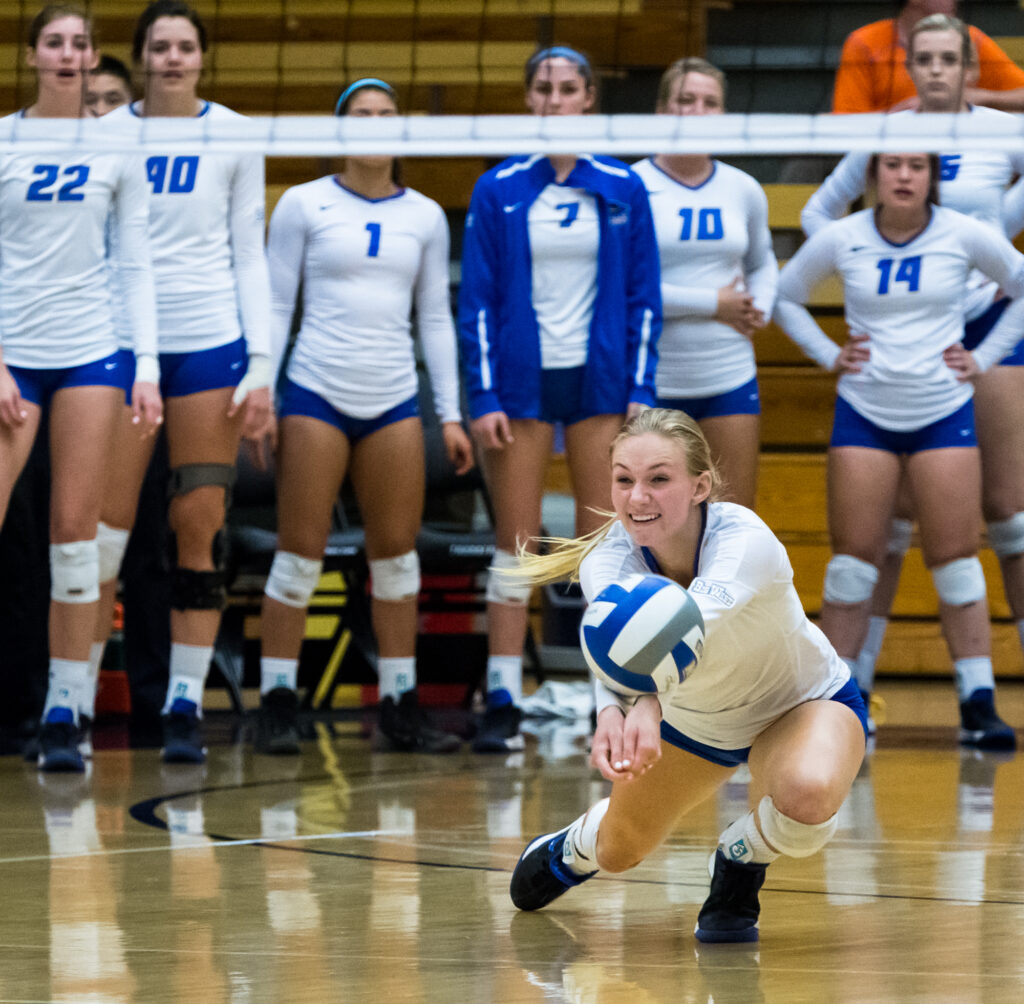 The UCSB women’s volleyball team enters Big West play tied for second in the conference with an 8-4 record. That’s a marked improvement from last year, when the Gauchos went 1-11 in non-conference play, but that’s all meaningless now that the real games are set to begin.

What does matter, however, is the confidence built from a solid, non-conference performance and the experience of UCSB’s returning cast of contributors. The team sits among some of the best teams in the NCAA across several statistics this season, [and returns reliable defensive specialist Emilia Petrarchi and last season’s NCAA leader in kills per set, Lindsey Ruddins.]

Ruddins is back and humming in 2018, as she’s already garnering a couple Big West Player of the Week Awards. This junior outside hitter is second in the nation with 5.57 kills per set so far this year, and leads the Big West in points per set as well.

She’s been set up primarily by freshman setter Olivia Lovenberg, who is 13th in the NCAA with 11.46 assists per set, second best among all freshman. Lovenberg, like Ruddins, has received a couple Big West awards already, and will be looking to add a handful more in conference play.

The Gauchos have been unable to develop a secondary threat next to Ruddins to keep opposing teams honest, something that could hold the team back these next several weeks. Torre Glasker, another outside hitter, is second on the team and 17th in the conference with 2.54 kills per set.

UCSB’s pre-conference schedule was light, featuring no ranked teams and only a couple teams on the bubble of NCAA prominence. Big West play, then, will be a test of the unproven squad.

They’ll be taking on a variety of talents, ranging from some of the worst teams to one of the best. What follows is a speculative ranking of those teams, and where UCSB likely fits in as it heads into the season.

Cal Poly – The 15th ranked team in the NCAA, the Big West appears to be the Mustangs’ if they want it. Led by outside hitter Torrey Van Winden (7th in the NCAA with 4.93 kills/set) and her sister, Allie Van Winden (8th in the Big West with 3.17 k/s), the Mustangs have a potent attack set up by freshman setter Avalon DeNecochea (55th in the NCAA with 10.32 assists/set). They’ve got two wins over #17 UCLA and will be seeking to defend their 2017 Big West title.

Long Beach State – The Beach enters Big West play a half-game behind UCSB and UC Davis at 8-5, but that’s with losses to #17 UCLA and #12 Oregon. They’ve got a stifling pair of blockers up front in Emma Kirst (1.06 blocks/set) and Yizhi Xue (1.00 b/s). The offensive load is distributed similarly, with Hailey Harward, Kashuana Williams and their almost three kills per set bearing the brunt of it.

Hawaii – The Rainbow Warriors are usually contenders in the Big West, and while their 4-5 non-conference record isn’t too impressive, they’ll likely be near the tops of the standings in a few weeks’ time. Two losses to #12 Oregon set the team back a bit last week, but they’ve got the tools to overcome. Setters Faith Ma’afala and Norene Iosia have Hawaii sitting in 28th in the NCAA in assists per set, and McKenna Granato leads the team in kills per set with 3.48.

UC Davis – Tied with UCSB with an 8-4 record, the Aggies are a well-rounded squad. They’re 38th in the nation in opposing hitting percentage and 47th in kills per set, but they’ve yet to be tested against a top-25 team. Malia Bolko is 21st in the NCAA with 5.38 digs per set as the linchpin of the defense, and Emily Allen leads the offense and is 5th in the Big West with 4.09 kills per set.

UC Irvine – Not much stands out about the 6-6 Anteaters from their non-conference slate. They dropped two games to top 25 teams, one to #23 Utah and the other to #8 Illinois. They’re not in the top 50 in the NCAA in any statistics and Haley DeSales and her 3rd-best 4.74 digs per set is their only top-three Big West statistic. Conference play will be revealing for this team, with a lot of space to move up, or down.

Cal State Fullerton – Fullerton also enters Big West play with a 6-6 nonconference record, but they don’t have the excuse of any top 25 losses. Their schedule, compared to Irvine’s, was much easier, slotting them in below the Anteaters. The Titans are 49th in opposing hitting percentage, thanks largely to Maya Riddlesprigger’s 4th in the Big West 1 .00 blocks per set.

UC Riverside – The Highlanders are 25th in the NCAA in digs per set, but all that’s gotten them is a 5-6 record, even without any top 25 games. Setter Chelsea Doyle is third in the Big West with 10.00 assists per set and 9th with 3.48 digs per set. Kaiulani Ahuna has provided the bulk of their offense with 5.25 kills per set, 4th in the NCAA, but she’s also far and away 1st in the Big West with 93 errors.

CSUN – Statistically, the Matadors are the worst team in the Big West. They’re a conference-worst, coming in 4-8, although that includes losses to #11 Florida and #13 Washington. They’re last in kills, digs, blocks and assists per set, as well as hitting percentage. They’re only second-to-last in service aces per set, however, so at least they’ve got that to hold on to.