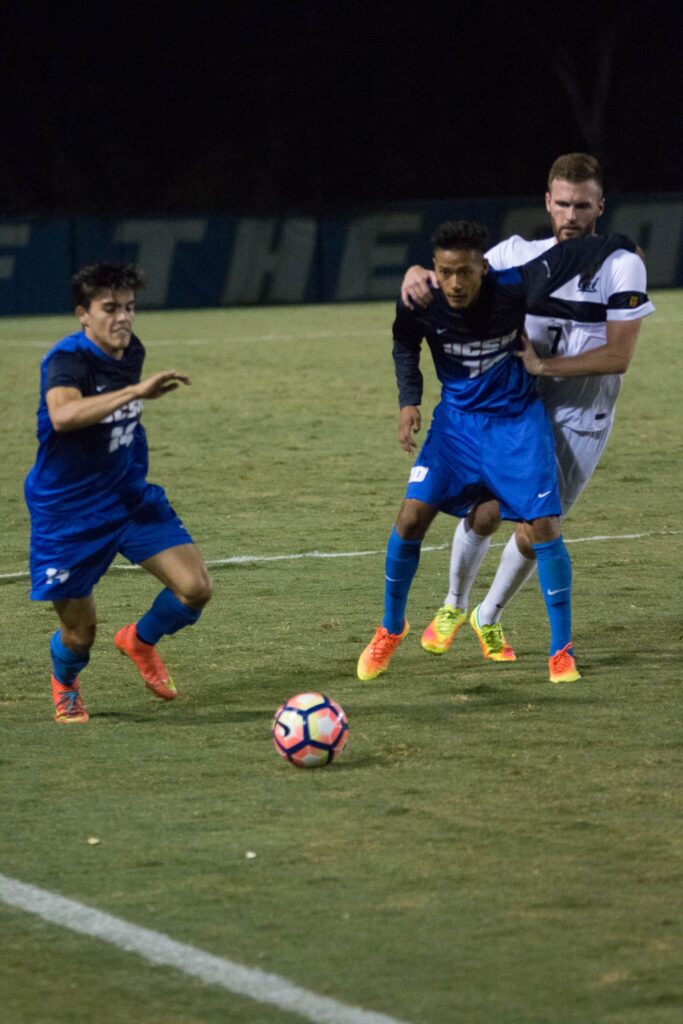 “A step forward” is what head coach Tim Vom Steeg deemed his team’s 3-1 dub against long-time conference competitor UC Riverside; however, the game doubles as the 250th win of his 20-year career, making it more of a milestone than just a step in the right direction.

Last night’s win kept the Gauchos’ record spotless at 2-0 while their fellow California-based opponents took yet another hit, sending them to a 0-2 overall count.

The two UC’s met twice last year in conference play, the second time ending in a sore 0-1 loss in Big West quarterfinals that knocked Santa Barbara out of the running for the championship. As Vom Steeg described in last night’s post-game press conference, this year’s victorious outcome constituted just one part of the ongoing “redemption tour” that has so far defined the 2018 season.

Though familiar with their competitor, it wasn’t until the 37th minute that the Gauchos caught up to the Highlanders’ seemingly unpredictable gameplay and made their mark offensively. The play began with a free kick taken from the left side by junior Thibault Candia. Frontman Sahid Conteh, posted opposite of his counterpart, caught the rebound off the goalie’s initial save and crossed the ball into the box where Faozi Taeb headed it into the net.

The junior transfer’s goal unleashed an unrelenting attack on the Highlanders. UCSB’s defense remained solid throughout the game and seldom allowed the opposing attackers quality chances on goal. Their outstanding coverage ensured routine saves for the unchallenged goalie Ben Roach.

Meanwhile, UCSB’s offense offered little reprieve to the UC Riverside roster. Santa Barbara increased its passing through the midfield, seamlessly transitioning the ball from one player to another as each maneuvered their way through their opponent.

It took just ten minutes for Candia to play a pass to midfielder Joseph Ammer who sent it up the field to freshman Carter Clemmenson. Facing away from the goal above the 18 yard box, Clemmenson broke the defenders with a one-touch that allowed him to launch the ball over the goalie’s head.

If not for midfielder Daniel Aguirre’s last minute goal, the Gauchos’ offense would have gone unmatched. Perhaps the most dangerous attacking player on UCR’s roster, the sophomore took advantage of a lapse in defense, sending a powerful 20 yard shot that cleared the inside of the post and cut UCSB’s lead in half.

Once again, however, Santa Barbara reasserted itself. With minutes left in the game, Axel Mendez, a senior midfielder, fooled the UCR defenders in what seemed like a routine way to kill time. Instead, Mendez took the ball along the end line and played it beautifully into his new teammate Migel Gomez, firing a headline-worthy goal into the top left net in the 90th minute.

It is this baseline cohesiveness that has so far been vital to the the Gaucho’s success. Stacked with 10 returners and four or so solid newcomers, the 2018 roster is a rarity and a luxury at its core. Able to substitute player for player without compromise—replacing Billingsley with Clemmenson, for example—Coach Vom Steeg sees huge potential for the upcoming season.

However, Santa Barbara prepares to take the road for their first away games of the season this week. The team will face stiff competitors Portland and Seattle University each of whom will test the Gauchos’ early success. The weekend kicks off at the Nike Portland International on Friday August 31 at 7pm.