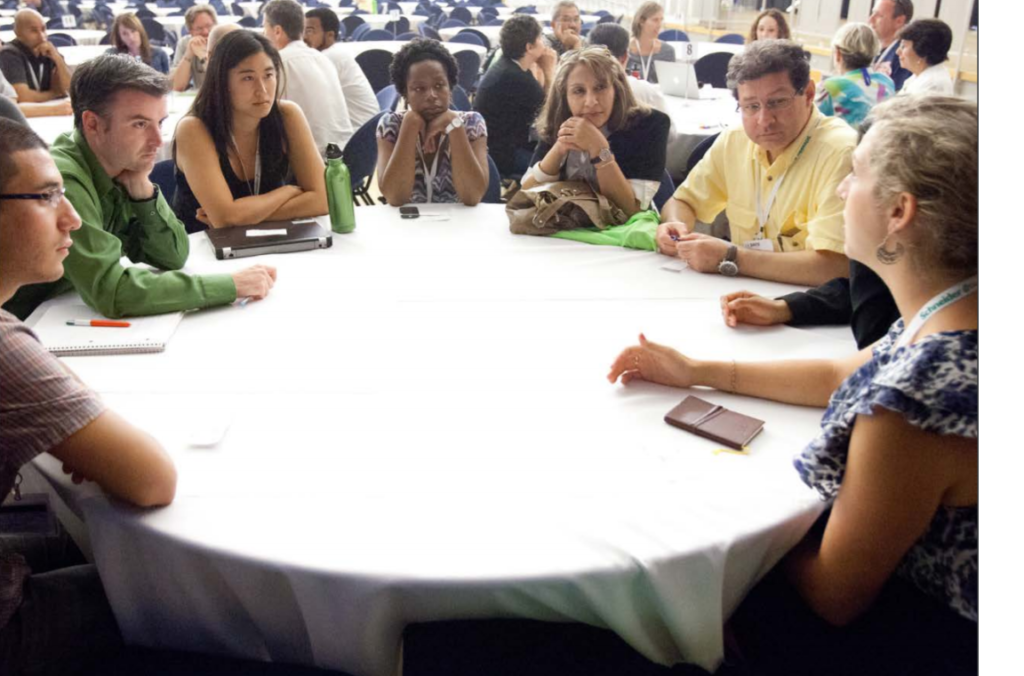 Collaborators discuss ideas for achieving carbon neutrality in the UC system. / Courtesy of Strategic Communication to Achieve Carbon Neutrality within the University of California, Report of the UC TomKat Carbon Neutrality Project

Launched in 2013, the University of California’s Carbon Neutrality Initiative (CNI) aims to reduce UC carbon emissions to eliminate its reliance on fossil fuels and have net-zero emissions by 2025, while aligning with the university’s core missions of education, research and public service.

From a diverse council consisting of researchers, administrators, faculty and students from across the UC system, the report “Strategic Communication to Achieve Carbon Neutrality within the University of California” outlines tactics to meet the university’s ambitious goal of carbon neutrality by 2025.

The report is part of the TomKat UC Carbon Neutrality Project, which focuses on developing feasible, scalable solutions to address eliminating university reliance on natural gas and to increase communications and greater awareness of the CNI. Another team released a second report in February 2018 to address strategies to replace UC’s natural gas usage with climate-friendlier options. The CNI states it will need continuing efforts by stakeholder groups and multifarious parties, as well as engagement and cooperation across the UC community to reduce the university’s carbon footprint.

“Right now, much of the university community is not aware of the initiative or the goals of the initiative, and there’s better chances of success if we have a large supportive group of students, faculty, staff, besides just the experts who are working on this. This will benefit from support for some of the investments that are needed, as well as bubbling up new ideas,” said Roger Bales, one of the leads for the working group on strategic communications to advance the CNI and an engineering professor at UC Merced.

The university’s findings are applicable beyond the UC system to other large energy institutions aiming for carbon neutrality. Beyond the technical or communications aspects, this is due to methods and ideas that speak to broad human behavior, as noted by Stacy Rebich-Hespanha, also a working group lead as part of UC Santa Barbara’s National Center for Ecological Analysis and Synthesis (NCEAS).

“At the most fundamental level, what we’re talking about are human motivation and human behavior and what makes people get excited, enthusiastic and willing to make something happen. That is, ownership and involvement and creating models that can scale very broadly. It’s about inviting people into the creative decision-making process and helping them to make the project theirs in certain ways that satisfy the individual participants’ goals but also the institution’s goals and moving projects forward that way. Those are very scalable, transferable ideas to any kind of organization that’s facing the same kind of challenges that UC is,” Rebich-Hespanha said. 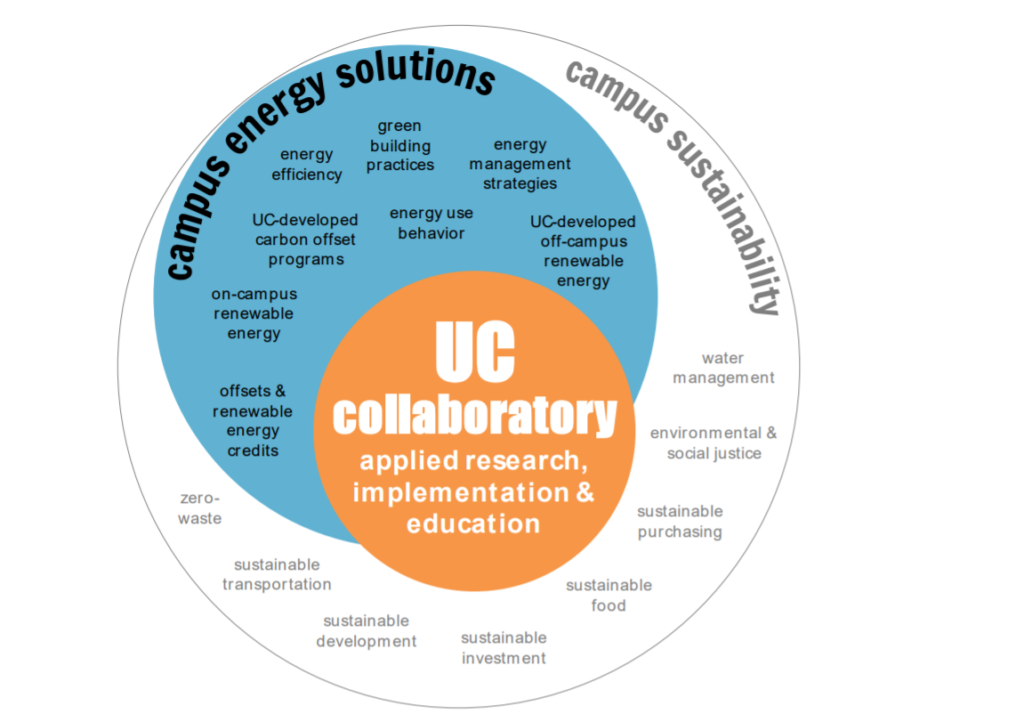 The proposed collaboratory’s relationship to campus sustainability and energy solutions on campuses and across the UC system. / Courtesy of Strategic Communication to Achieve Carbon Neutrality within the University of California, Report of the UC TomKat Carbon Neutrality Project

One of the report’s two central recommendations is to create system-wide, campus-based “collaboratories,” or living labs with applied-research and education opportunities for campus energy solutions through classes, energy-management projects and other CNI components aligning with the university’s core missions. The collaboratory is intended to bring greater visibility to the CNI’s campaign and develop a foundational ethos for UC by providing a way to bring students, faculty and staff together to work together on energy solutions.

“By using the UC as a collaboratory for energy solutions, we see that it’s easier to produce scalable solutions,” Bales said. “For example, maybe what’s happening at Santa Barbara can be applied to Los Angeles, or it can also be applied to other universities. So we need to learn from each other and have a ready way to share that information. A collaboratory would provide that way to get the word out on what works and what doesn’t work.”

The second headlining recommendation calls for data transparency to facilitate champions of the CNI to engage others and communicate the goals and strategies for carbon neutrality within their local campus communities. The data will allow greater access of information about campus energy usage and pathways pursuing carbon neutrality to students, faculty and staff. This includes directly acknowledging potential challenges and costs.

“Right now, throughout the UC as a whole, there are a lot of people who are passionate about taking action to address climate change amongst student bodies. We realized it’s not about convincing people that something useful will happen, it’s more about showing a pathway that looks feasible to make things happen. Where it becomes really difficult is when taking these kinds of actions is seen as preventing or taking away from achieving a mission at the university. Then people start thinking of it as something where if we invest resources into achieving an environmental goal, then we’re going to have to give up things that we care about elsewhere in terms of education affordability or research output,” Rebich-Hespanha said.

“I think what the ultimate discovery that our group made is that it’s possible to think about things not in that way, but instead in another way, of tying them all together so that taking action that helps reduce the university’s emissions also is helping to achieve the research mission and education mission. Coming up with as many opportunities for those kinds of projects is a really important way to carbon neutrality and emissions reductions more generally for the university forward,” she said.