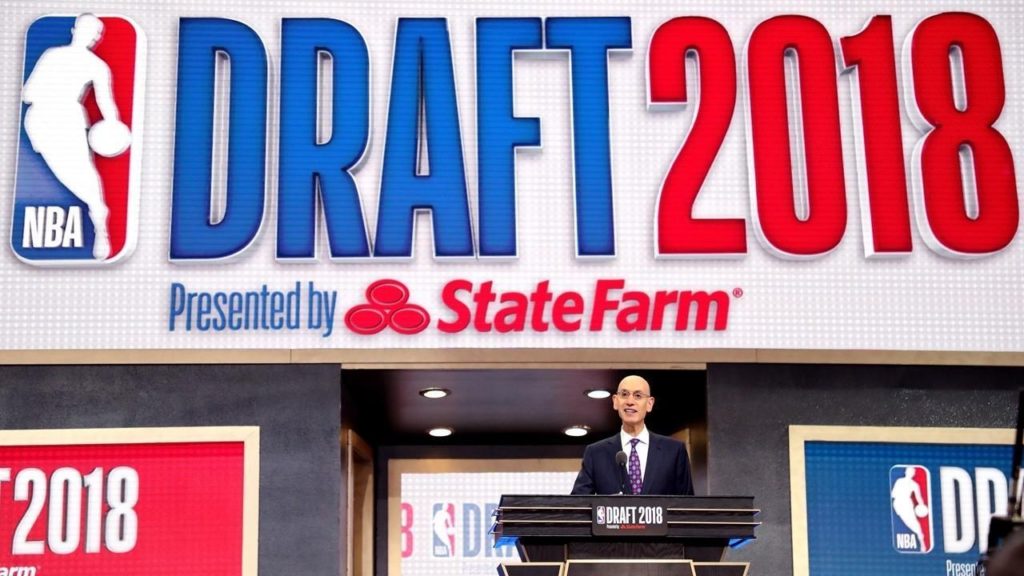 no copyright infringement is intended

I know what you’re thinking: they do this every year. But ESPN’s presentation of the 2018 NBA draft stood out from their previous blunders in ways that left me wondering how anyone else was taking in the barrel of chum that was this year’s coverage. A few looks at social media confirmed that I’m not crazy (take that, my therapist), and also not the only one to cringe at every forced player comparison made and blatantly-misguided interview question asked.

It’s unfortunate that any draft day should warrant this kind of criticism because, after all, it should be about the players selected, a majority of whom are younger than half of UCSB’s undergrads. In fact, 11 of 14 players selected in this year’s lottery are 19 or younger. ESPN should not only highlight these newcomers but should provide insightful basketball analysis, instead of reality-TV content.

Any analysis, especially insightful, is a stretch for today’s ESPN, but some of last night’s commentary was simply disappointing. The top prospects of this year have been talked about for months now, so there was a real opportunity presented for the network to capture the long-awaited selections with a dialogue pointing to the next step for the draftees and their respective franchises. Instead, the well-known highlights of each player were reiterated with little acknowledgement of where the players were headed. It doesn’t take the notion of draft night to once again explain Deandre Ayton’s athleticism, or Luka Doncic’s success overseas. On draft night, it should be about what’s next for them in the league.

In the immediate moments following the announced destination of each prospect, the chance to talk NBA basketball was missed. In the case of Ayton, a player expected to go No. 1 in the draft for quite a while, his destination was only touched upon. The Suns have exceptional young talent to welcome Ayton; however, the brief mention of Ayton’s future teammates was underwhelming and hardly informative. Perhaps the aspect of time between picks hampored any detailed analysis, so maybe the section of the show devoted to player introductions should’ve been a time for actual NBA commentary.

Player introductions, which were done for the first (and hopefully last) time in draft history last night, should’ve been the first sign of botched coverage. Most of the expected lottery picks were featured walking down the stage with family members or friends alongside them, which is great for celebrating the players, except every player already gets plenty of camera time once the actual draft begins. Players are shown, oftentimes with their friends and family, awaiting picks at their tables, on stage with commissioner Adam Silver, being interviewed after they’re picked, and the abundance of media obligations awaiting them after their interviews. Why would the players need even more screen-time? Because the ESPN commentators actually have that little of importance to say.

Beginning with Chauncey Billups, who earned my respect as a player during his Detroit years, Billups’ segment of player comparisons was terrible and frankly a waste of time. It’s understandable why comparing young draft picks to past and present NBA players is helpful in characterizing a players’ potential, but some comparisons appeared forced and few were reasonable. Aside from the weird trend of matching the race of pick and compared player, Billups failed to match playstyles altogether.

Jaren Jackson Jr., selected fourth, was compared to Joakim Noah. As Billups made this comparison, Jackson Jr.’s highlights were shown with him spreading the floor and hitting threes. Joakim Noah, as anyone who’s watched him play should know, isn’t a big three point shooter, or shooter in general. Noah has an NBA career three point percentage of 0.00. Billups had to have done some preparation for the top prospects and their comparisons, and obviously it’s uncertain how every draftee will turn out, but some of his choices made it seem like he was drawing names out of segregated hats.

If the racially-aligned player comparisons weren’t awkward enough, the post-draft interviews for each player picked up the slack. After being picked, shaking the commissioners’ hand and walking across the stage, the players then faced a barrage of poor interview questions. Simply pointless questions regarding “the moment” and “what their team can expect” were repeated for each pick, with equally repetitive answers. How else are they supposed to feel? They just got drafted by an NBA team as a teenager, we’re sure that’s awful. And immediately after being drafted they had to sell themselves as a player again? It was ridiculous and a blatant move by ESPN trying to generate drama.

Standing out among the interviews was Colin Sexton’s. Following his selection at 8th overall by Cleveland, Sexton was coaxed by the interviewer to make a pitch for LeBron to stay. Talk about awkward. Anything the Cavs do to retain The King will likely include packaging their newest draft pick in a trade for another star, just like they did with Andrew Wiggins in 2014. As if Sexton was supposed to say, ‘LeBron please stay, I promise I’ll know the score during the final seconds of a playoff game.”

On top of it all, ESPN reporter and columnist Adrian Wojnarowski tweeted out virtually every pick before it happened, which only cheapens the draft coverage itself even further. Maybe my sports expectations are too high for a Disney-owned company, and maybe the point of the show is to be just that, a show. But, the difficulty of finding non-conglomerate, real-time draft news should indicate where the dominating national sports coverage is heading. If the NBA draft is developing into a reality show, how soon until other ESPN/ABC (both Disney) NBA events like All-Star Weekend and End of Year Awards are ruined? Oh wait.