The Daily Nexus
News
Warm & Wild Nights at Woodstock’s Trivia
June 7, 2018 at 2:11 am by Shomik Mukherjee

It’s the perfect representation of Isla Vista’s collegetown camaraderie: nearly 100 people spill in and out of a warmly lit Woodstock’s Pizza every Tuesday for its weekly Trivia Night.

College kids everywhere take to trivia events about as well as they do to pizza and beer, but there’s something distinctly Isla Vistan about the tradition at Woodstock’s, which opened its I.V. location in 1982.

The patrons shout, groan and embrace each other as question after question leaves them with tip-of-the-tongue quandaries — the classic “I was just reading about this last week!” frustration. Students cram into booths, often planting themselves on empty pizza boxes atop beer kegs to have a place to sit and participate.

Shift manager Robbie King does nothing to quell the carnivalesque display. Instead, he walks among the flurry, announcing questions, collecting response sheets and withstanding drunk hecklers. He has no time for disgruntled trivia-goers; there are questions to ask and hearts to crush. 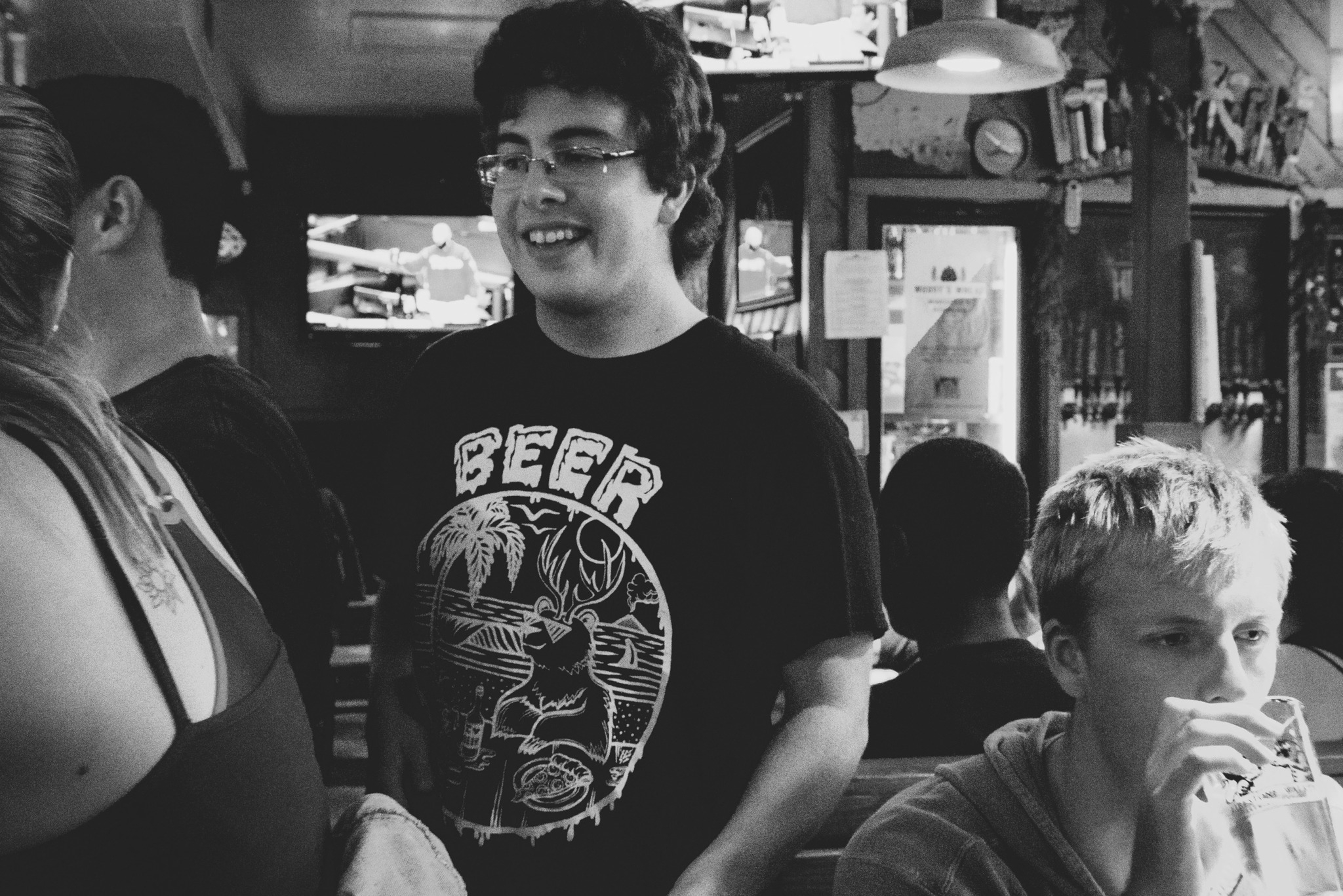 He will, however, accept the occasional hug, especially when a team cracks one of his tougher quizzes.

“I feel like people really respond when you’re just out there,” King said a few hours before Tuesday night’s festivities. “If you’re going for it, especially in I.V., people aren’t going to judge you for being confident and out there on the microphone.”

King has worked nearly five years at Woodstock’s, putting in time at both the UC Santa Barbara Arbor and I.V. locations. He graduated from UCSB last year with a degree in history.

At his Tuesday showing, which marked a year since he took over as the Trivia Night host, it was clear King’s evenhandedness has earned him respect — and even admiration.

One team name on Tuesday was, “Robbie is a Tender Lover.” Another dubbed itself, “Leave Robbie Alone!”

“People won’t believe that I’ll actually say that over the microphone,” King laughed.

Unlike I.V.’s other evening draws, like the discounted premium beer at Woodstock’s Wednesday pint nights, Trivia Night gives Isla Vistans something to do. There are endless pitchers of beer sold during the event, but the evening’s lure isn’t rooted in drinking alcohol for its own sake.

“It’s a part of I.V. culture that isn’t just drinking,” King said. “Sure, there’s plenty of drinking, but it’s all about interactions people are having. It’s competition — friendly, most of the time. I really love doing it because I have a good energy about it and people come in here with a good energy about it.”

Themed events generate the biggest crowds. One night saw all of the questions styled around the television series “The Office.” So many showed up that some groups scurried onto the floor while participants leaned in over the patio rail. Another five-week derby went, decade by decade, from the 1960s through the 2000s. I.V. packed the house, even during UCSB’s Dead Week.

But the bare-bones, general-knowledge questions are the real challenge, especially when King reaches for topics just out of the average attendee’s grasp.

One of his favorite questions from the event’s history? “What do you call a female sheep?’” he said. The subject seems banal, but the answer would elude many: an “ewe.”

“A lot of people thought they should know that but didn’t, so I got like several, ‘This question sucks,’ ‘Fuck this question,’ ‘I can’t believe you asked this,’” King recalled. “I didn’t realize the ewes generate so much controversy.”

King deep-dives into Wikipedia each week to come up with a balanced spread of head-scratchers. What drew him toward the event as a freshman, he said, was the element of “mental prowess.”

“It’s a funny sort of knowledge, really,” he said. “I get like a lot of little tiny details about things.”

In a year of running the show, King has absorbed his fair share of trivia. In fact, he can now tell you which team appeared in the most Super Bowls during the 1990s.

“How useful is that? I don’t know, but now I have that filed away.”

A version of this article appeared on p.6 of the June 7 print edition of the Daily Nexus.

I wish I was as cool as Robbie.