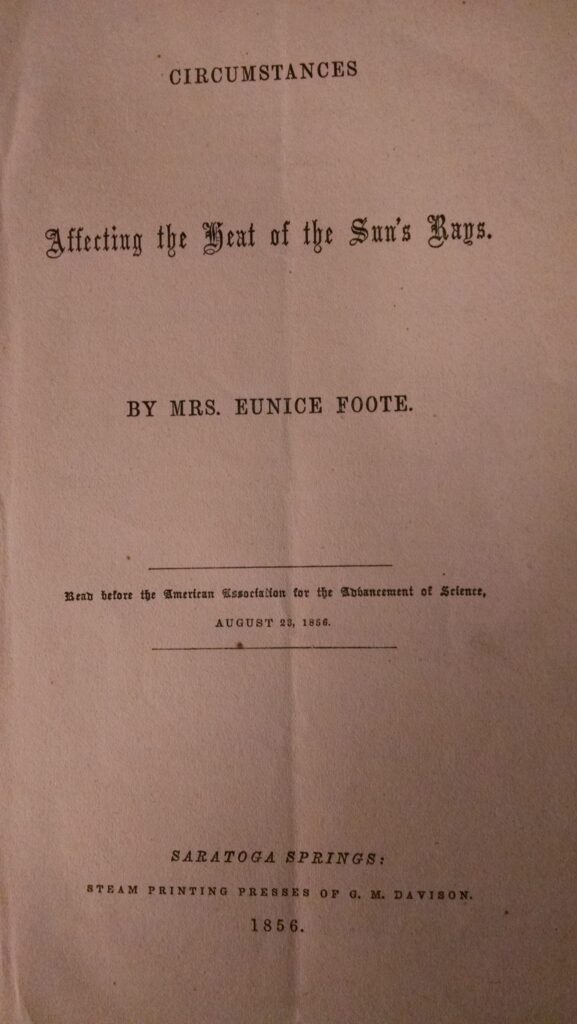 The cover for the breakthrough paper of Eunice Newton Foote, the first person to demonstrate that carbon dioxide is a greenhouse gas and that adding more to the atmosphere will cause global warming, is shown. / Courtesy of John Perlin

When it comes to crediting one of the most consequential discoveries of the past two centuries, the scientific community is mistaken. Over 150 years ago, Eunice Newton Foote released her findings on carbon dioxide’s emitting power of heat, setting the stage for the field of climate science as well as ushering in the era of recognition of greenhouse gases and their effects on global warming.

Foote delineated her key discoveries in the paper “Circumstances Affecting the Heat of the Sun’s Rays” where she stated that carbon dioxide is the greatest heat-retaining gas in the atmosphere and that more carbon dioxide in the atmosphere will lead to a hotter Earth. Her paper was presented on August 23, 1856 at an annual meeting of the American Association for the Advancement of Science (AAAS).

However, Foote was unable to present her own findings, which were instead presented by a male professor, due to the fact that Foote was a female and women were not respected as true scientists at the time. As it happens, Foote was just one of two female scientists who were even permitted to be members of the AAAS in 1856.

Aspiring to illuminate the untold story of Foote, a symposium was held at UCSB on May 17, titled “Science Knows No Gender: In Search of Eunice Foote Who 162 Years Ago Discovered the Principal Cause of Global Warming.” The event was co-sponsored by the Environmental Justice (EJ)/Climate Justice (CJ) Hub of the UCSB Orfalea Center for Global and International Studies, whose goal is to promote scholarship regarding environmental and climate justice by connecting people from around the world who share interests and passions in striving for justice on a global scale.

A speaker at the event, John Perlin, a research scholar in UCSB’s Department of Physics, has spent three years investigating Foote and her work. He described her narrative as “one of America’s great stories that has never been told.”

Perlin compared the lack of knowledge regarding Foote’s discoveries to other household name scientists. “It’s like no one knowing about Einstein or Darwin and then doing their work even though it was available, and simply no one had seen it. It makes Foote an incredible scientist, whether male or female,” Perlin said.

Perlin’s research sheds light on the fact that Foote’s findings predate physicist John Tyndall by at least five years, although Tyndall is currently considered to be the discoverer of carbon dioxide’s greenhouse gas effects.

Convener of the EJ/CJ Hub and professor of sociology at UCSB John Foran addresses the fact that Tyndall’s work published five years after Foote received attention from the scientific community, which resulted in the accreditation of much of Foote’s research under Tyndall’s name.

“John Perlin effectively shows that it is almost inconceivable that Tyndall did not know of Foote’s work; yet Tyndall not only doesn’t credit it, he almost goes out of his way to say that no one has ever really written about the problem,” Foran said.

“By a textbook definition of plagiarism, which is to omit credit for someone’s ideas and put them forward as if they are solely your own, it’s a case of plagiarism, and it can be attributed in good part to Tyndall as a product of his time, where science was male-dominated and where Foote, at best, would have appeared to be an amateur scientist coming from a less scientifically advanced society in terms of America compared to the United Kingdom,” Foran added.

In an effort to address this lack of accreditation, the symposium portrayed Foote’s story through the lens of a comprehensive history.

“Everyone’s breakthroughs are not achieved as individual accomplishments, rather they build on previous science, and so what John Perlin is trying to do is restore Foote to her rightful place in that history,” Foran explained. “In doing so, he is drawing attention to the remarkable advances that this represented for women in science.”

By unveiling Foote as one of the greatest scientists of the last 200 years, Perlin is hoping to provide a heroine that young women can look up to.
“The goals of the symposium were to bring to light this amazing scientist who few knew about, to inspire young women to take her example and realize that despite continuing prejudices, science knows no gender and to illustrate the deep roots that climate science was built upon,” he stated.

Perlin believes that the symposium could act as a launch for further recognition of Foote’s accomplishments, including an exhibit at the UCSB library or lectures on campus. Additionally, he emphasizes the existing Tyndall Centre for Climate Change Research in the UK and his hope to one day see the Eunice Foote Center for Atmospheric Studies at UCSB.