The Daily Nexus
Sports
The Boy’s Club: Being a Woman in a Male-Dominated Sport
May 24, 2018 at 5:07 am by Hannah Jackson 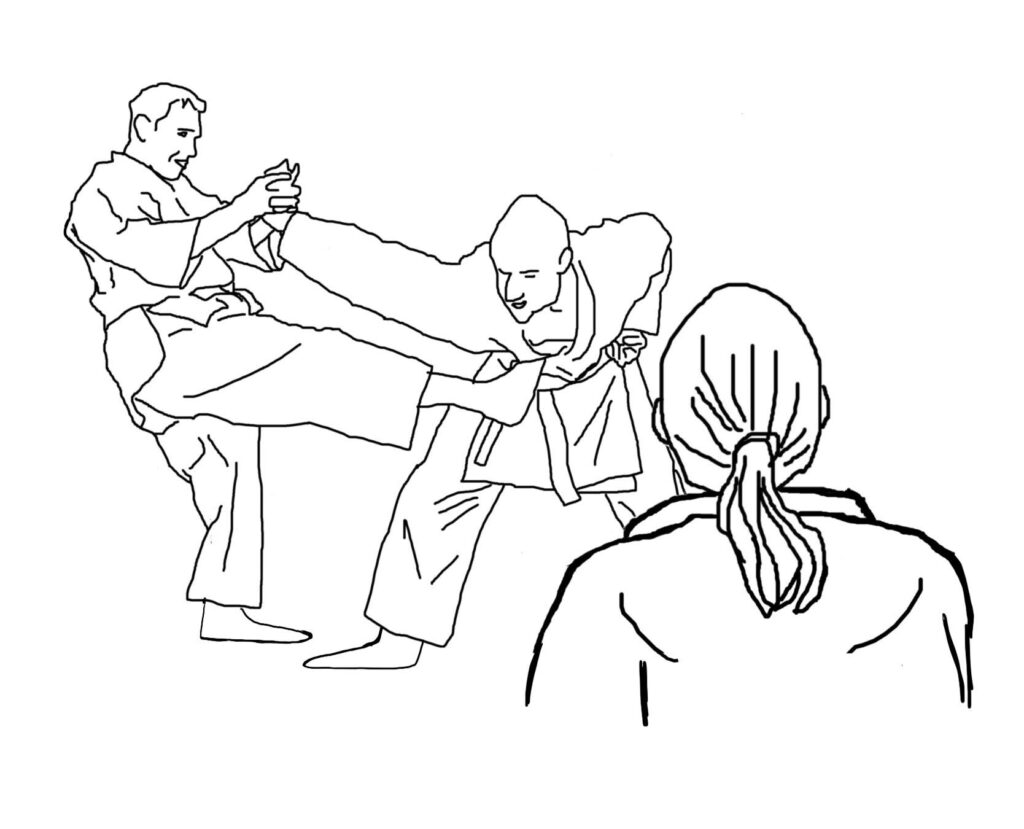 I walked into my first karate class as a bright-eyed, ambitious first-grader who fancied herself a tomboy. I had expressed interest in playing football, but my parents had wanted me to take some form of self-defense classes and threw me into the United Studios of Self Defense — a mixture of Kung-fu and Shaolin Kempo Karate.

Throughout the 10 years I spent doing martial arts, I saw many people from every walk of life come and go, but most of the concrete figures in the dojo were men. Being a young girl in a male-dominated sport certainly had its ups and downs. It could be incredibly disheartening to feel lesser than my peers simply because of our biological differences, but by that same notion, it was incredibly empowering to feel just as accomplished, if not more so, than the boys.

It is really disorienting to be put on a pedestal for your gender when you’re six years old. As a child I lacked the self-awareness to realize it, but ultimately it became clear as I grew older that every time I stepped into the dojo, I was representing my entire gender. Being a spokesperson for all women — specifically young women — was a huge burden to bear, and I constantly felt as though I had to prove myself in the name of my gender. Prior to my time in karate, I had only done activities that aligned with my gender, like ballet, gymnastics and an all-girls soccer league. But in this space I was an outlier, completely outnumbered by boys.

Growing up in the dojo played an interesting role in the development of my mental health. Meditation played a big role in karate: Every class and private lesson started and ended with a moment of meditation. Mindfulness and a clear headspace were always preached, but at the same time, being in a male-dominated space had a big impact on my state of mind. Acting too much “like a girl” was a disadvantage, and the effort to suppress the feminine aspects of my personality was both mentally and emotionally taxing. I hated crying in front of the boys, and ultimately I became too scared to do things that would leave me in a vulnerable position.

After getting punched in the face at a tournament, I stopped fighting for about six months because I was afraid of getting caught off guard again, even though that’s the nature of the sport. Karate has had a lasting effect on my mental state; I am hyper-vigilant of my surroundings — some could maybe say paranoid — and I still flinch when anyone comes close to my face. When I find myself in potentially dangerous situations I always try to strategize a way out.

The most challenging aspect of being a woman in a male-centric sport was recognizing my limitations and differences from my opponents and trying to use that to my advantage. There were only three other girls in my age group during my 10 years of karate, all of whom quit before I earned my black belt. This gender disparity left the vast majority of my interactions, including sparring, with boys. Sparring is a form of fighting, often done with protective gear like helmets, gloves, shin guards and mouth guards. We would also practice open-hand fighting with no gear, called kumite.

To say I got pummeled by men — both children and adults — would be an understatement. When I was 12, I was in the fifth hour of a seven-hour-long test and was paired up for a sparring match with a 20-something-year-old man who had an advantage of at least a full foot and 150 lbs. He did not take it easy on me, and the experience resulted in my first-ever panic attack. I will never forget how he yelled, “Hit me! Hit me harder!” as his fists beat me over the head and his kicks jabbed me in the solar plexus.

That being said, some of the most vicious and brutal fighters I have ever engaged in combat with have been women. The first fist ever to punch me in the face belonged to a very large eight-year-old who absolutely annihilated me in a tournament matchup. Some of the worst pain I have ever experienced came from a mom in her 40s named Liz who bent my finger backward so hard I thought she broke it.

In my experience, I have found that men are often hesitant to exert their full force on a very small pre-teen. Almost every woman I have ever fought has seemingly shared the subconscious consensus that while we don’t enjoy beating each other up, it is for our ultimate benefit and betterment as fighters.

The necessity of taking self-defense classes became more glaringly obvious as I got older, and the emphasis on gender in the dojo became very apparent. The boys who did karate did it because they were hyperactive kids and they needed to learn discipline, or they wanted to learn to fight with swords and nunchucks. But for the very small female population — regardless of age — it was always about having the ability to defend ourselves should we ever be in a situation where it was necessary. From the age of 12 onwards, my sensei made a very big point of reminding me of all of the possibilities of violence against women that lurked beyond the walls of the dojo.

The constant emphasis on violence against women, while it was important to recognize, became overkill in my mind. I was fed a narrative that made me believe that every stranger was out to cause me harm, and the message transitioned from one of caution to one of causation: “If you do x, y, z, all of these horrible things could happen to you!”

Going to karate became a chore because if I didn’t learn to defend myself as adequately as I could, whatever could happen to me would feel like my fault, rather than the fault of someone potentially looking to cause me harm. While the environment of the dojo was conducive to physical strength and agility, it also conditioned a chronic pessimism and cynicism.

When I earned my black belt at age 14, I became the first girl under 18 and the third woman in the history of my studio to achieve that feat. And while I may not be able to break a board with my bare hands or knock a man unconscious with a single punch, I put in just as much work, if not more, than any man.

Despite the fact that I stopped doing karate, it is an enormous part of my identity for better and for worse. Even though there are no female Grandmasters as of right now, they are coming. It may not be me, but the next generation of girls who infiltrated the boy’s club is growing up and they are kicking ass.