The Daily Nexus
Student Gov
All Newly-Elected A.S. Senators Sworn In, Meeting Ends With Full Agenda Unaddressed
May 24, 2018 at 10:39 pm by Evelyn Spence and Sanya Kamidi

The 69th Associated Students Senate held a special meeting on Thursday afternoon but were unable to make it through the agenda because the Senate was “not cooperating,” according to Internal Vice President Steven Ho. 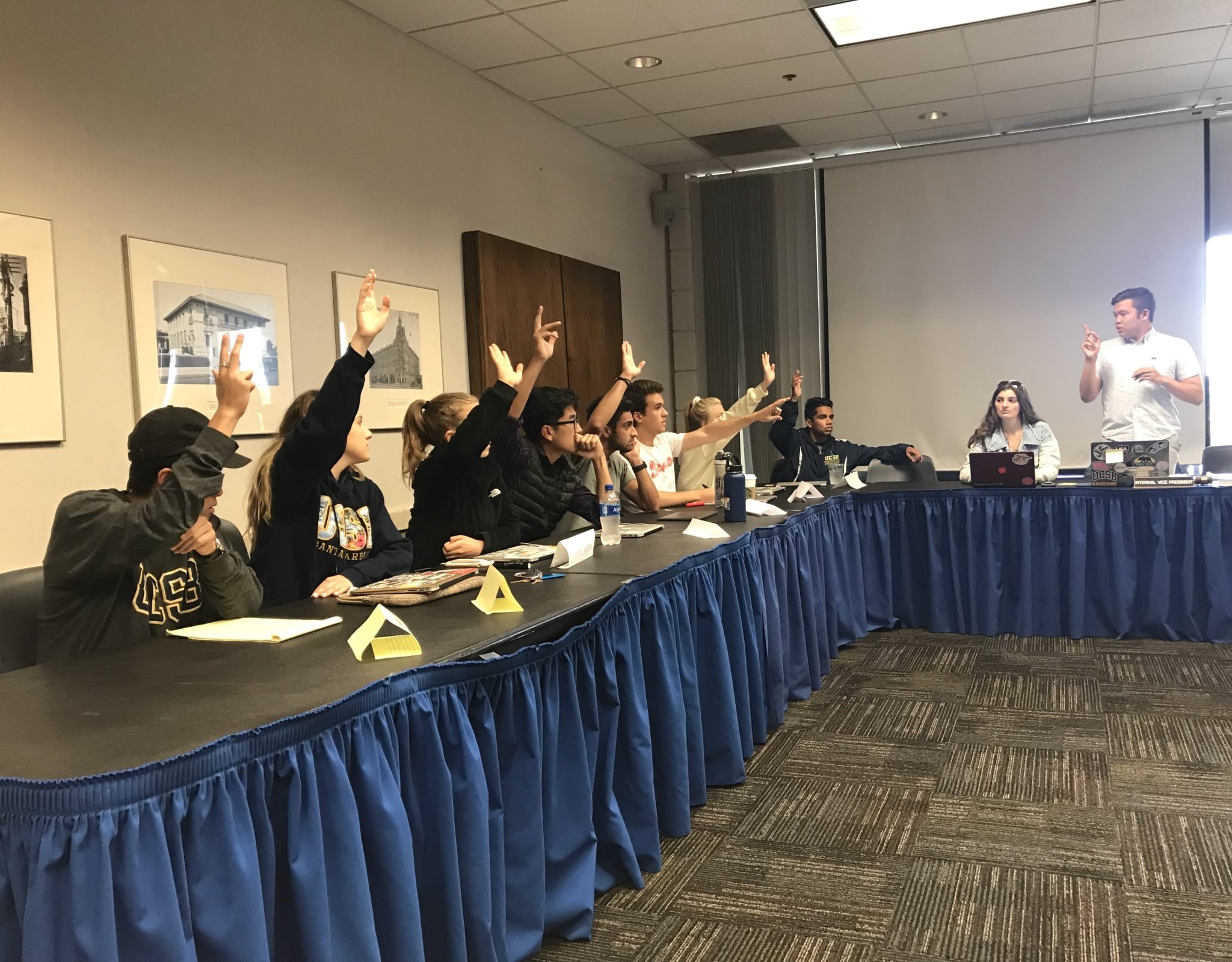 After a 60-person protest forced the Senate’s first meeting to prematurely end on Wednesday evening, Senator Rafael Cornejo motioned to temporarily move the meeting to a closed session after the 24 new senators and two of the executives were sworn in.

Only senators, A.S. staff members and former A.S. executives are allowed into the room during a closed session, according to A.S. Executive Director Marisela Marquez.

Cornejo cited last night’s protest as the reason for the motion, saying the 69th Senate’s first meeting was “kind of a lot for everyone.”

“I just want to make sure that everyone in this room feels very comfortable and that mental health is put as a priority,” Cornejo said during the meeting.

The vote to close the session was presented three times, failing twice before it passed 16-5 at approximately 2:30 p.m.

Ho could not be reached for comment regarding the Senate’s discussion during the closed session.

The meeting was reopened to the public at around 3:30 p.m. External Vice President for Local Affairs Jeike Meijer was then sworn in, and the Senate began to address the meeting agenda.

The majority of the senators, however, had not yet been trained and were unaware of how to proceed with the meeting logistics.

“Clearly we all really don’t know what we’re doing,” Senator Allison Adam said during the meeting, with several senators echoing her sentiments.

After Marquez’s approval, a few of the former senators sat in the audience and helped the new senators navigate the logistics. 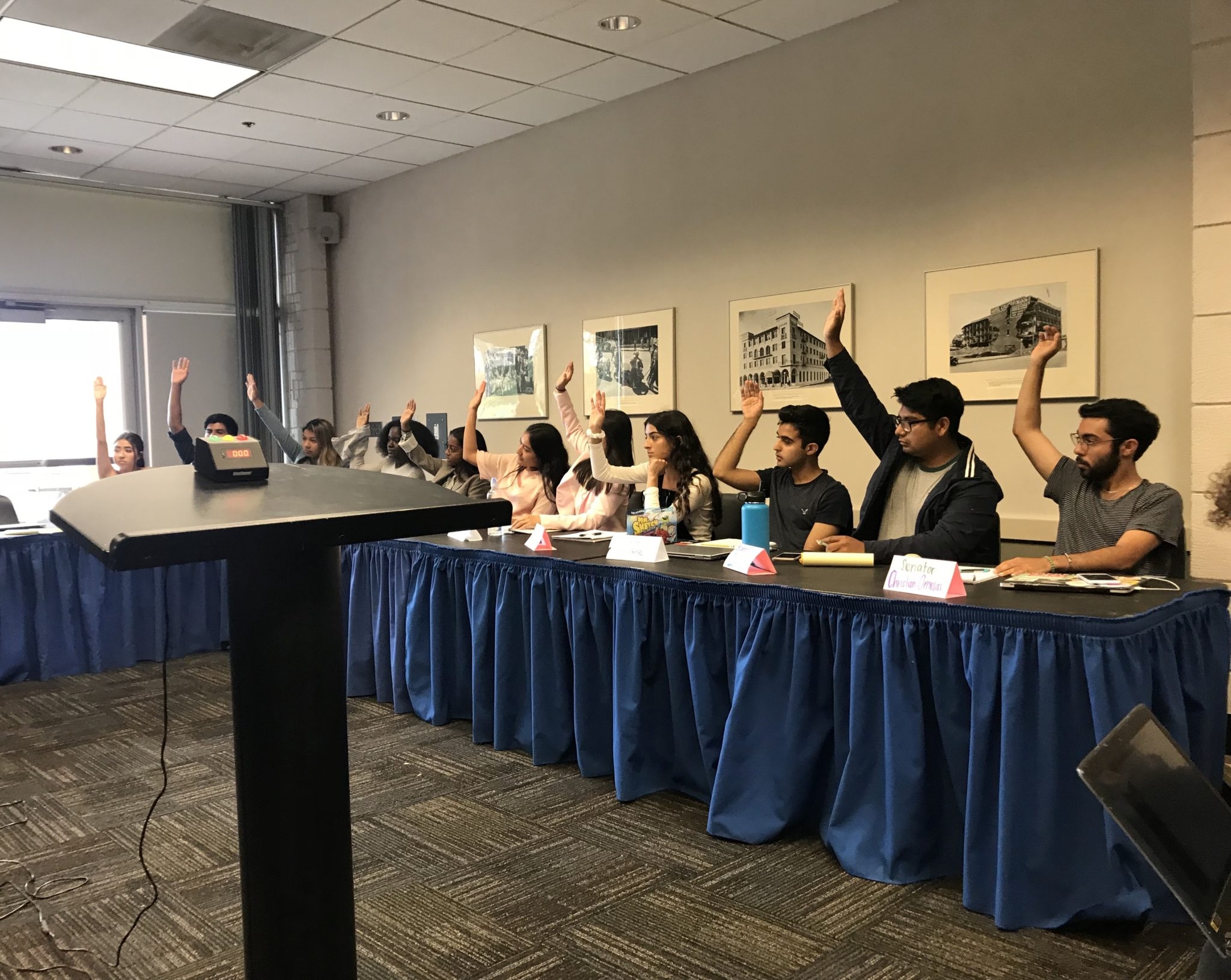 The majority of the senators had not been trained and struggled with meeting logistics. Evelyn Spence / Daily Nexus

The Senate also could not agree to accept the minutes from Election Board’s Monday meeting. The minutes explained the board’s decision to hold a special election during Fall Quarter 2018 for the External Vice President for Statewide Affairs (EVPSA) position.

The board disqualified EVPSA-elect Mayela Morales last week. Elections Board has not released the cause for Morales’ disqualification due to “confidentiality” reasons, Elections Board Vice Chair John Paul Renteria said during Thursday’s Senate meeting.

All candidates who ran in the spring election will be eligible to run for the position of EVPSA in the fall election, Renteria said. However, candidates must run independently rather than with a political party.

The meeting was adjourned before the senators could accept the board’s minutes.

“My senate is not cooperating with me,” Ho said after the senators failed to approve the Elections Board minutes for the second time.

The Senate’s approval of the minutes, however, is a formality, so Election Board’s decision to disqualify Morales remains legitimate.

The meeting ended just after 5:30 p.m. with more than a quarter of the agenda left unaddressed because another group needed the State Street Room for a meeting.

Isla Vista Party is already off to a great start…