The Daily Nexus
Sports
UCSB Drops Series Against Rival Mustangs
May 20, 2018 at 5:07 am by Andrew Hernandez 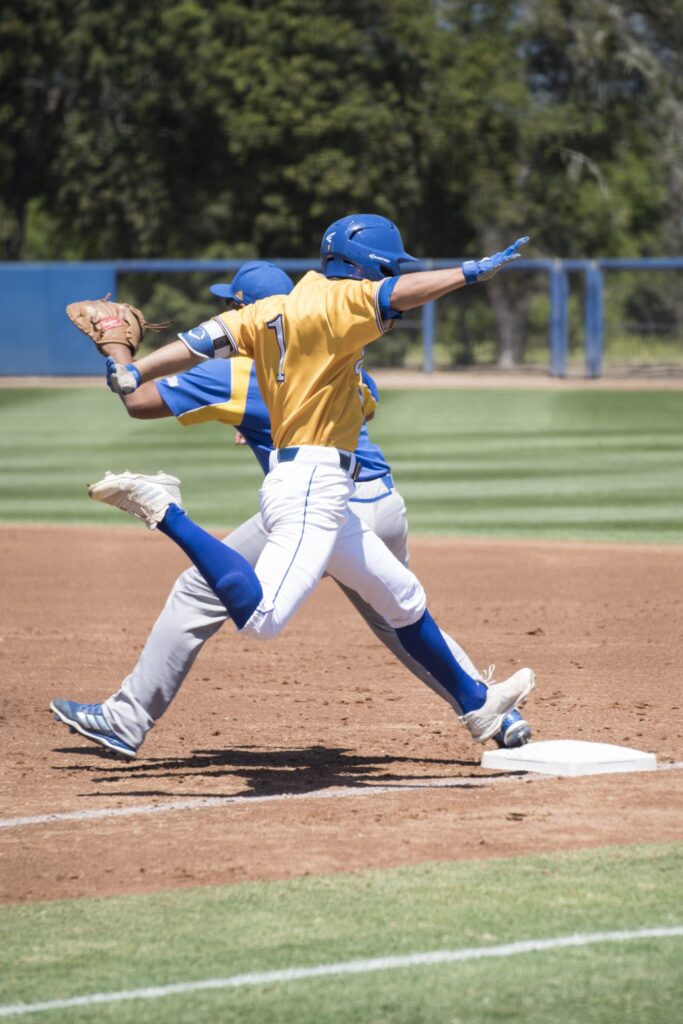 Tommy Jew getting to first base before UCR can strike him out. Siavash Ghadiri/Daily Nexus

The UCSB baseball team gave up a one-run lead behind a pair of clutch Cal Poly Mustang hits in the bottom of the eighth inning, giving UCSB starter Chris Lincoln the loss and the Mustangs the 4-2 victory. The loss dropped the Gauchos to 24-26-1 on the year as they remained in seventh place in the Big West, while Cal Poly was bolstered up to third place in the conference and a 26-27 record.

Freshman right-handed pitcher Joshua Candau came in to relieve for the Gauchos in the bottom of the eighth inning after Lincoln walked the first batter. Candau got the first out on a bunt attempt from sophomore Kyle Marinconz at the cost of the runner on first getting into scoring position.

A fielding error at third base from Jason Willow allowed the subsequent batter Samuelson to get on base and the tying run within 90 feet of the plate. Candau was able to secure the crucial second out on a fly ball hit to left field which was caught.

Junior Nick Meyer approached the plate and hit a bases clearing double to put the Mustangs ahead, 3-2. The pair of RBIs was Meyer’s 26th and 27th of the season and was a clutch drive with his team down a run late in the game.

Meyer crossed the plate a batter later on a single through the left side from sophomore Bradlee Beesley to make the score 4-2 in favor of the Mustangs. Candau was pulled from the game for freshman right-handed pitcher Chris Troye who was able to get out of the inning with no further damage.

Cal Poly reliever Taylor Dollard, who came on midway through the seventh inning, closed out the Gauchos in the top of the ninth, to continue his team’s two game winning streak. The 2.2 inning effort from the freshman earned Dollard his third win of the year.

UCSB sophomore right-handed pitcher Chris Lincoln put in seven innings of work in his start  today, giving up five hits and one earned run. Lincoln was stellar in his outing and was clearly in control as he made his around the Cal Poly lineup.

The performance was a good showing from Lincoln, who suffered his worst start of the season the last time he had taken the mound in a May 12 start against the Long Beach State 49ers where he was pulled after seven earned runs. Despite taking the game past quality start territory, Lincoln was still unable to escape with a win due to the late-inning collapse from the bullpen.

The Gauchos were first to put runs on the board in what was a fairly low-scoring game throughout. Sophomore Tommy Jew smashed his fifth homer of the season off of freshman right handed Cal Poly pitcher Darren Nelson in the bottom of the fourth inning to put the team ahead by one.

The Mustangs quickly answered back an inning later, after a sequence of hits allowed sophomore Scott Ogrin to score. Sophomore Dylan Doherty singled through the left side and into the outfield for his sixteenth RBI of the season to tie up the game at one all.

The sixth inning brought on the third consecutive one with a run scored, as Gaucho freshman Drew Williams lined a double to right center field which would bring junior Clay Fisher home from second.

The run was Fisher’s 32nd and Williams’ fourteenth RBI of the year to put UCSB in the lead, 2-1. The contributions from Fisher and Williams were great to see, but the offense stagnated after taking the lead.

The UCSB Gauchos will play their final game of the series against rival Cal Poly Mustangs at Baggett Stadium on Sunday, May 20 at 1 PM PST.