The weather is finally getting warmer and you know what that means: it’s prime time for ice cream runs! Of course, we can always go to our local grocery store and grab a pint of our favorite McConnell’s ice cream, but with so many trendy ice cream spots, you’ll definitely want to try them all. At Cauldron Ice Cream, they feature a multitude of creative flavor combinations, freeze it with liquid nitrogen, scoop it in the center of a puffle cone and shape the ice cream into a beautiful rose all in a matter of minutes. 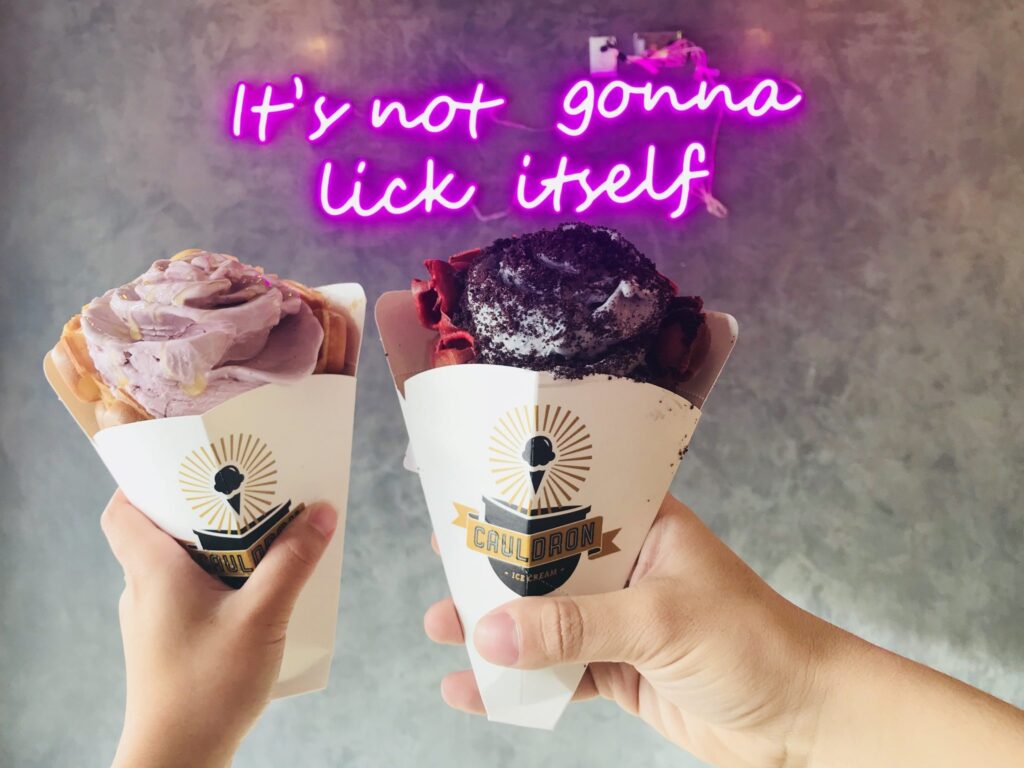 I visited the location in Glendale and the puffle ice cream was the perfect snack to go along with window-shopping at the Galleria and the Americana. When I went inside to order, I was rather overwhelmed by all the different ice cream options they had. This isn’t your average ice cream shop with vanilla, chocolate and strawberry.

I did a little research before heading in and according to their website, they have a new flavor every month. Some of their creative varieties include Earl Grey Lavender, Vietnamese Coffee, Sun Moon & Stars (jasmine, oolong and green tea) and their signature flavor, The Cauldron (vanilla cinnamon with Oreos). Their flavors of the month were Cloverfield, a cereal milk ice cream topped with Lucky Charm marshmallows, and American Pie, apple pie ice cream with graham crackers and apple filling. Once you pick your flavor, you can stop there or take it a step further with a puffle cone, which is a Hong Kong version of a waffle, also known as an egg waffle. You can even choose between original, red velvet and churro for your puffle cone.

I had my heart set on the Sun Moon & Stars, but they ended up not having the flavor for some reason, so I decided to try the Earl Grey Lavender with the original puffle cone. Since it was made with liquid nitrogen, the ice cream itself was super creamy and flavorful. The earl grey flavor was spot-on and the lavender added a nice floral touch that wasn’t too overpowering. It also came with a drizzle of honey and at first, I thought it was going to be too sweet, but all the flavors actually worked well together. I didn’t think the flavored puffle cones would have paired well with the Earl Grey Lavender, so I just went with the original. The combinations of flavors and textures worked really well together, but after maybe half of the cone and ice cream, it was getting difficult to eat. It got a little messy and the portion itself was just really large.

I went with a couple of my friends and one of them got The Cauldron ice cream flavor with the red velvet puffle cone. The vanilla and cinnamon was really tasty, especially with the crushed Oreos on top that gave it more texture contrast than mine. I couldn’t really taste the red velvet too well in the puffle cone, but it was definitely sweeter than the original.

Although Cauldron Ice Cream is famous for its Instagram-worthy puffle cone and rose-shaped ice cream, they are also in the works of new menu items, like their gluten-free ice blended drinks. These frosés are layered beautifully and come in four different flavors that match with their ice creams: The Cauldron, Sun, Moon & Stars, Pineapple Express and Earl Grey Lavender. I haven’t tried these new blends, but they seem like the perfect alternative for those of you who aren’t ice cream fanatics but still want to try out Cauldron Ice Cream’s innovative flavors. If ice cream and blended drinks still sound too sweet for you, they’ve also brewed up a Blue Bantha coffee, which is a Star Wars-themed beverage that’s sure to keep you awake. 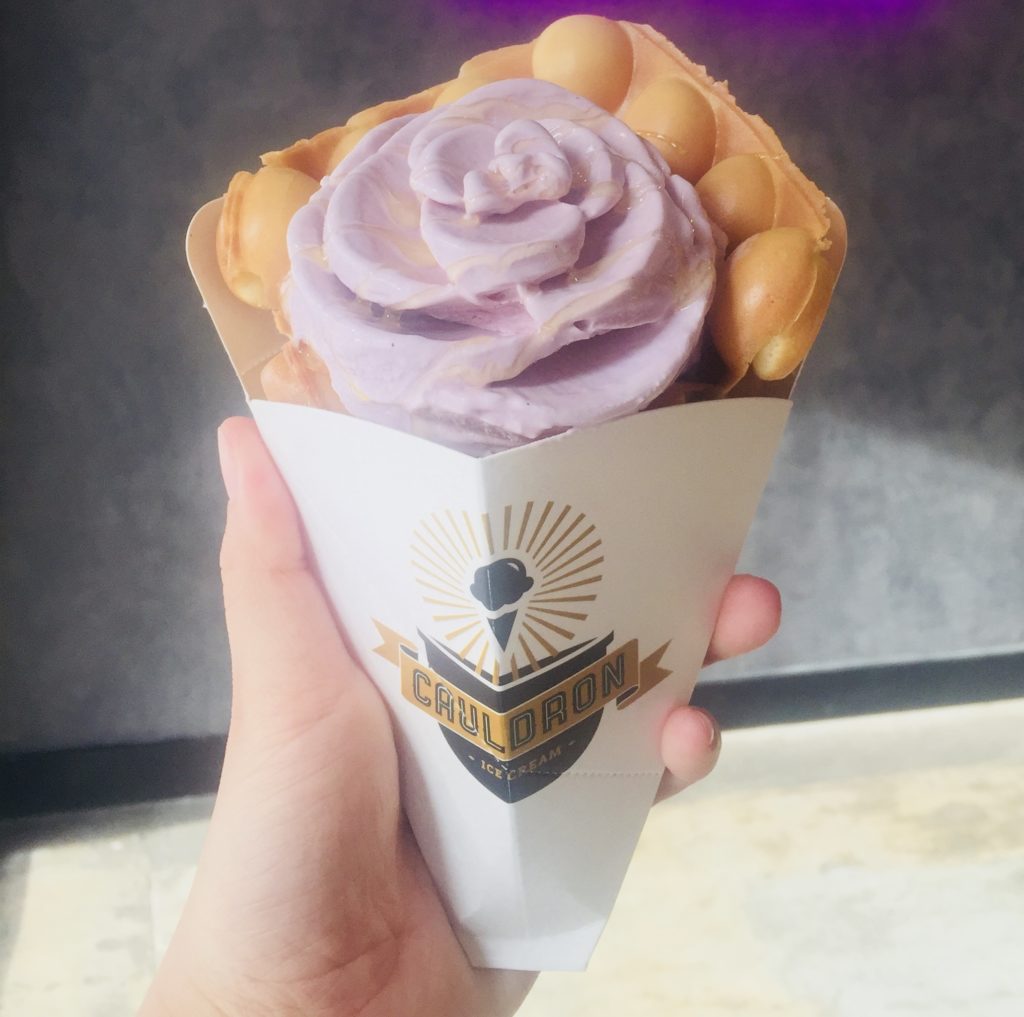 I finished my whole cone and ice cream, but I would definitely recommend sharing it with someone because it really is a mouthful. Also, make sure you don’t get too caught up taking pictures of these Instagram-worthy rose ice cream puffle cones or else you risk getting yourself into a sticky mess. I would really like to go back and try all the other flavors of ice cream as well as puffle cones, but all the Cauldron Ice Cream locations are too far away right now, so hopefully they’ll expand their franchise to Santa Barbara in the near future!