The Daily Nexus
The Daily Stench
UC Releases Additional Statement on AFSCME 3299 Strike
May 9, 2018 at 4:20 am by Trigh Me 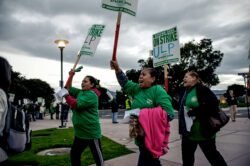 The University of California has released an additional statement in response to the American Federation of State, County & Municipal Employees (AFSCME) Local 3299’s three-day-long strike.

The strike, which began Monday morning, was organized  to protest low wages and has since gained impressive support from students and workers across the UC. It is suspected that the wide attention from local and statewide news outlets and the impact of the systemwide strike is what finally forced a direct response from the UC, as well as this additional clarifying statement.

“We honestly just don’t get it,” the UC stated in their befuddling proclamation. This is specifically in response to the report that collected data from UC employment records, which stated that non-white employees, as well as female employees, were hired into lower-paying titles and given lower average hourly starting pay rates.

The statement went on to read, “So what?”

“I just don’t know why everyone is acting so surprised all of sudden. Did they not know that we’ve been successfully doing this for years?” a UC spokesperson said when asked to elaborate on these newly presented views.

In an effort to stand up to UC and hold it accountable, the workers are demanding what is essentially basic equality for all, regardless of ethnicity or gender. Naturally, the UC delayed its response because it really had to think whether or not this is worthwhile investment. As a public institution that strives to contribute to the education and enlightenment of American society, UC stands by its decision to preach about progression and equality, yet do the exact opposite.

“We put your money where our mouth is,” the statement continued. “That is, we use what should go to workers and students to fund our elaborate, seven course dinner parties. We thought that was obvious.”

The UC went on to express concerns about the future of the institution in regard to the strikes. Hypothetically, if the UC were to give workers the rights and equalities they demand, they fear they may have to start doing the same for all students, as well. Given the success they’ve had at intermittently keeping students mildly content, they fear giving such power to the workers might disrupt their entire balance of systemically employing denial and deflection tactics in relation to such large issues.

The UC has not released any additional, additional statements or clarifications, as they are currently enjoying a leisurely lunch. Updates to follow.

Trigh Me is a student journalist with too much self-esteem and very little patience.

Union is just as racist and corrupt as UC except they don’t pay as good. This is all a ploy so organizers can tax workers harder with dues while they live it up. They have no moral high ground in this.