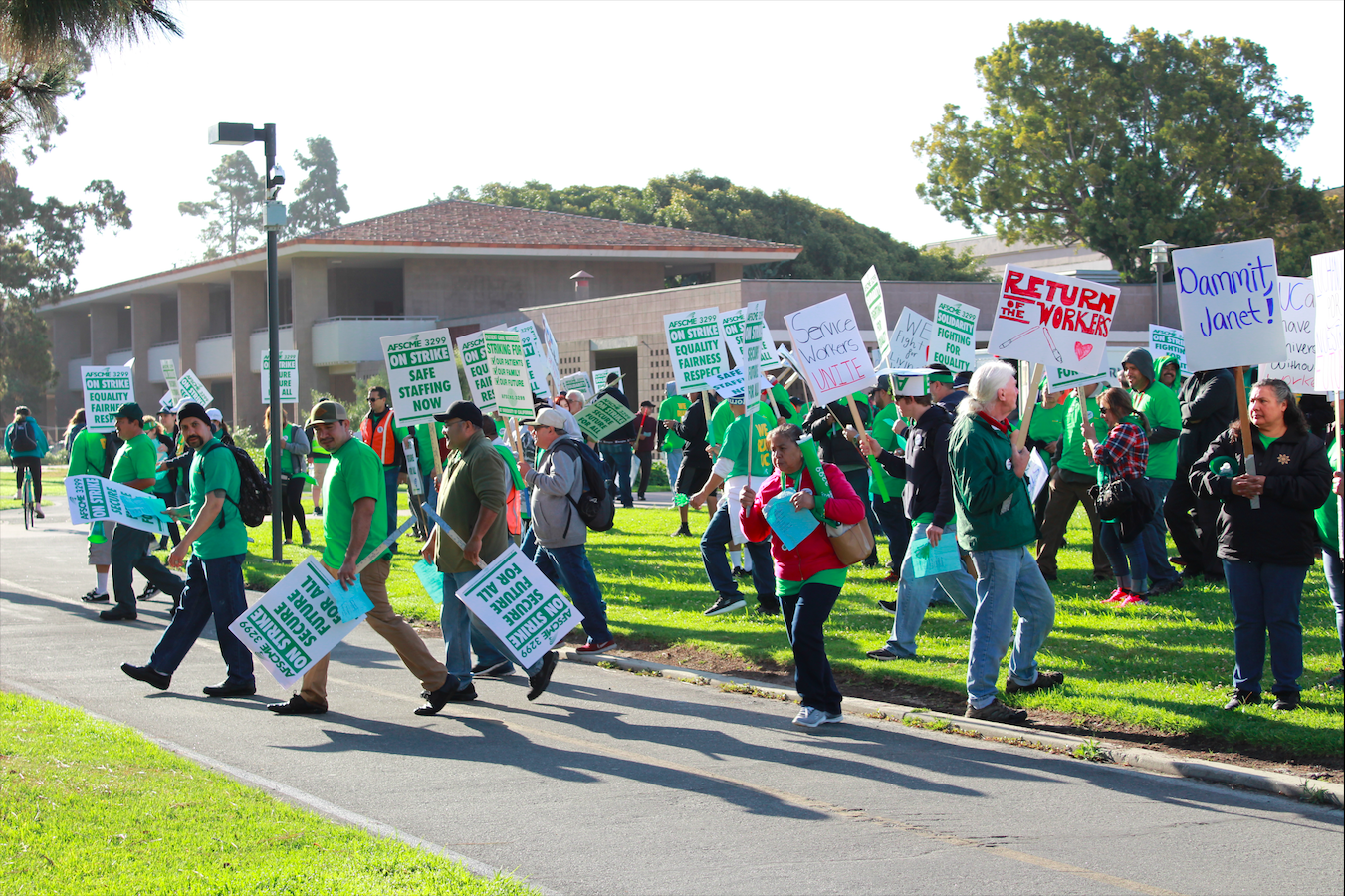 The American Federation of State, County & Municipal Employees (AFSCME) Local 3299 voted to strike in mid-April following a year of “stalled” contract negotiations with the University of California, according to the local union branch’s president, Kathryn Lybarger.

“Administrators are already showing us that we can expect more unequal treatment if we don’t stand up, fight back, and hold UC accountable to its hollow claims of ‘pioneering a better future,’” Lybarger said in a press release.

Workers from all 10 UC campuses plan to strike from May 7 to May 9. Participants on UCSB’s campus will strike from 5 a.m. to 5 p.m. during these days. Volunteers began setting up tents and posters by Storke Lawn around 4 a.m. on Monday morning.

The union held its first rally at Storke Tower at 12 p.m., where workers and students played music and spoke to the crowd about why they were there. 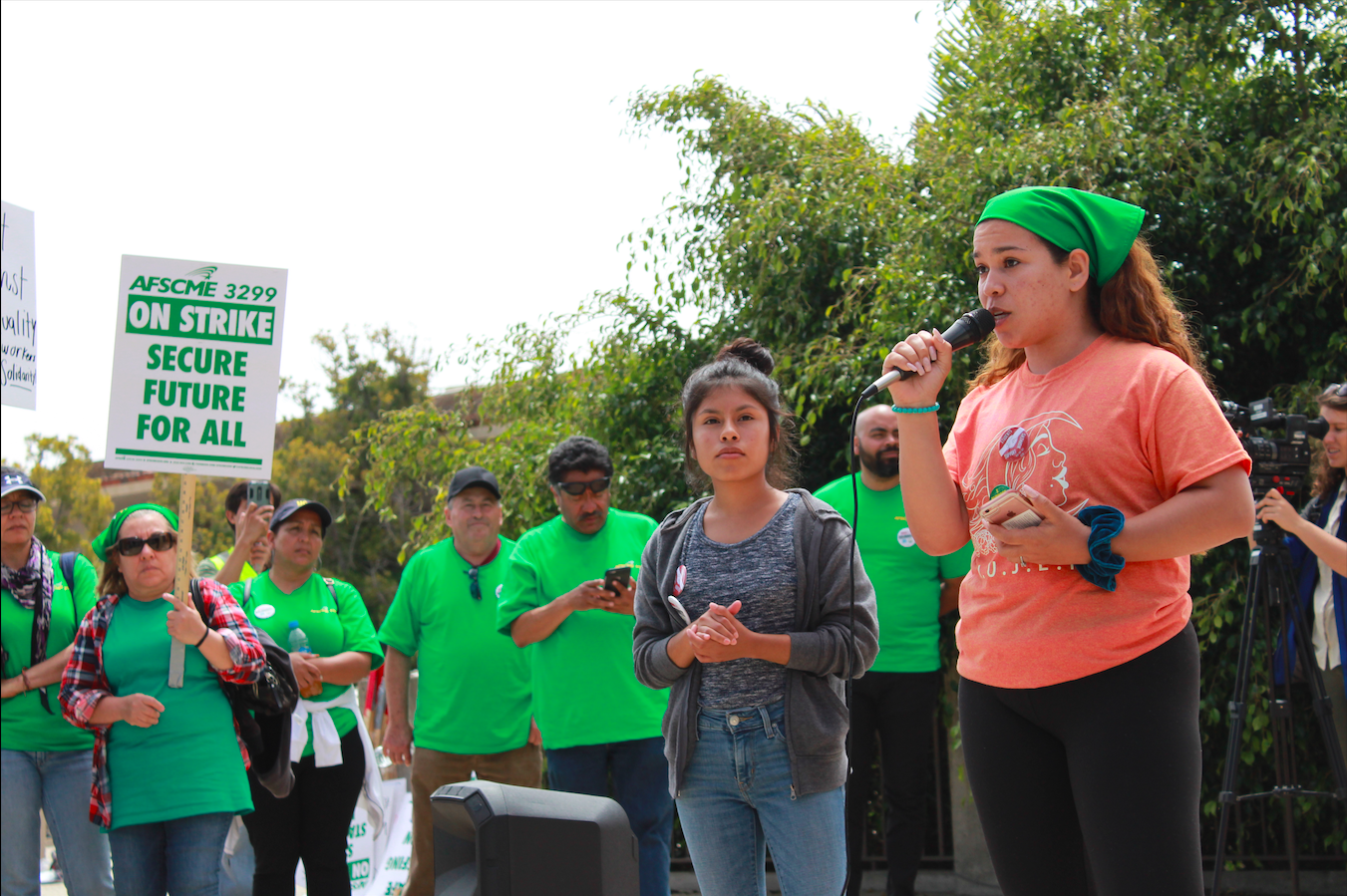 Workers and students spoke to the crowd about why they were there. Vianna Mabanag / Daily Nexus

Workers also marched around the UCSB campus multiple times before the rally, chanting several phrases including “UC, UC, you’re no good, treat your workers like you should!” and “UC, UC, do us right, safe staffing is our fight!”

Individuals carried several signs that read “Stand up to the UC,” “UC Better Have my Money,” and “Respect for Our Workers” among others.

UCSB lead groundskeeper Juan Donato said he is on strike to “reaffirm worker security” and “bring light to UC inequality.”

“This is about race and it’s also about justice and freedom,” he said in an interview with the Nexus. “I work three jobs to provide for my family. This is supposed to be the American dream.”

Dozens of students showed up to support the workers.

“[Workers] have to work 12 hours to scrape by; the UC doesn’t value their time, lives or families,” said Michael Kile, AFSCME intern and fifth-year chemistry major.

A child at the strike holds up a sign in solidarity. #AFSCME3299 pic.twitter.com/Deo26pPFf2

“I think it’s ridiculous that the top one percent of the workers are getting raises while these people are having to fight to make a living wage,” Butson said.

A California trial court “rejected” UC’s attempt to block more than 700 of its workers from going on strike, according to an AFSCME press release. The court said only a small number of critical medical workers are required to report to work during the strike.

The union is “demanding” a 20 percent pay raise over three years, according to a press release sent out by the UC.

UC is instead offering a 12 percent increase over four years.

“The university cannot justify to taxpayers such an excessive raise, no matter how much we appreciate our service workers,” according to the UC press release.

In their press release, the UC said it disagreed with the union’s use of a strike to negotiate a wage increase and said the workers’ actions were damaging to its own union members.

“UC feels that it is highly inappropriate that AFSCME is now using a strike as a negotiating tactic… a strike is only hurting the union’s own members who will lose pay for joining this ill-advised three-day walkout,” the press release said.

Additional coverage of the strike can be viewed here.

If it wasnt for them there would be no UCSB.. Meanwhile billionaire regents cant pay a livable wage! F*ck the Regents, Administration, and complicit/ scab teachers.