In economics, you learn about supply and demand. There’s a certain number of people willing to pay for each price point: many people are willing to buy an apple for $0.03, but few people would buy the same apple for $60. Now that I’ve mansplained supply and demand for you, let’s dive deep into the concept of “Or Better Offer,” otherwise known as OBO.

For coffee tables in search of a new home or sweaters seeking new closets, their sellers are most often trying to conjure a price on a used item and to milk its last drop of value as they pass it on to its next life. For an online exchange and public forum Facebook page like Free & For Sale, it’s perfectly reasonable to take responsibility for the risks you take as a buyer.

For example, sometimes OBO translates directly to “I moonlight as a scam artist on Free & For Sale. How much will you pay me in cash for a broken iClicker?” 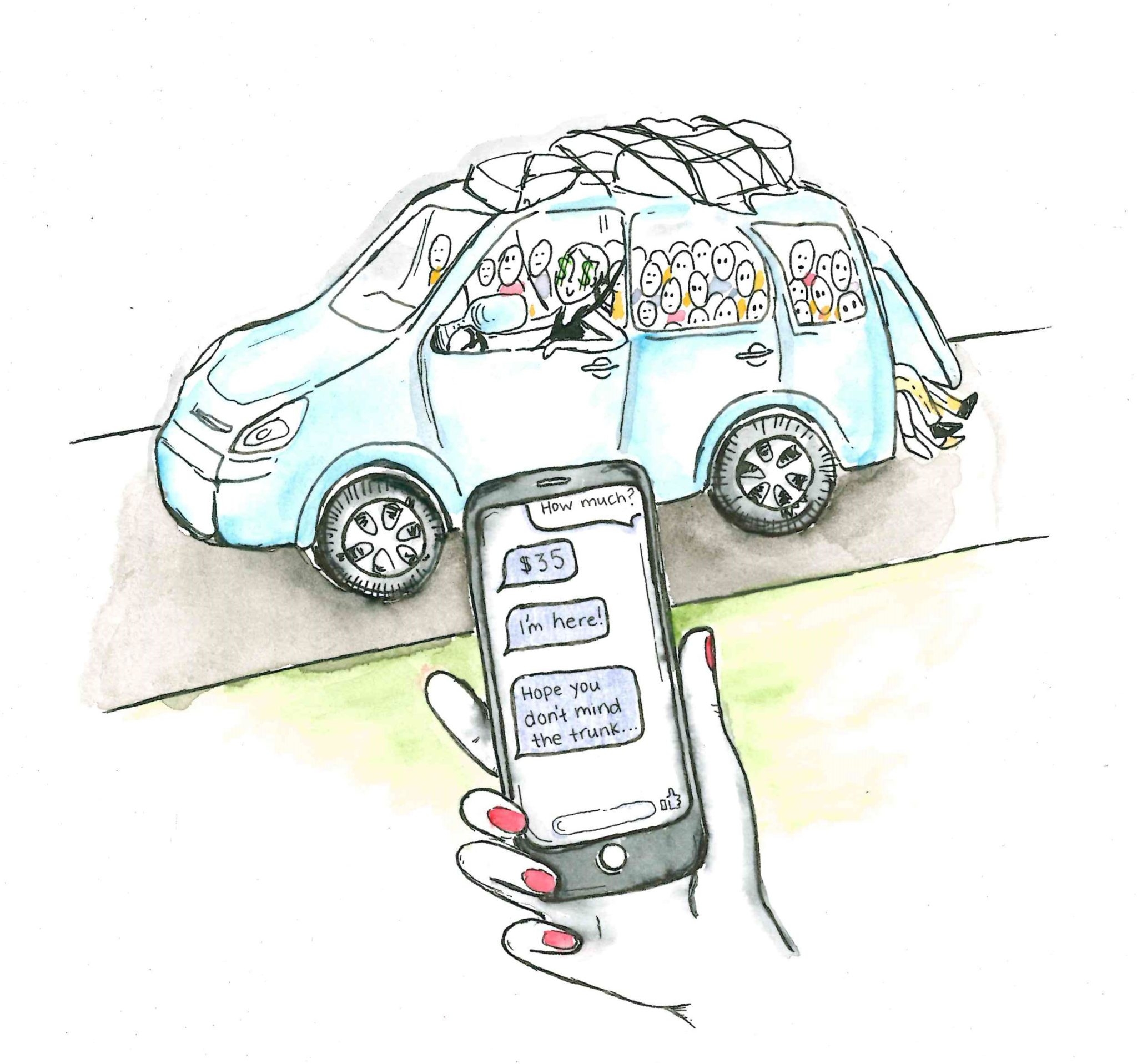 Buyers are forced to risk good quality for low prices if they want to save money buying books, furniture, clothes or various services. The privacy of Facebook Messenger provides an interaction not unlike a silent auction: anonymous bids that push the limit to an object’s worth. A community like ours has a diverse range of socioeconomic brackets and OBO is, theoretically, a wonderful way to engage many potential buyers of varying willingness to pay with an enticing low starting price. In a stroke of serendipity, OBO works brilliantly for the online flea market that is Free & For Sale.

While OBO has proven its practicality for Brandy Melville tube tops and seven-year-old IKEA night stands, it is inherently unethical to surge pricing on Rideshare. To me, Rideshare is about sharing (surprise). It’s a relatively safe way of offering your neighbor a much-appreciated seat, it’s a kind nod to the environment as you switch left to the carpool lane, but most of all, it’s a conscious act of empathy. One could have driven alone and enjoyed a few hours of mindless podcasting, but instead chose the extra hassle of picking up and dropping off people who were on their way to music festivals, long distance relationships or families.

In exchange for a ride, people chip in for gas money (although not always required), light conversation and sometimes snacks. Gas money is a fair expectation for the driver, and I support this system.

On a recent trip home, my roommate came back to report that a trip from Isla Vista to Los Altos could cost up to $35, with some drivers auctioning off the seats to the best offer. It was no longer a first-come, first-serve basis that operated without a discriminatory barrier to entry. Drivers who see the opportunity to make the same type of ticket sales will follow in suit. Some people simply could not afford such a ride with those drivers, and in this particular example of broken capitalism, personal gain again trumps social responsibility.

It is inherently un-Gaucho-like to charge an arm and leg for a ride home out of the Thomas Fire’s pouring ashes, and it is heartless to see this profit over simple acts of kindness.

A Rideshare is not a tank top, it is not a coffee table, it is not a discounted eyelash extension service. It is a helping hand, a generous deed that is returned graciously with a thankful Venmo payment or a couple of crumpled tens. I’ve had pleasant experiences with Rideshare: incredibly kind people who didn’t make me sit in the middle seat, who charged at most $25 and told me about their art project for Art 7A. They take extra precaution to drive without alarming their passengers and either already know the way or have a navigation system in place. Sometimes gum will be offered; occasionally an aux cord will be tossed into your lap.

It is inherently un-Gaucho-like to charge an arm and leg for a ride home out of the Thomas Fire’s pouring ashes, and it is heartless to see this profit over simple acts of kindness.

As my friend Jessica said in a moment of reflection, “Rideshare drivers are the unregulated oligopolists of the Free & For Sale world.”

When a girl picked me up in her seven-seater on my way home to the East Bay, she arranged the seating meticulously. He sits here, she sits there. It finally made sense when the girl who “agreed to sit in the seat without the seatbelt” showed up for her spot in the middle row. We paid $35 one way regardless of drop-off location as she made her way to Sacramento. The driver drove at 90 miles per hour while she navigated from an iPad in the middle console, checked texts and even picked up a phone call with one hand on the way there.

Sure, it was my decision to opt for a five-hour ride in her van instead of a 10-hour journey on Amtrak, but was it fair to ask for gas money when you could not ensure the safety of your passengers? Using GasBuddy, I calculated that her 2002 Chevy Suburban, driving 388 miles from Isla Vista to Sacramento, would cost around $78.44 for 31 gallons. I’m using GasBuddy, which gives idealistically low gas prices, so let’s say that she got unlucky with some gas station on the way, and that it cost her an even Benjamin Franklin. For the seven of us, we were charged $35 each.

Was it ethical for her to ask a grand total of $245? Or am I being an ungrateful bitch? If I wanted to pay for a ride that gave me the thrill of possible imminent death, I would have preferred Six Flags.

When I messaged her to cancel a return ride because of safety concerns (did I mention we knocked over a traffic drum?), she typed for a minute, paused and responded, “I wish you would have told me sooner so I could have filled the spot.”

After my gentle but perhaps ungrateful reminder that we were driving on the 101 and not the Nürburgring, she replied, “By no means will you ever be subject to my driving again.”

Katherine Chen wants Gauchos to help each other without green on their minds.

When you have your own car feel free to schlep people around the state out of the goodness of your heart. Otherwise bite the bullet and sit on Amtrak for ten hours.

Ass, grass, or cash. No one rides for free.

Don’t neglect the wear on her car, the added time on her drive to drop you off (probably over an hour), and the time spent arranging all of the passengers (have you ever tried to get 7 people in one place at a specific time?). There are external costs that your gas calculation doesn’t quite capture.

No excuse for shitty driving though. Should have told her to keep her eyes on the road or give back the money.

You’re not counting for the time it takes her to drop off each person at their locstion before she gets home herself.

if u don’t like the price don’t take the ride. y’all are so annoying.

take the train then damn

What difference does it make what the collective amount of money was the driver got? Would your reaction to the $35 price had been the same if you were the only one in the van?