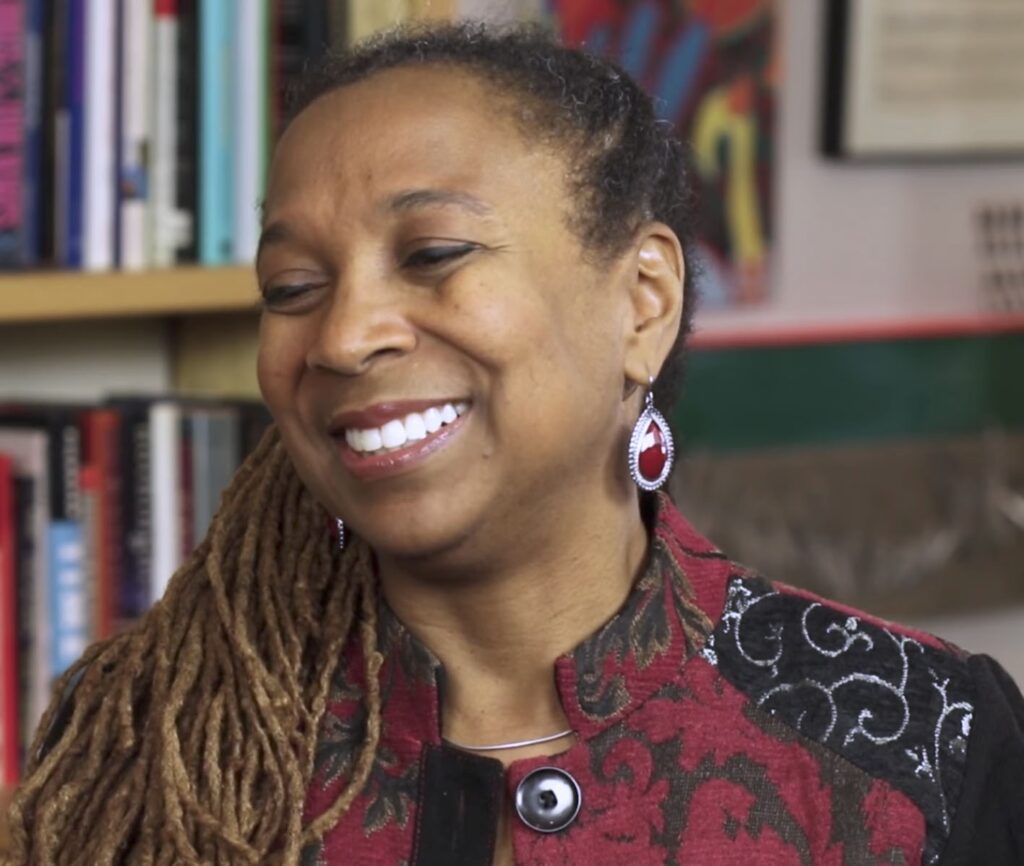 Crenshaw discussed modern movements that have shed light on the role of black women in the U.S. #SayHerName is a movementcreated to bring awareness for black women who have lost their lives to police brutality and still have not been given justice. Courtesy of “The Laura Flanders Show”

Those were some of the opening lines of Malcolm X’s speech at the funeral of Ronald Stokes in 1962.

Last Wednesday, April 25, attendees at Campbell Hall heard the words of Crenshaw, who popularized the concept of “intersectionality” nearly three decades ago. The event was organized by UC Santa Barbara’s MultiCultural Center and Student Affairs.

“Intersectionality is a lens through which you can see where power comes and collides, where it interlocks and intersects. It’s not simply that there’s a race problem here, a gender problem here and a class or LBGTQ problem there. Many times that framework erases what happens to people who are subject to all of these things.”

A well-established scholar of critical race theory and law, Crenshaw spoke in front of a packed Campbell Hall audience.

Rather than simply give a lecture to the audience, Crenshaw used a simulated dialogue between the late Martin Luther King Jr. and her colleague, renowned civil right activist and law expert, Barbara Arnwine.

The imagined conversation gave life to Crenshaw’s intersectionality theory beyond what people have read or written on a page. Crenshaw told the audience the conversation was a reminder that although King strived for social justice, black women were not accounted for enough.

Through Arnwine, she spoke about the way that prominent individuals like King and U.S. President Barack Obama upheld patriarchal beliefs.

Fourth-year sociology major and black studies minor Nisa Smith said Crenshaw’s identity being similar to her own “made everything extra important” because she didn’t just talk about racism in a “one-dimensional” way.

“People tend to only care about liberation as it pertains to them only. I feel like people are not always truly willing to do the work to eradicate their own privilege. Even if you are marginalized in your own way, you are also privileged in some way,” Smith said.

Crenshaw discussed modern movements that have shed light on the role of black women in the U.S. #SayHerName is a movement created to bring awareness for black women who have lost their lives to police brutality and still have not been given justice.

The words have been used in references to the killing of Sandra Bland, but before Bland’s name was even mentioned at Campbell Hall on Wednesday, a segment of Crenshaw’s dialogue asked audience members to hold their hands above their head if they recognized the names of victims of police brutality.

Crenshaw first announced the names of black men such as Michael Brown, Tamir Rice, Trayvon Martin, Eric Garner, Philando Castile and countless others associated with the #BlackLivesMatter movement, in which a majority of the audience’s hands remained up.

However, once she listed the names of black women who are victims – Natasha McKenna, Michelle Cusseaux, India Beaty, Maya Hall and more – many started putting their hands down after the mentioning of just one name.

As all hands in the lecture hall were no longer lifted, Crenshaw left a moment of silence intended to serve as a wakeup call showing the need for intersectionality and why it was created.

Crenshaw’s perspective was not lost on the audience, including Smith, who said women should be given more recognition than they are currently given.

“Black women are experiencing violence on the account of both their race and gender at minimum. These things shouldn’t have to be constantly said. People have to be bullied into giving recognition, attention and respect to black women,” Smith said.

Ingrid Banks, professor of black studies at UCSB, said she often uses Crenshaw’s work in her classes and lauded her influence in activism and academia.

“One of Professor Crenshaw’s most important scholarly contributions is that she brilliantly argues that the limitations of anti-discriminatory theory beg for an intersectional approach in both Black Studies and Feminist Studies,” Banks said in an email.

Banks said Crenshaw’s work is not “arrested” within academia and that her work often transcends into activism.

“Her scholarly work finds legs in the activist efforts she makes on behalf of black girls and women. Both her scholarship and activism bleed intersectionality,” Banks said.