AFSCME 3299, one of the largest unions representing workers within the University of California system, will strike following more than a year of negotiations, according to a union representative. 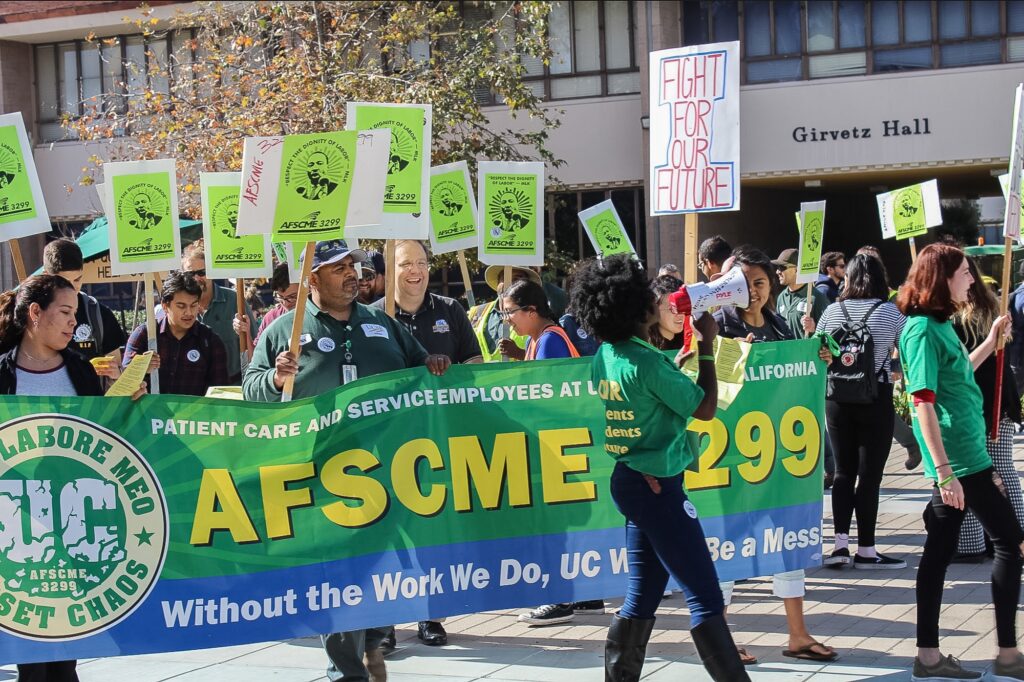 According to a press release from the union, 97 percent of workers within the union voted to “authorize a system-wide strike” in mid-April. Courtesy of Roberto Young

John de Los Angeles, communications director for the American Federation of State, County & Municipal Employees (AFSCME) Local 3299, said the union “exhausted” the bargaining process and the public employee relations board, which oversees labor disputes, declared the situation is “at a final impasse.”

AFSCME’s 9,000 UC Service workers and 15,000 Patient Care Technical workers plan to strike from May 7 to May 9, according to a press release sent out Thursday morning.

“It just doesn’t appear that we’re going to be reaching an agreement any time soon,” de Los Angeles said. “Strike is a measure of last resort.”

AFSCME’s first local chapter within the UC system was created at UC Berkeley in 1948. Today, the union represents approximately 24,000 UC workers, according to the union’s website.

The bargaining team, an elected body chosen to represent the workers, has the sole authority to call for a strike. The union’s bargaining team has met with the UC labor relations team nearly once every month for a year, according to de Los Angeles.

According to a press release from the union, 97 percent of workers within the union voted to “authorize a system-wide strike” in mid-April.

AFSCME conducted the voting over two days at locations across the UC’s 10 campuses, five medical centers and research laboratories among others, according to de Los Angeles.

A small group of UC Santa Barbara students held a protest in front of De La Guerra dining commons on April 16 in support of the workers. AFSCME and other union workers within the UC have also previously held several protests on the UCSB campus, most recently on Feb. 15.

The protests and subsequent vote to strike come following a report analyzing demographics of workers across the UC campuses written and released by AFSCME in early April.

The report stated non-white employees, specifically those in African-American and Latinx communities, are “often hired into lower-paying titles,” while white people are “hired into higher-paying titles.”

The average hourly starting pay rate for a white male patient care worker was $32.53 while for the same job, an African-American female was giving an average starting hourly pay of $24.97, according to the report.

The report also stated UC’s African-American workforce has shrunk by 37 percent since 1996.

The report took data from UC employment records, according to de Los Angeles.

“They’re all coming in [for] starting positions, and women of color are just being paid less,” he said.

The UC has not yet released a public statement in response to the vote or the report, but de Los Angeles said the UC placed conditions in its union contracts “which is why our workers are so upset today.”

“We strongly disagreed with AFSCME’s decision to strike, which will negatively impact patients, students and the UC community,” said Claire Doan, UCOP director of media relations, in an email. “What the union demanded was a 6 percent annual wage increase, which we think is unfair to other UC employees – both represented and non-represented. This is twice what other UC employees have received.”

Doan said that UCOP has decided to increase AFSCME employees’ wages by two percent for the upcoming fiscal year.

“UC presented AFSCME leaders with what we believe to be a competitive final settlement proposal that included multi-year wage increases (3 percent annual for four years) along with excellent health and retirement benefits,” she said. “They chose to reject it without conducting vote among their members.”

The workers’ healthcare premiums will be “brought in line” with the rest of UC’s represented and non-represented employees and the retirement benefits of current employees will remain unchanged while new workers will be offered a choice between a tradition pension or a 401(k)-style plan, according to Doan.

The raises were stalled for more than a year due to “protracted negotiations,” she said.

A version of this article appeared on p.3 of the April 26 print edition of the Daily Nexus.

Update: This article was updated to include information about the union’s upcoming strike.

Update: This article was updated to include a statement from the UC labor relations team.

I worked under a government union associated with AFSCME. Most workers felt entitled to not work and the union protected the worst of them.