The Daily Nexus
On the Menu
Sugar, Spice and Everything Nice at Sprinkles Cupcakes
April 26, 2018 at 12:28 am by Tiffany Velazquez

If you’ve seen “Cupcake Wars,” then you’re probably familiar with Candace Nelson, founder and pastry chef of Sprinkles Cupcakes. The first cupcake bakery, Sprinkles opened in Beverly Hills in 2005 and proved to be an overnight sensation. 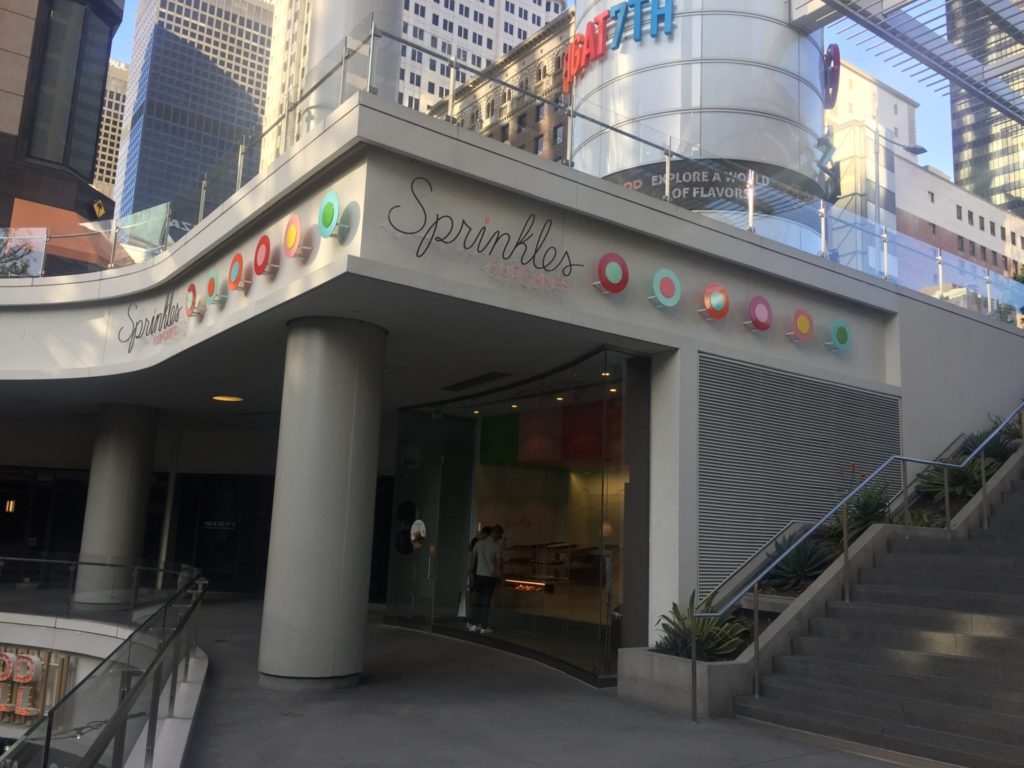 Nelson was inspired by her great grandmother, who was renowned for the distinctive desserts she served at her San Francisco bakery in the 1930s, even considering Sprinkles to be an extension of her legacy. Since its opening, Sprinkles has expanded to 22 locations across nine different states, with plans to bring 34 bakeries to the Middle East. Sprinkles Cupcakes also boasts a traveling Sprinklesmobile and the first cupcake ATM, offering the same freshly handcrafted treats such as their recently launched ice cream that customers can enjoy in store.

During a visit home this weekend, I took a trip to Downtown L.A.’s open-air mall FIGat7th with my mom. Intending to spend the afternoon working on the ridiculous amount of assignments I had for the week, I stopped at Sprinkles Cupcakes to grab myself a little pick-me-up.

Sprinkles Cupcakes is a familiar favorite in my house, surprisingly first introduced to us by way of their pet-friendly pupcakes. Their cupcakes are always perfectly fluffy and sweet, handcrafted and baked fresh daily. Available in both mini and regular sizes, the flavors are rotated weekly to allow customers to try some of their more seasonal favorites. 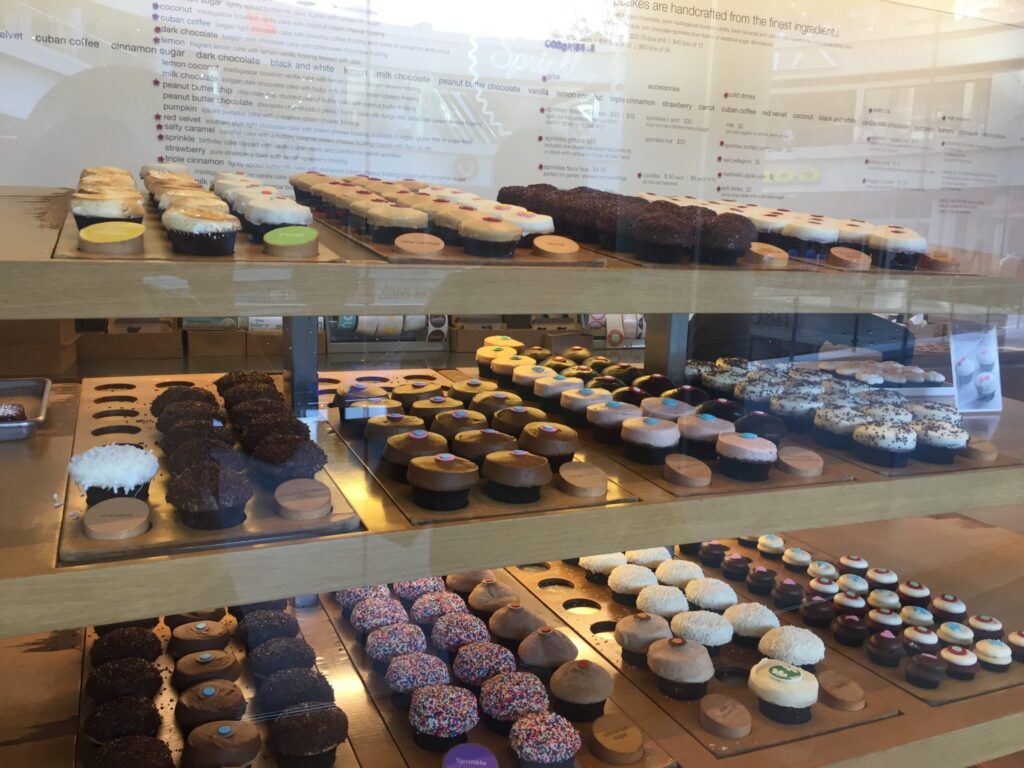 Of course flavors such as vanilla, milk or dark chocolate and strawberry are offered daily, alongside their pupcakes and red velvet. Their red velvet is available in a gluten-free, sugar-free and vegan option. Other flavors offered include:

Not to mention their lemon meringue cupcake, which is being offered from April 16 to 29.

Some of my favorites include their cinnamon sugar and milk chocolate cupcakes, but under the guise of being somewhat healthy and sharing, I opted for their mini sampler. The sampler, offered at five dollars, includes mini versions of their red velvet, vanilla and dark chocolate cupcakes. The three are topped with their trademark dot, star and heart, respectively. Slightly more dense than their regular cupcakes, the three were nonetheless enjoyable, the dark chocolate the clear winner in our eyes and stomachs. 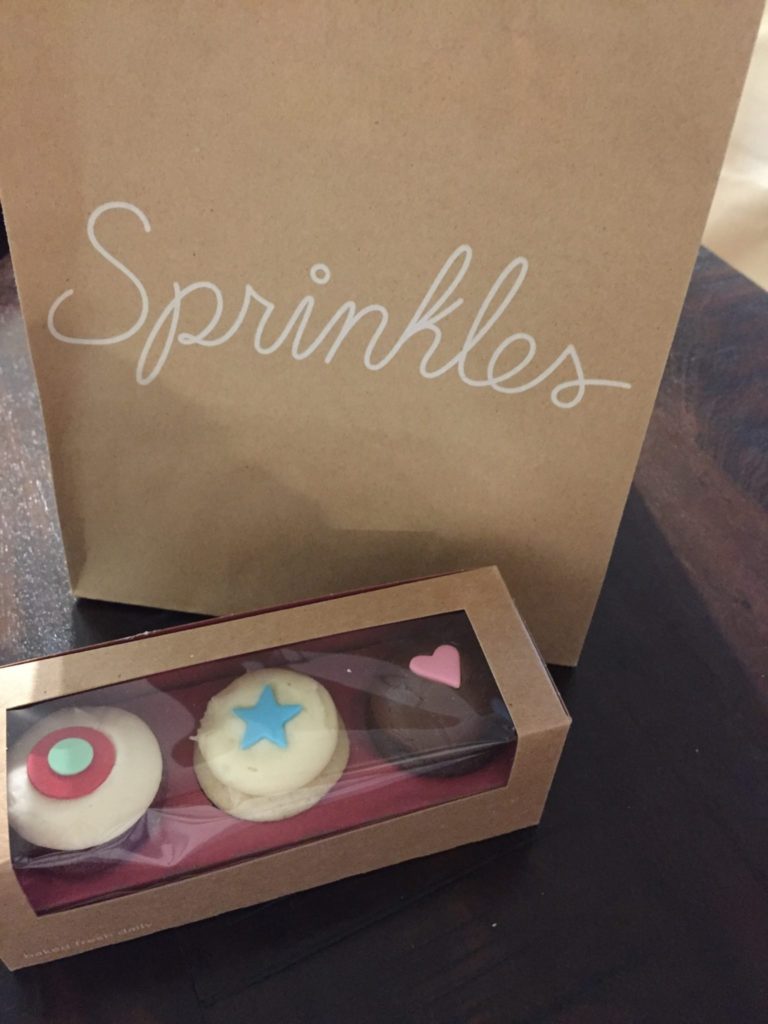 Sprinkles Cupcakes is popular for good reason, their array of flavors marking them as not only the first of its kind, but the best to boot. The next time you stop by L.A., or any one of the twenty other locations, be sure to pop into their shops for a sweet treat. Maybe even design your own or take an assorted box of a dozen cupcakes to go.