The Santa Barbara Metropolitan Transit District (MTD) is proposing service changes to the bus lines 27, 15x, 20, 21x, 7 and 10 that are expected to be implemented in August. 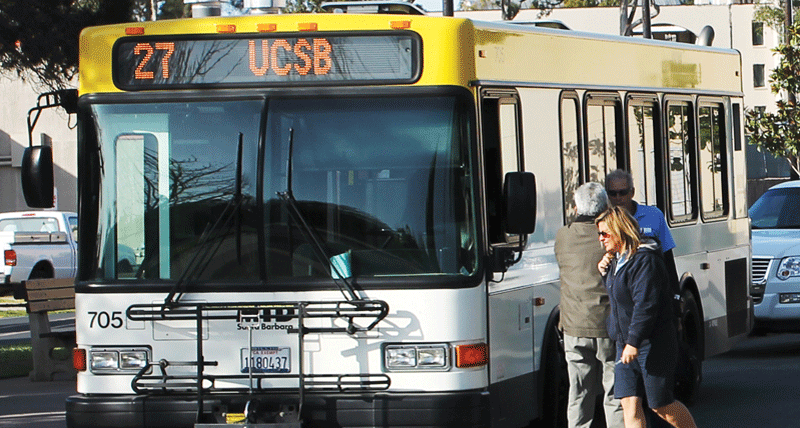 The changes on line 27, the Isla Vista Shuttle, include adding more time to each trip in order to decrease the delays. This would result in the loss of four to five one-way trips per weekday. Nexus File Photo

At an Isla Vista Community Services District (IVCSD) meeting on Tuesday, Hillary Blackerby, MTD marketing and community relations manager, presented the changes to the CSD, the first time the MTD has presented to the I.V. governance board.

Before the creation of the CSD, the MTD held community meetings in various locations in Isla Vista, Goleta and Santa Barbara to propose service changes.

The line will no longer switch directions midday which has previously caused confusion and delay, according to Blackerby. Bus service on Friday between 4:30 and 6:30 p.m. will also be eliminated as there are very few classes at that time.

The changes on line 27, the Isla Vista Shuttle, include adding more time to each trip in order to decrease the delays. This would result in the loss of four to five one-way trips per weekday.

“It takes a while to get through I.V. in a bus because of all the congestion on the street and obviously to get through safely we need to go slow […] When you do something like that [adding time to each trip] it’s not very noticeable,” Blackerby said.

Every April, the MTD informs the communities they serve of the upcoming changes to the bus services, which are then officially put into effect in August of that same year.

A year ago, the MTD proposed new fareboxes that would allow UCSB students to tap their ID cards on the farebox instead of showing a sticker that is given out every quarter.

This new technology has been implemented in a few buses and, according to Blackery, the MTD is “getting close” to fully integrating the new fareboxes.

IVCSD Board Secretary Spencer Brandt brought up the possibility of creating or modifying a bus line that would allow students to access Calle Real/Fairview marketplaces, which includes stores like Trader Joe’s.

According to Google Maps, students can take either the 11 or 24x bus lines toward Goleta and walk 20 to 30 minutes to get to the Calle Real Shopping Center, or take either of those buses and transfer to the number 7, Goleta Old Town, line and walk a few minutes.

Since its start in August 2016, Line 28 has been a “rousing success” to the point where the MTD will eventually require more support from UCSB, according to Blackerby.

Blackerby said that both of these issues are being discussed at MTD.

Blackerby also said that because line 28 buses often get filled to capacity at the El Colegio and Camino Corto stop across Santa Catalina, people looking to get on at different stops along El Colegio are sometimes “out of luck.”

A version of this article appeared on p.3 of the April 26 print edition of the Daily Nexus.