The two candidates running to be next year’s External Vice President for Local Affairs for Associated Students, Sophia Dycaico with Campus United and Jeike Meijer with the Isla Vista Party, delivered their platforms and fielded questions about their qualifications on Thursday. 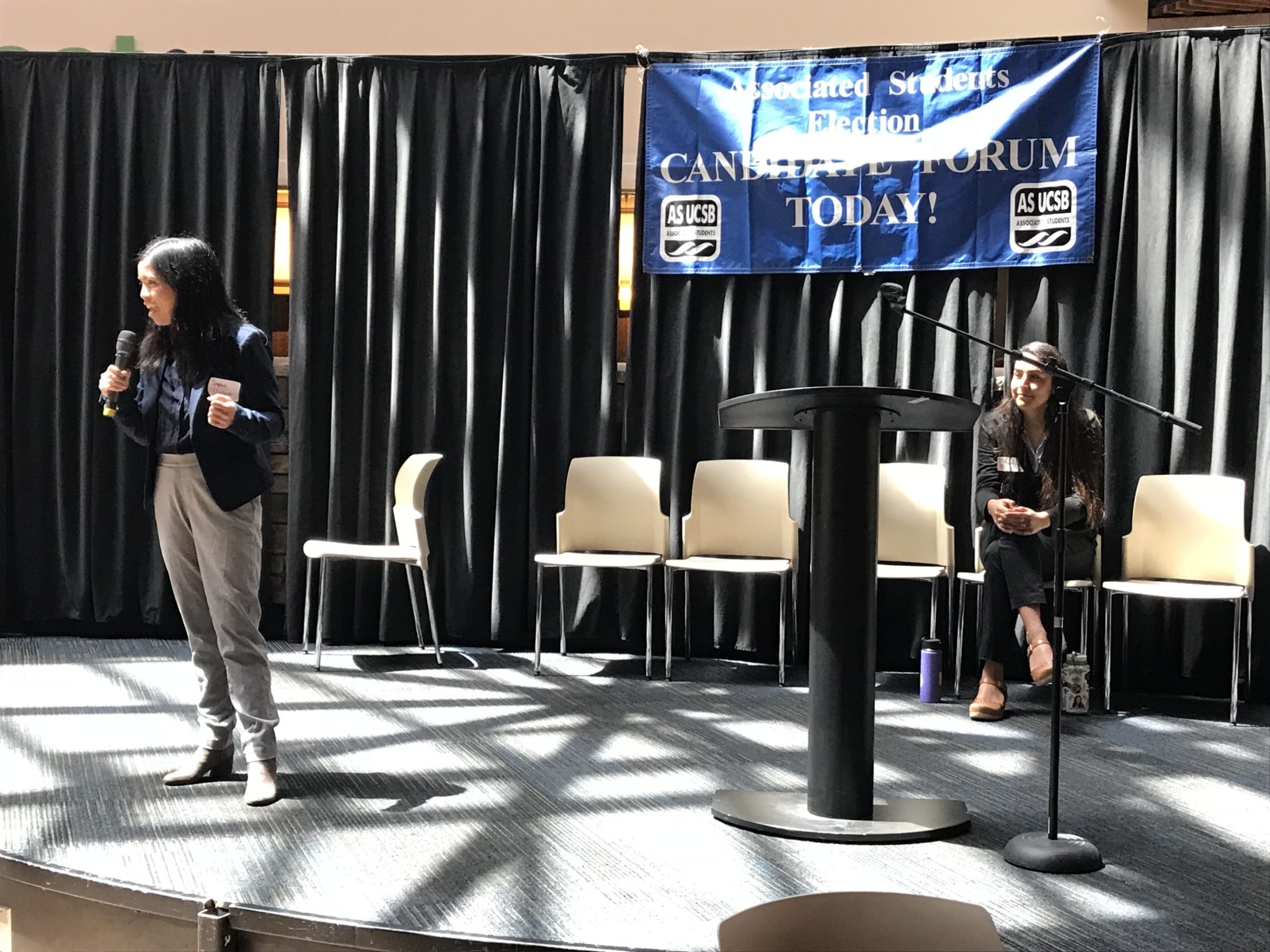 The position of EVPLA represents student interests in Isla Vista and the Santa Barbara community through Associated Students.

Here is a summary of the candidates’ responses to questions posed both by the moderator and submitted by students:

Dycaico wants to work to pass Measure R to ensure there is funding for the Isla Vista Community Services District (CSD) to be able to provide services for its residents and meet their needs. She also wants to create a program for sexual assault awareness training, similar to the one all Greek life members undergo.

Meijer wants to reach out to students in I.V. and on campus to make them aware of what A.S. does and what resources are available to them. She would also like to work with the police in I.V. to mediate student relations and advocate for survivor-oriented sexual assault policies.

Dycaico believes relying on UCIV, a volunteer group that offers assistance to partygoers during weekends, as student liaisons between students and police is the right step. She wants to move toward community policing because she believes the police presence in I.V. makes people uncomfortable.

Meijer wants to hold forums with police officers at least once a quarter to ease relations between students and officers. She also aims to create an environment where students feel comfortable reaching out to police for help.

Dycaico believes Halloween in recent years has seen I.V. become a police state and said most people spend Halloween out of town. She wants to implement different events in I.V. so that students can enjoy Halloween in I.V. without partying.

Meijer wants to work on opening up conversations, citing the CSD’s Deltopia Town Hall as an example of a productive discussion. She also wants to reach out to students who are usually not involved in these spaces and work with the CSD to ensure that student safety is the top priority.

Dycaico cited her experience working as the CSD coordinator for the EVPLA office in which she was the liaison between the campus community and the CSD. She also helped the CSD implement a policy internship for students to give them experience in government.

Meijer spoke about her work canvassing for Measures E and F as well as her experience in Campus Democrats, which allowed her to make connections with Congressman Salud Carbajal as well as Third District Supervisor Joan Hartmann.

Dycaico spoke about her plan to utilize the width of I.V. streets to implement slanted parking on one side and parallel parking on the other, which would open up many more parking spaces.

Meijer wants to maximize the space in I.V. that is already available as well as work with the future A.S. President to make on-campus parking cheaper so commuter students avoid parking in I.V. and taking up spaces for I.V. residents.

dycaico seems pretty delusional. these ideas are so bad and unrealistic. replace police with uciv volunteers? who is going to save students’ lives when they od? who is going to break up fights on dp?