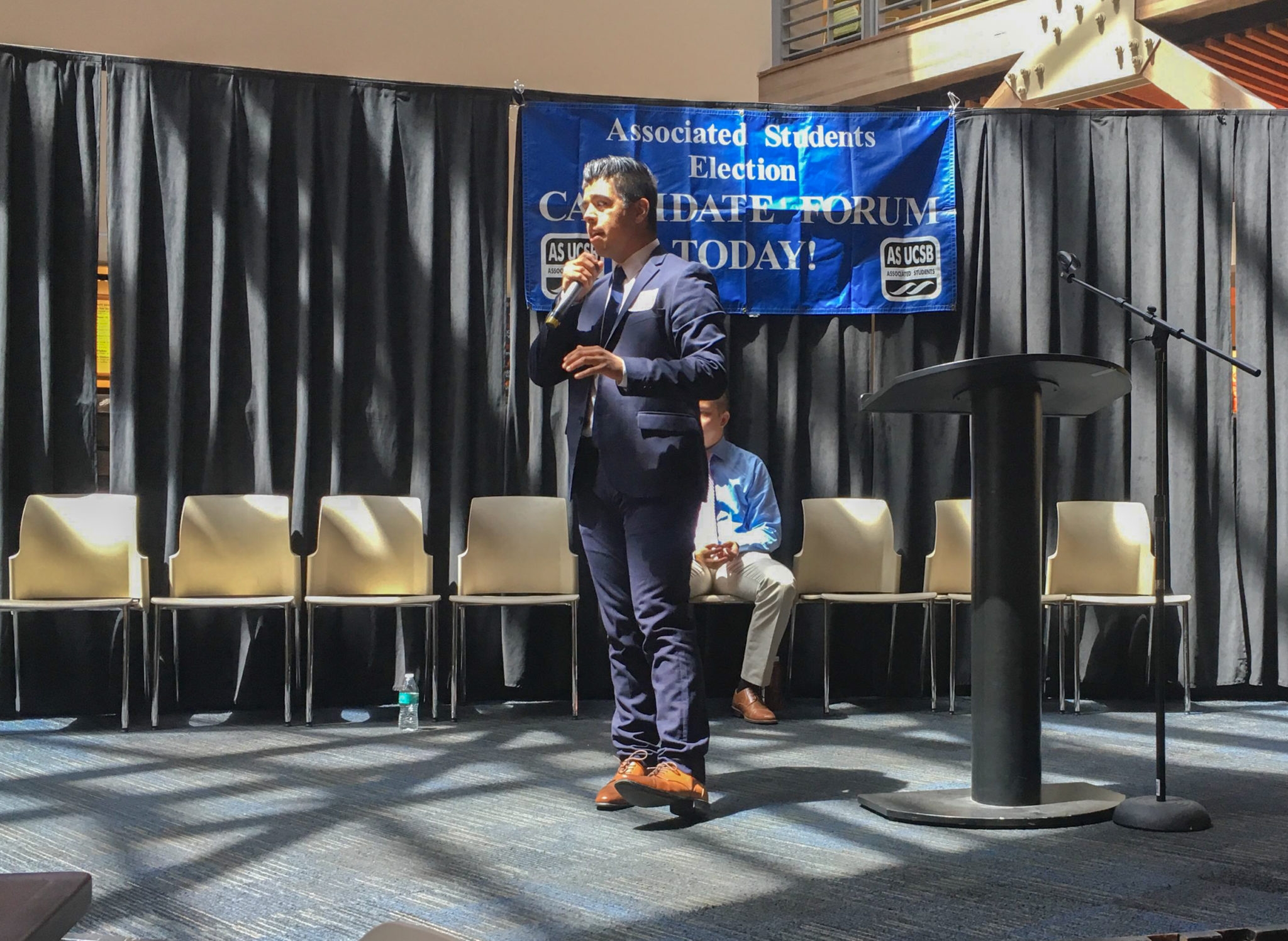 The Internal Vice President is responsible for presiding over Senate and advising the A.S. President on campus issues.

Ho and Pimentel currently serve as on-campus and off-campus senators respectively. As part of their responsibilities as senators, both also work with boards, committees and units (BCUs) and organizations on campus.

Pimentel works with the A.S. Food Bank, Community Affairs Board (C.A.B.) and Human Rights Board (HRB).

Here are the issues addressed during Tuesday’s debate:

Ho believes the largest internal problem in A.S. is a “lack of transparency between BCUs, senators and executives,” referencing the issues of procurement that occurred last fall when many members of Associated Students were not told what was happening.

Pimentel said that the biggest problem in A.S. is accountability. He wants to tackle this by expanding the role of the accountability chairs to “ensure that all senators are being held accountable.”

Pimentel believes that the legal code is the “foundation of the association.” While he believes it is tricky because it’s a fluid document, he says it also serves as a guide for everyone in A.S. and wants to make sure that all senators are aware of how to amend it to meet students’ needs.

Ho cited his experience reading the legal code multiple times, saying that when he was first elected senator, he was the first person to write a bill to change the legal code “before other senators even knew what legal code was.” He believes the institutional knowledge he gained working as a senator will allow him to help fix the legal code, as it is currently “outdated.”

As a co-chair of the Textbook Affordability Committee, Ho said he has “fostered the collaboration of the BCUs, the Student Initiative Recruitment and Retention Committee” to work on getting students involved in the community.

Pimentel is currently a chair for the Mental Health Ad-Hoc Committee and worked on legislation earlier in the year to support students with mental health issues.

Pimentel said the A.S. website should be an essential resource for students because the association is in charge of approximately $13 million of public money.

Ho wants to have the association make their resolutions, bills, agendas and BCU minutes accessible to all students and public on the A.S. website.

Ho spoke about his current experience in Senate, saying that he “knows what it feels like to have senators across the table dehumanize [him] and marginalize [him].” As IVP, he said he wants to make it clear that hate and personal attacks on other senators cannot and will not be tolerated.

Pimentel spoke about wanting to effectively facilitate Senate and wants to ensure that “every single senator feels comfortable in the Flying A Room where Senate meetings take place.”

Pimentel said he believes the current IVP does a great job of keeping Senate organized and bringing people together. However, he wants to make himself more available and encourage one-on-one contact with all senators.

Ho also praised the current IVP’s ability to foster a collaborative environment in Senate, saying he’s been able to work on bills and initiatives across party lines.

Ho recognized it is difficult for female-identifying senators to speak up, but said there are currently an equal number of male and female voices at the table. If elected as IVP, he wants to make sure to constantly remind everyone that every senator at the table has an opinion that should be valued and heard by everyone.

Pimentel talked about how he has witnessed “mansplaining” in the organization numerous times and wants to create a culture of respecting everyone’s opinions.

Pimentel stressed the importance of having “positive, strong relationships” with student leaders and campus organizations as well as the administration in order to get work done. Pimentel personally worked with Marisela Marquez and Housing and Residential Services in his time as a senator and wants to continue to strengthen those relationships.

Ho said he was “heavily involved” in the demands for the RCSGD and the undocumented students’ demands for access to more resources. He said his involvement in these initiatives as well as with Campus Democrats has allowed him to make connections with administrators and student leaders on campus.

Ho said his favorite resolution he authored was one that called for the resignation of the director of the RCSGD because the student staff felt the director was not meeting their needs.

Pimentel’s favorite resolution he authored was a recent one condemning anti-semitism and hate speech on campus.

Pimentel said having the NewCen initiative on the ballot allows students to have the opportunity to vote on the project and have their voices heard.

Ho expressed strong opposition to the fact students would have to pay for the NewCen project. He said students already pay enough tuition as it is and that the university should be responsible for the costs of the renovation.

Ho said that as a senator, he was the first to write and pass a bill during his term. He stressed that his collaboration with BCUs and active presence at their meetings would help him in the position of IVP.

Pimentel addressed his time management skills and work ethic. He talked about holding two jobs besides senator, but said he attended every senate meeting. He also emphasized his interest in speaking to and working with people who have a multitude of different perspectives.

He also say a the N word like left and right

Seems like Anthony just likes to talk about himself and not actual solutions?

Anthony is 100% latino, comes from a low socioeconomic area in the central valley, and his grandparents are from Mexico. Your arguments are invalid lol

You’d be surprised how many racist Latinx/Chicanx folks live in the Central Valley. Also, since he’s not black, he can’t say the n-word. It’s 2018, get with the program.

Yeah this guy yells at students during senate meetings and cusses at them afterwards. Not sure Pimentel is qualified to keep his temper lol

So the party bus last year did not happen?