The Daily Nexus
News
Take Back the Night Rallies Against Sexual Assault, Sets Space for Healing
April 20, 2018 at 8:43 pm by Katie Wolf

Take Back the Night hosted its annual spring rally Wednesday night to raise awareness for the ongoing issue of sexual assault at UC Santa Barbara and Isla Vista. 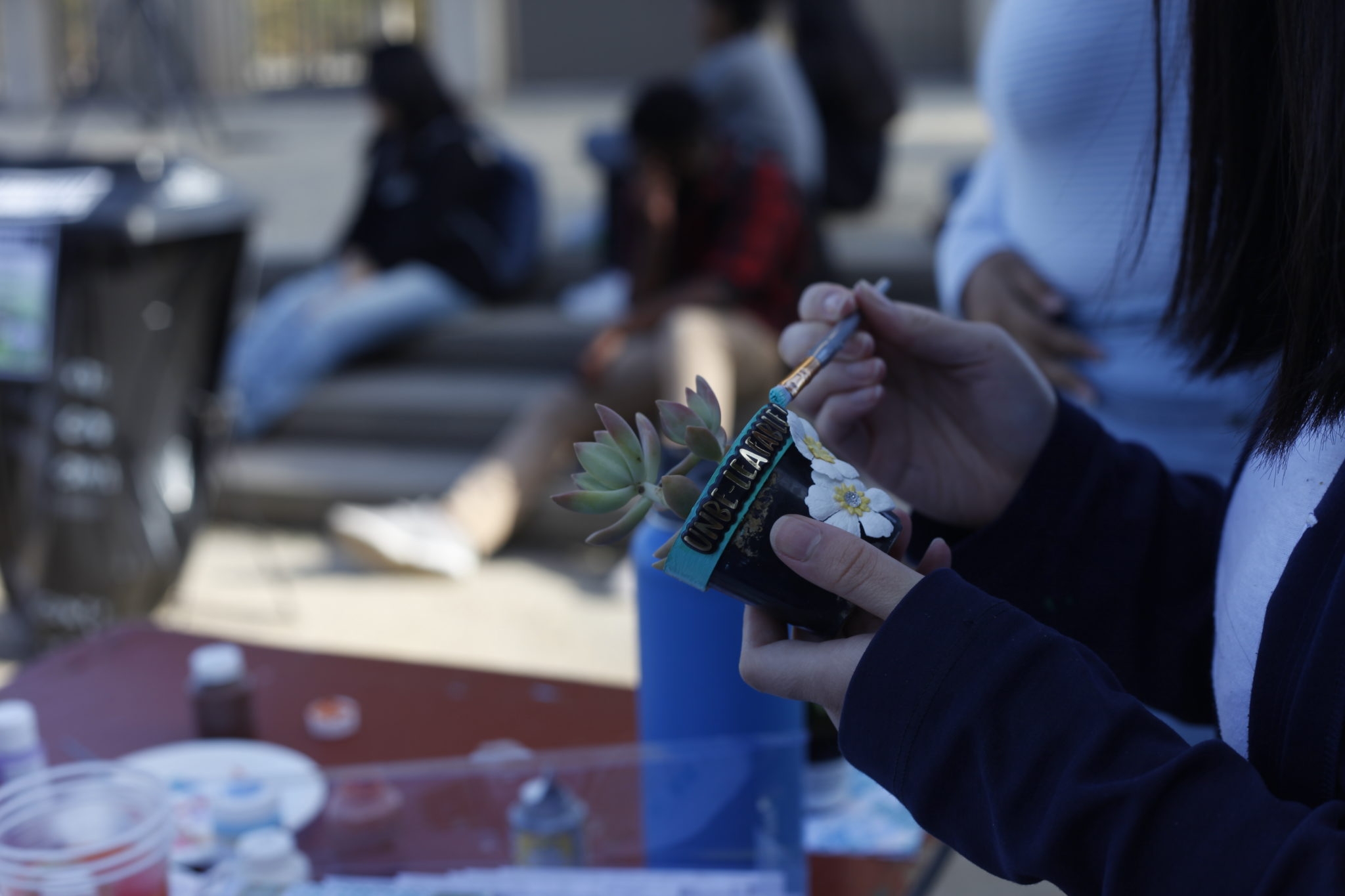 Speakers shared personal experiences of sexual assault with the crowd as students sat on the grass in front of Storke Tower, painting succulents and canvases.

Take Back the Night (TBTN) is “a forum for survivors and allies alike to make their voices heard, [and creates] an environment in which survivors of sexual violence can begin to heal,” according to the organization’s website.

Planned Parenthood, Counseling and Psychological Services and the Santa Barbara Rape Crisis Center set up booths during the rally to give out buttons, coloring books and further information on their respective organizations, offering help to anyone who has experienced sexual assault.

Speaker Kat Alexander, founder and chief executive officer of “Report It Girl,” a web platform aiming to give survivors of sexual assault a platform to speak out, recounted her personal experiences to the crowd.

She described how being a survivor of both rape and incest impacted her life and urged the men and women at the event to be honest with themselves about the tragedies they have endured. 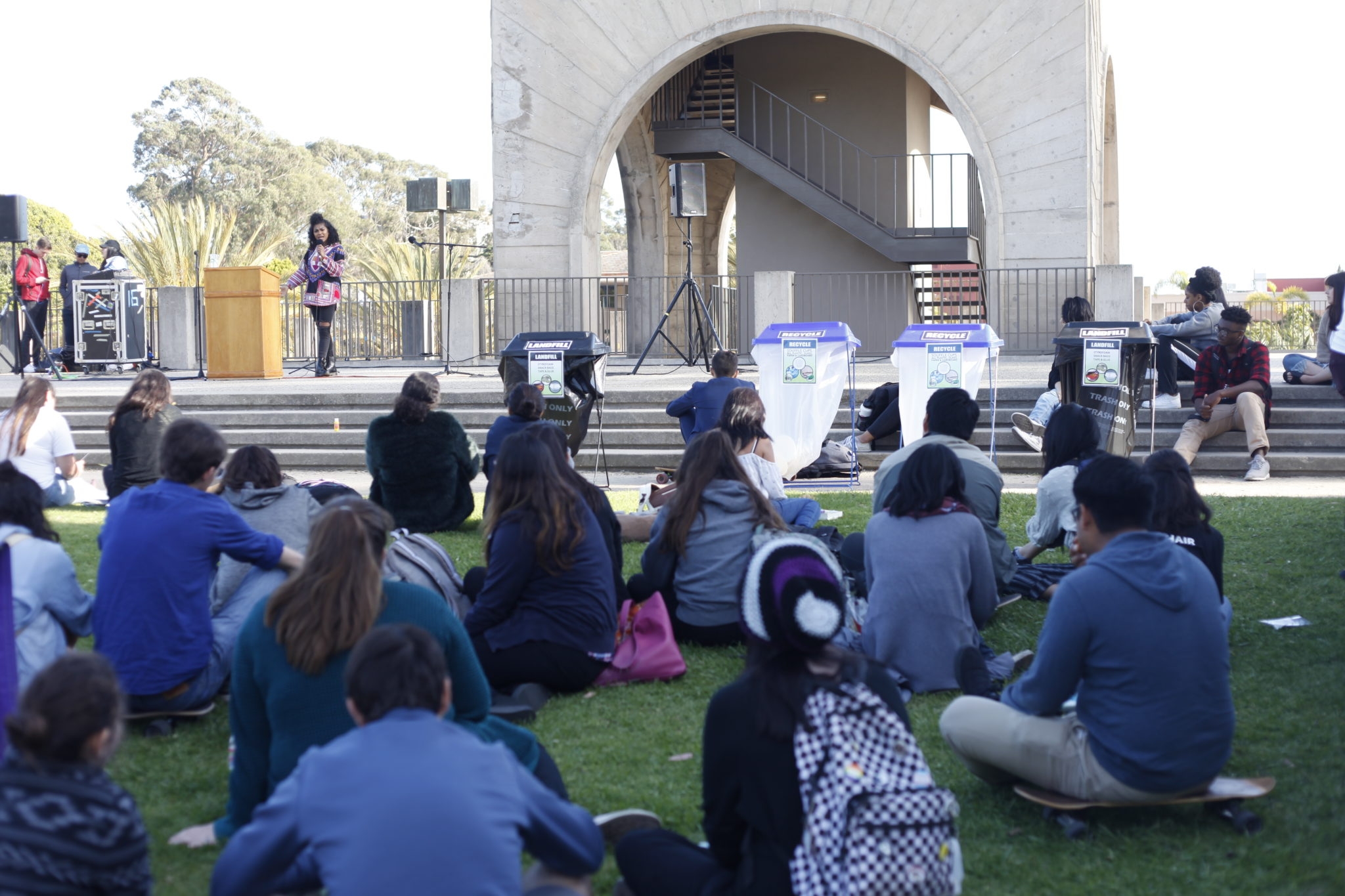 Speakers shared personal experiences of sexual assault with the crowd as students sat on the grass in front of Storke Tower. Lianna Nakashima / Daily Nexus

“Owning our story is a process,” she said.

Alexander spoke about the need for survivors of sexual assault to speak up about what has happened to them and about how surrounding oneself with a community of people is crucial. She explained that approaching traumatic experiences head-on instead of pushing them away is important.

“I wanted to know that there was at least one person out there who had even remotely gone through what I had been through,” she said. “Grief is a totally appropriate response if you have experienced trauma.”

Alexander asked the students listening to get into groups with their friends and share ways in which they were going to decide to address the negative emotions that arise within their own lives.

“I come from an area where [sexual assault] wasn’t talked about,” said Linnea Loeb, second-year biology major. “It’s important to have a presence so people know not only that they’re not alone, but that they have allies.”

“I think it’s really cool to have an organization focused on women empowerment and women acting for women,” said Layla Hernandez, a second-year English major who attended the rally.

In an email this Saturday, Jane Diep, TBTN co-chair, said the organization prefers to emphasize intersectionality and makes efforts to be inclusive of all sexual assault and interpersonal violence, not just women, because “people of all genders experience [sexual assault].”

The organization hung teal and purple bandanas around UCSB’s campus for sexual assault awareness month and in preparation for the event, according to Umana.

“We want this rally to increase awareness and participation to combat rape culture and interpersonal violence. We hope to have individuals inspired and understand what they are fighting for,” Umana said.

In addition to their annual spring rally, TBTN meets weekly to discuss how they can combat rape culture and make UCSB and I.V. safer for women.

Correction: This article previously referred to Loeb as a TBTN member. Diep, a TBTN co-chair, has informed the Nexus that the organization’s executive board does not recognize Loeb as a member. This article now uses “survivor” to refer to people who have been sexually assaulted, where before it used “victim.”