The Daily Nexus
Sports
Gauchos Shine in Doubleheader To Earn Series Win
April 16, 2018 at 12:40 am by Annika Pearson and Andrew Strauss 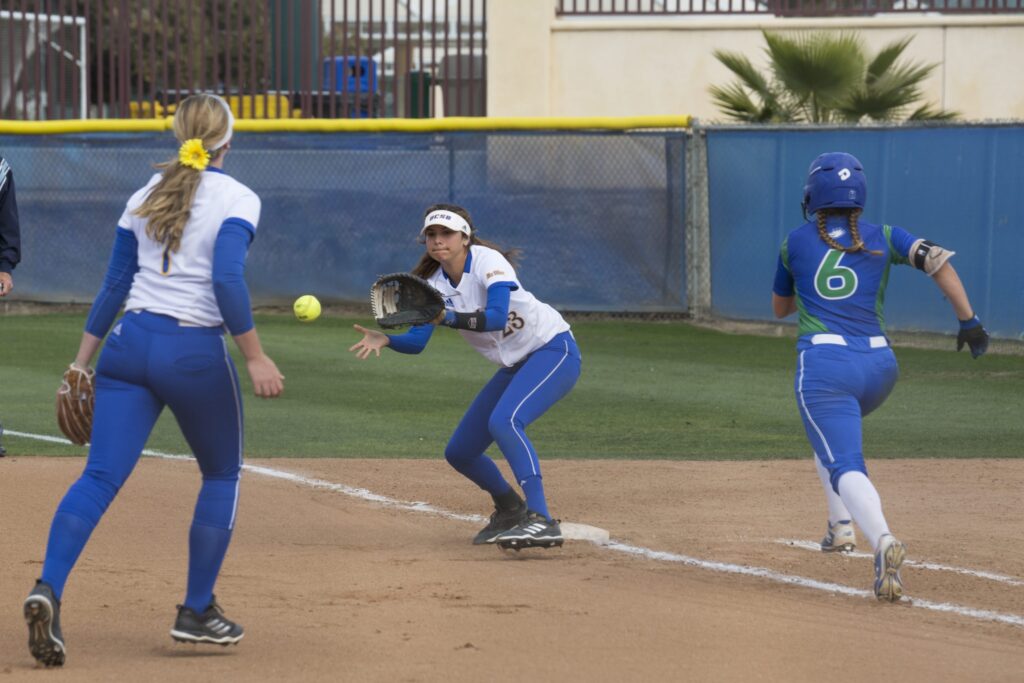 Alyssa Diaz catches the ball to get the runner out. Dustin Harris/Daily Nexus

The UCSB softball team shined just as brightly as the skies of Isla Vista this Saturday, securing two wins in their doubleheader against Hawaii to conclude the weekend series with a win.

The Gauchos pulled off a six-inning 8-0 mercy to start the day and carried their momentum into the second game as they battled the Rainbow Wahine into extra innings, ultimately executing a narrow 6-5 win.

Nonetheless, the Gauchos appear to be on the rise, as they are now competitively sitting much more comfortably amongst their Big West competitors in the five spot.

In what began as a pitchers’ duel in the first inning, the team’s offense successfully broke away from Hawaii early on and showed a much more aggressive side than we have seen lately. Fueled by Hawaii’s defensive shortcomings including a throwing error and a walk in the second inning, the lineup produced two runs with just two hits.

Hawaii’s Callee Heen, however, responded fiercely to her team’s complacency. The junior catcher hit a monstrous home run, her 13th of the 2018 season, driving in two runs to tie the game in the fourth. Compiled on top of a competitive .296 batting average, the power-hitter boasts a 0.543 slugging percentage.

Freshman Sammy Fabian began what became a four-hit rally, singling through the left side. The left fielder has consistently dominated offensively throughout the season and is batting .362, the team’s highest overall batting average.

Diaz, the sophomore first-baseman, has been a standout offensive tool for the Gauchos so far in conference play. Her .464 batting average towers high above the rest as she has had 13 hits in only 28 at-bats.

After going on a four-game dry streak, center fielder Rayna Cohen went 2 for 3 in the game and 3 for 5 in the series. Cohen now has five RBIs in Big West play and can hopefully use this momentum to continue to boost her both her batting average and confidence at the plate.

Challenged once again by Hawaii’s relentless offense, the Gauchos found themselves with a tie-game come the bottom of the seventh and multiple extra innings loomed ahead if the stagnancy continued. Freshman Maci Fines, who flaunts a .393 batting average in the conference, came in clutch with a walk-off single to right center.

Though its offense’s execution at the plate played a vital role in the successful outcome of the series, UCSB’s solid defense cannot go unnoticed.

Let this series be a preview for those to come as the Gauchos’ lack of consistency on the mound has been, for now, halted.

Felisha Noriega appeared in both games. The sophomore pitched a shutout, allowing just two hits, to begin the day as she watched her team mercilessly pile on eight runs against their opponent. Noriega has pitched the most innings of the five-person lineup and has maintained a 4.59 ERA.

Senior Lena Mayer came in as Noriega’s reliever in the second game, shutting down the Hawaii offense in two last crucial innings.

That being said, the Gauchos’ offense will also not be taken for granted in their high scoring blowout. Amidst a total of 11 hits, there were two doubles and a home-run. Over the span of the doubleheader, Santa Barbara impressively totaled 21 hits.

From here, it seems the Gauchos may have finally found their groove. Their success in this doubleheader has revealed their ability to maximize both their offense and defense games, and the team will ideally carry it on into their next series of the Big West conference.

UCSB’s next series will be against Long Beach State at home next weekend.