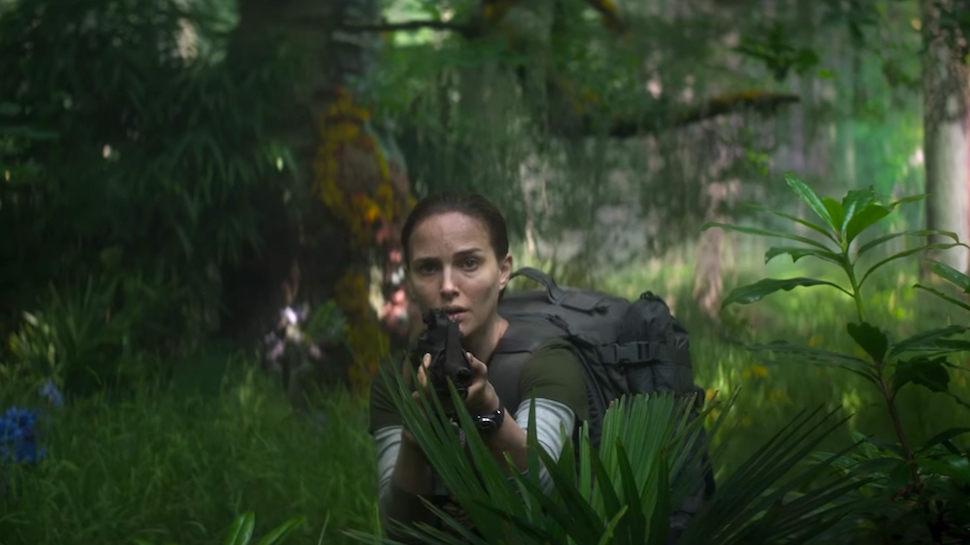 “Annihilation,” Alex Garland’s second writer-director feature, begins with a meteor soaring through space before colliding into the earth. Is this a supernatural occurrence? The end of life as we know it? Before we can wrap our heads around this, the scene ends abruptly. A cell materializes on the screen and begins to divide.

Lest there be any confusion, a voiceover tells us, “This is a cell… one became two. Two became four. Then eight…” and so on.

The opening sequence is a microcosm for the rest of the movie. Based on Jeff VanderMeer’s Southern Reach trilogy, “Annihilation” strives for philosophical sci-fi by being as ambiguous as possible while simultaneously explaining itself to death. While visually stunning and occasionally thrilling, its structure is incoherent and its storytelling is contrived. Garland’s use of the “show, don’t tell” technique is what made “Ex Machina” an outstanding first feature. “Annihilation” tells rather than shows, and that is where it runs into problems.

The disembodied voice from the cell tutorial belongs to Lena (Natalie Portman),  a soldier-turned-biologist and university professor. A hokey conversation with a colleague reveals that her personal life is in shambles. Her husband Kane (Oscar Isaac), who embarked on a top-secret military mission a year prior and never returned, is presumed dead. That afternoon, however, who should walk in but Kane himself. Lena is bewildered and overcome with joy. Kane is equally confused, but seems cold and distant. It becomes clear that he is seriously ill.

On their way to the hospital, Lena and Kane are intercepted by the military. They are taken to a sprawling, remote complex that is home to a government agency tasked with gathering intel about Area X. The Shimmer, as it is also known, is an ever-expanding forcefield that resembles a giant soap bubble. A psychologist named Dr. Ventress (Jennifer Jason Leigh) informs Lena that it was caused by a meteor crash (yeah, that one). She also explains that venturing into the Shimmer is “a suicide mission.” Kane is the only person to ever make it out alive, and now he is dying. Ventress is leading a final expedition, along with a team of specialists: Cass (Tuva Nuvotny), an anthropologist, Josie (Tessa Thompson), a physicist and Anya (Gina Rodriguez), a paramedic. Lena is allowed to tag along for her expertise in biology, which ends up being the only discipline relevant to their mission.

The expedition leads them into a world which defies all laws of nature and science. Everything in the Shimmer is genetically mutated: plants take on humanoid form, animals become grotesque monsters and everything is covered in rainbow-colored fungi. Things start to fall apart as they uncover what happened on the previous mission and undergo grueling physical and psychological experiences.

With such an intriguing premise, “Annihilation” had the potential for greatness. However, the complexity of the set-up is unmatched by its characters. Nothing screams “written and directed by a man” more than flat, one-dimensional female roles. Movies dominated by women, especially female scientists, are few and far between. Here was an opportunity to create empowering, nuanced characters with a star-studded cast, and “Annihilation” completely squandered it.

Part of what makes it difficult to feel emotionally attached to these characters is that we know nothing about them. The script tries to make up for this with heavy-handed dialogue. Midway through their journey, Cass and Lena share a canoe and discuss the dangers of their mission.

Cass says that only messed-up people volunteer to go into the Shimmer: “We’re all damaged goods here.”

She then outlines what makes each woman a “damaged good,” naming every cliche from substance abuse to mental illness. It’s one of many bits that uses cheap, contrived dialogue to quickly dole out information. Twice, Ventress shrieks, “It’s annihilation!” as if to remind us what movie we’re watching.

Despite these flaws, “Annihilation” might be worth seeing, if only for the last 20 minutes. Afterward, I found that I’d crumpled up my ticket in suspense. Garland’s style shines in scenes with limited dialogue, scenes that show instead of tell. A stress-inducing electronic score and mind-blowing effects contribute to the gripping action. At other parts of the movie, some of the special effects felt overdone, making it somewhat hard to buy into the world of the Shimmer. Here, they steal the show.

A key ingredient to any great science-fiction story is likable characters to whom the audience feels emotionally attached. It’s difficult to care about a movie when the fate of its characters seems utterly inconsequential. “Annihilation” is a visual feast and highly suspenseful, even downright scary at times. However, it’s hard to get around the lackluster characters, overworked dialogue and vague conclusion. Ultimately, “Annihilation” is akin to the look in Kane’s eyes after he returns from the Shimmer: empty, meaningless and devoid of feeling.

But…Annihilation was released in February