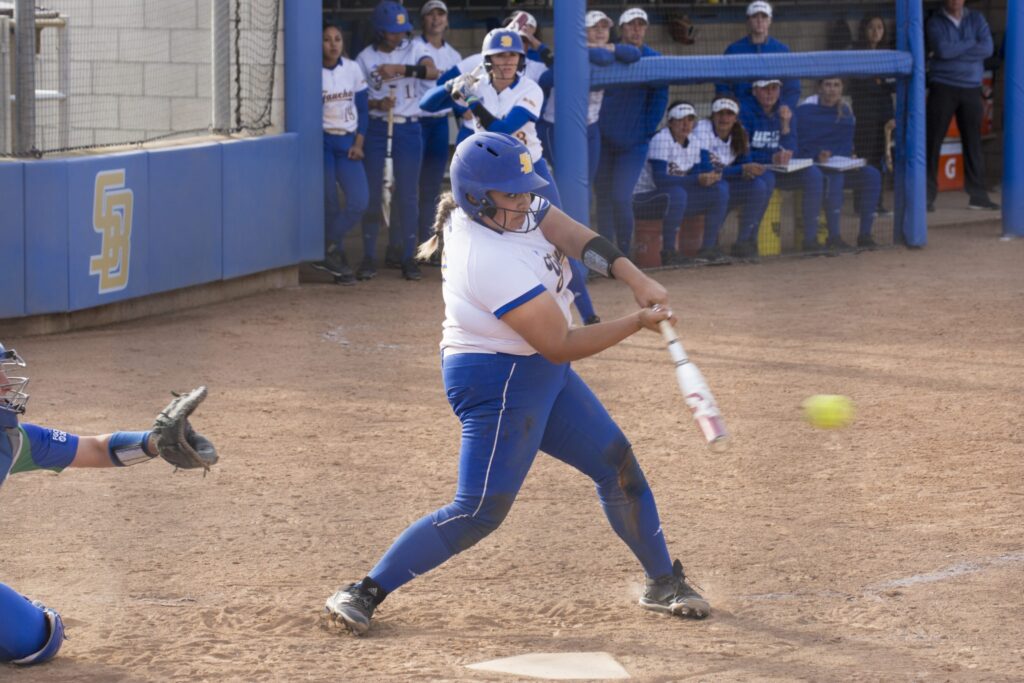 With both teams on the front end of a winning streak, the UCSB softball team welcomes Hawaii to Santa Barbara as it kicks off a six-game home stand.

The Gauchos stand at 15-24 on the season, 2-4 in conference play as they head into their longest home stretch of the season. Hawaii, 19-16 overall, 3-3 in Big West play, prepares for the heart of its conference schedule after sweeping the Cal Poly Mustangs at home last weekend.

The Rainbow Warriors look to maintain momentum through their travels to sunny Santa Barbara as the power hitters out of Hawaii have some confidence brewing from a three-game win streak kept alive by a three-run walk-off homer by senior first baseman Rachel Turner in the bottom of the seventh.

The up-and-down season for Hawaii has consisted of major power from the team’s batting leaders. Sophomore shortstop Callee Heen is on a tear as her second-year campaign has been crucial in keeping the Warriors above .500 on the year.

Heen is slapping a commanding .384 batting average along with an .808 slugging percentage, good for the second best in the conference.

Power hitting is where Heen strives as she sits tied atop the conference in home runs with 12 long balls on the year and fifth in RBIs with 29.

Accompanied by junior third baseman Nicole Lopez who has solidified her three-hole spot in the order, the one-two power hitting tandem has been a puzzle for pitchers the entire year.
Lopez has been a consistent threat, logging the most at bats on the team while hitting .313 in the process.

She sits in fifth place in home runs from Big West Conference players with 7 bombs on the year, managing to add 20 RBIs as well.

Behind Hawaii’s power hitting front end of the lineup is an ace duo of pitching aces commanded by senior pitcher Dana Thompson.

Thompson has started all but thirteen of the Rainbow Wahine games this season sporting a 2.95 ERA and adding four complete game shutouts in doing so.

Thompson has the second most innings pitched in the conference with 133.0 while sitting in the fifth spot in terms of strikeouts at 107.

On the other side, the Gauchos look to continue to keep the bats rolling after their doubleheader sweep over UC Davis last weekend as Hawaii comes into town.

Sophomore second base standout Alyssa Diaz remains a competitor throughout as she carries this Gaucho team with a .349 average, 5 home runs and 19 RBIs.

While there haven’t been many positive takeaways from this season of UCSB softball, production from freshman outfielder Sammy Fabian remains consistent and promising as the first year is putting up premier numbers with a .343 batting average and 9 stolen bases on the year, good for fifth in the conference.

Similarly, UCSB does a terrific job making contact with the ball as it leads the conference in the least number of strikeouts on the season, but the team often struggles to score runs when they get runners on.

The ‘Chos have hit into the most double plays in the conference this season and struggle to get the ball in the air as they also hold the most ground outs.

Similarly, they have the second most fly outs in the conference, so while their contact is prime, the placement of the ball when it jumps off the bat is typically to an unideal area of the field.

UCSB has difficulty scoring runs and it could be in part by the lack of walks hitters get.

The ambitious and active Gaucho bats remain aggressive at the plate, but UCSB only has 84 walks on the season as opposed to some top teams with over 110.

On the other hand, Santa Barbara’s pitching has been atrocious.

The ‘Chos sport the highest ERA in the conference with a 4.46 earned run average and lack the ability to close out games down the stretch.

The two aces heading into the season, junior Veronika Gulvin and senior Lena Mayer, combine for a 4.99 ERA with eight losses a piece.

This weekend marks a big chance for the Gauchos to climb the conference standings before its too late.

The series opener between UCSB and Hawai’i takes place at 3 p.m. on Friday, April 13 at Campus Diamond.