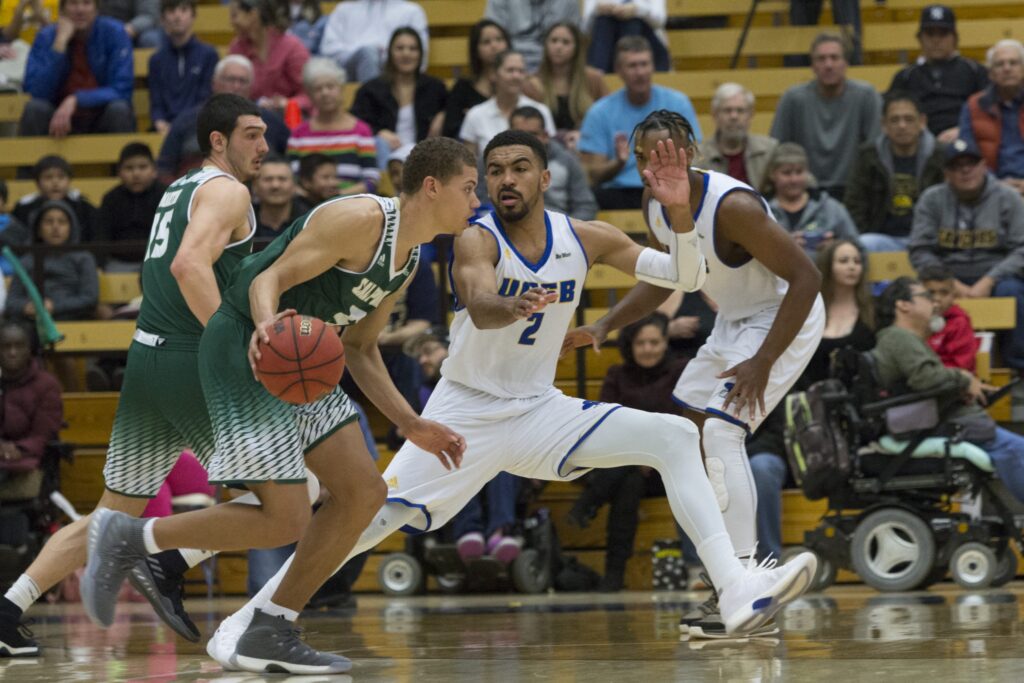 Typically, the storylines in men’s college basketball are about the next one-and-done superstars that look to be on their way to the next level. Although overlooked, the journey of a four-year starter is still alive. It’s usually the case at mid-major Division I schools. It’s a reality we oftentimes witness at UCSB on a yearly basis. While it is common at UCSB, the opportunity to watch a player’s development over the span of four years is a priceless experience. In the case of guard Gabe Vincent, who is preparing for the next chapter in his playing career, the four-year process was nothing short of fulfilling as his name is forever etched in Gaucho history.

SW: Your collegiate career has officially come to an end. Have you had the chance to reflect on your time as a Gaucho?
GV: “I did a little bit [of reflecting] after the loss in the Big West Tournament. I took a week off, but that was more so for my body, so it could recuperate and get prepared for my next step. It’s been a fun ride. I completed some things I didn’t think I would or really had in my sights. Obviously, I had some unfinished business. But all in all, it’s been amazing. Everything I could have ever wanted it to be in many ways.”

SW: Speaking of “unfinished business,” the main focus was to make the NCAA tournament. It was a feat that didn’t happen for you during your career. After going through that, how much of an impact did it have on you? At the same time, how did it influence your mentality to grind for it year in and year out?
GV: “It’s a motivation. It’s a goal for every collegiate basketball player. At least it should be if it isn’t. That’s the ultimate goal every season, day in and day out. Falling short of that year after year makes you work harder in the offseason. It’s the ultimate motivation; not achieving something you wanted and planned to achieve. That journey was rough. Battling back from injury, looking back, it has all helped mold me into who I am today. Not achieving this goal is still going to motivate me everyday moving forward in my professional career as well.”

SW: Just a few weeks ago, you, Leland King II and two other seniors of the Big West (CP’s Victor Joseph and UCR’s Chance Murray) played in college basketball’s first ever three-on-three tournament/national championship (Dos Equis 3×3). Y’all didn’t win the championship, but can you talk about that experience? Was it difficult adjusting to playing with two guys you usually were matched up against? How was it to be able to do something that college athletes aren’t allowed to do as far as making some money?
GV: “That experience was very different. Very different. Even though we were representing the Big West and Santa Barbara in a way, it didn’t feel like it because we were getting paid. It more so felt like ‘this is the first step toward a professional career.’ It was fun being able to play for money with those other guys that you are used to being enemies with. You study their game and film, and know everything they can do left and right. It was definitely nice to play with them and not against them, and get to know them in a different way. Even the game of three-on-three with the rules they had was something that five-on-five doesn’t even expose you to at all. Being able to battle and get to the championship was a great opportunity that went really well for us. Unfortunately, we fell short but we were able to make some money and played well.”

SW: Although your collegiate playing career has concluded, you are already back training and preparing for the next level. How has that process been? What kind of regimen are you on at the moment? Is there anything new or are you sticking to your usual preparation leading up to that moment?
GV: “The preparation is a little bit different in terms of not having games to prepare for right now. It’s more so preparing for workouts and being ready at any time to showcase my talents and to stay in shape. Before, I couldn’t work out as much, especially with my knee. I was worried about my knee and overworking it. But now, with it being close to 100 percent, I’m able to do more. Not having to worry about a game and what not, they can push my limits and see how in-shape I can get and try to get better each day, I’m able to work out more. As of right now, I’m lifting really early, like a 6:30 a.m. lift followed by a hoop workout. I get some food, get another workout in during the day, whether it be an hour or two hours later, just trying to work it in around class [too]. I’m just trying to do as much as possible honestly. Anytime I can hoop, I’m definitely taking advantage of it. Anything I can do to get better.”

SW: Speaking of the next level, is there anything you have lined up in regard to making the transition to the pro ball?
GV: I’m kind of in this limbo of being ready whenever my number may be called and waiting to see what happens in the next few months here. I’ve hired an agent. I’m in the finalizing stages of that. Getting that moving forward and having someone to speak on my behalf soon will be great. I’m just trying to get ready for hopefully any league workouts I can get, and just to be prepared for what comes next in the summer. Right now, I’m just preparing for that next step and trying to set things up. It’s really interesting for me, as someone who is not anticipating to be drafted. Everything is kind of slow for a while, then things start happening really quickly and you get those answers you’re searching for.”

SW: It’s a known fact that UCSB isn’t a sports powerhouse. Given that fact, your journey to playing professionally may possibly be more challenging than expected. Is that potential challenge something you anticipate and will embrace? Does it kind of put a chip on your shoulder?
GV: “A little bit. Coming to this school, I knew that would be something I would have to deal with down the road. I didn’t exactly have the career in many ways that I wanted to. I think coming back this year with my injury kind of held me back numbers wise from the numbers kind of year that I could’ve had. That definitely hurts me moving forward to this spring and summer. But with that being said, at the end of the day, it’s all about who can play and who can perform. I knew that coming into Santa Barbara, and it’s part of the reason I came here because I wanted to go somewhere where I could get better. I think I’ve done that. I’m just trying to get better, and continue to work on my craft and perfect it.”

SW: Have you reached out to any past Gauchos that are currently playing professional ball? Have you sought any type of advice?
GV: “Absolutely. I’ve been close to some guys since I committed to UCSB. I’ve been close with Michael Bryson, who is in the NBA G League right now, James Nunnally, he’s overseas now, Orlando Johnson as well. Those are the three people I’ve been in contact with, and they’ve always been good during my whole four years here. They’ve reached out and checked in on me, and have given advice here and there. They’ve been good resources for me, and a good a part of this Gaucho family.”

SW: If you could talk to the younger Gabe, is there one particular thing you’d like to mention? Any advice or lesson learned that you have now that would be significant enough?
GV: “That’s a tough question for me. I’ve always been a little more mature than my peers around me and a little more professional with how I carry myself. I think I would give advice to trust the process. That everything you do affects the way things are going to be. Everything I do now, every decision I make now, in my mind, I’m making as a pro. If it’s not going to make me better as a pro, then it’s like, ‘why would I go do that?’ Whether it helps my mentality, my body [is important]. I would try to push that mindset on myself at a younger age, which I think I had a little bit of, but obviously as you get older it becomes more serious and you’re closer to being at that level. These are all of the sorts of things I would tell myself in hopes that I would listen as a young kid and take that advice.”

SW: In one word, who is Gabe Vincent?
GV: “Wow. That’s a tough question. I’m going to need a second here.”
“I would say leader.”