The Daily Nexus
Student Gov
Broken, Outdated Pipes to Blame for UCen Smell
April 5, 2018 at 1:16 am by Evelyn Spence 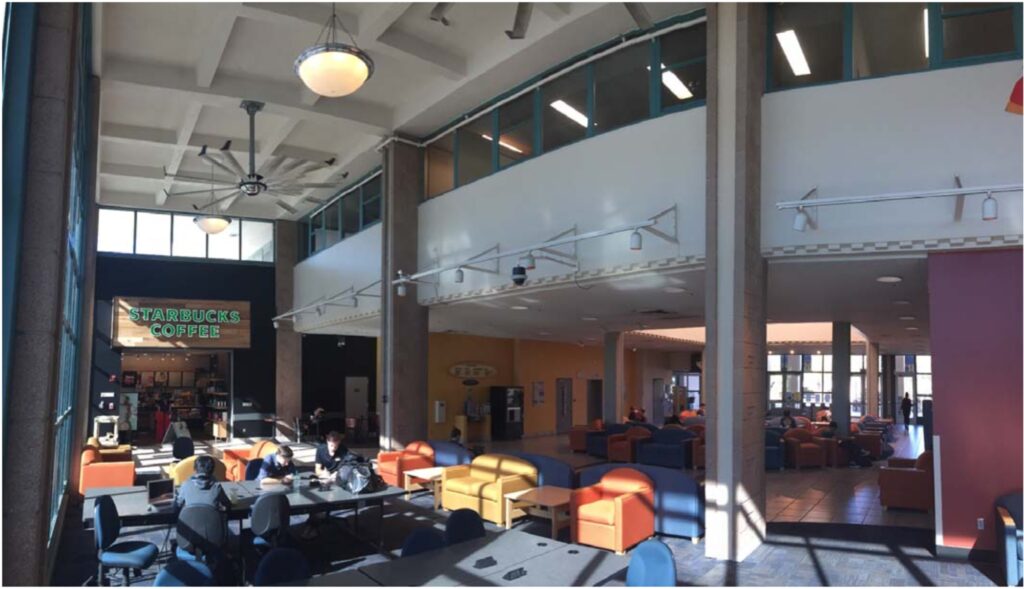 Replacing the piping would cost approximately $115,000, according to the documents. Courtesy of Hieu Le

University Center (Ucen) Governance Board Chair Luke McCrary explained that pipes in the UCen “burst regularly” because they are made of an outdated type of steel no longer used for plumbing.

Improving the UCen will cost approximately $5.5 million dollars, according to documents from UC Santa Barbara Housing, Dining and Auxiliary Enterprises from Jan. 12 this year.

“The UCen is very outdated. There’s a lot of aspects of just the infrastructure alone that haven’t been updated since the building opened in 1966,” McCrary said.

All of the original sewer cast iron lines need to be replaced, specifically in the central kitchen and bathrooms, according to the documents. The original piping was created in 1996 and has received partial repairs, most recently in Sep. 2016 at a cost of $21,000.

Replacing the piping would cost approximately $115,000, according to the documents. 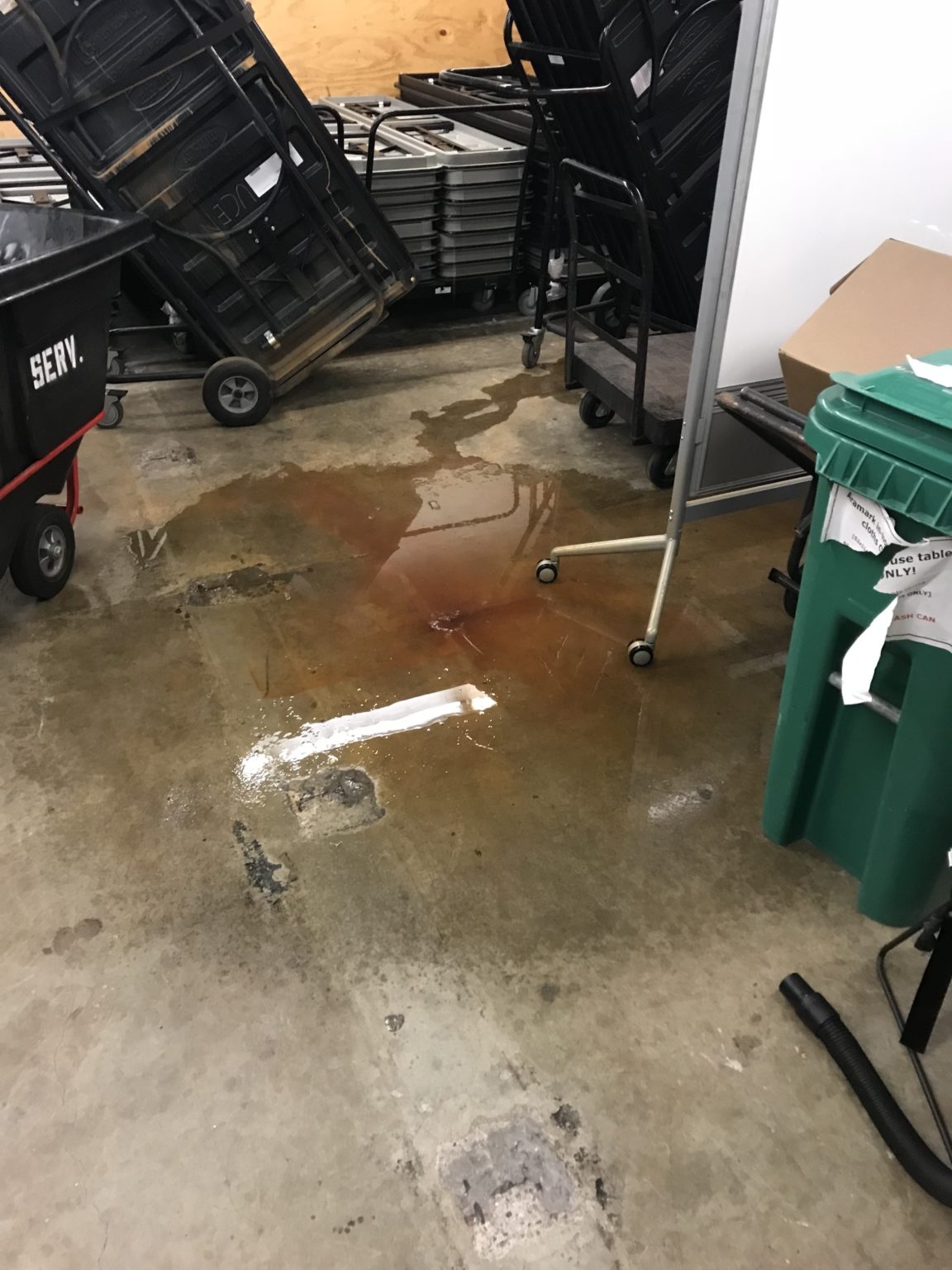 Broken sewer lines flooded a closet in the UCen on Thursday. Courtesy of Luke McCrary

McCrary said the UCen staff has noticed the smell and students have brought it to the governance board’s attention. He explained that there is currently no way to get rid of the smell.

On Thursday morning, McCrary noticed a UCen closet that was filled with water from a broken sewer line.

“If the UCen is rotting from the inside out, it doesn’t make sense to spend money upstairs if everything on the inside is still bursting. It’s more of a safety hazard more than anything as well, but also there’s a lot of leaks in the UCen because of the joints,” he added.

Skylights above the Hub and the Information Desk have “several known leaks” that need to be repaired with new waterproofing, according to documents.

Approximately 54,300 square feet of the existing roof needs to be replaced as well because it is over 25 years old and has “several known leaks.” There is also additional “water intrusion at expansion joints” at Corwin Pavilion and SB Printer.

Part of the roof collapsed on March 21 in the area near the Subway in the UCen, according to Associated Students President Hieu Le. He explained that a student initially contacted him about the issue. 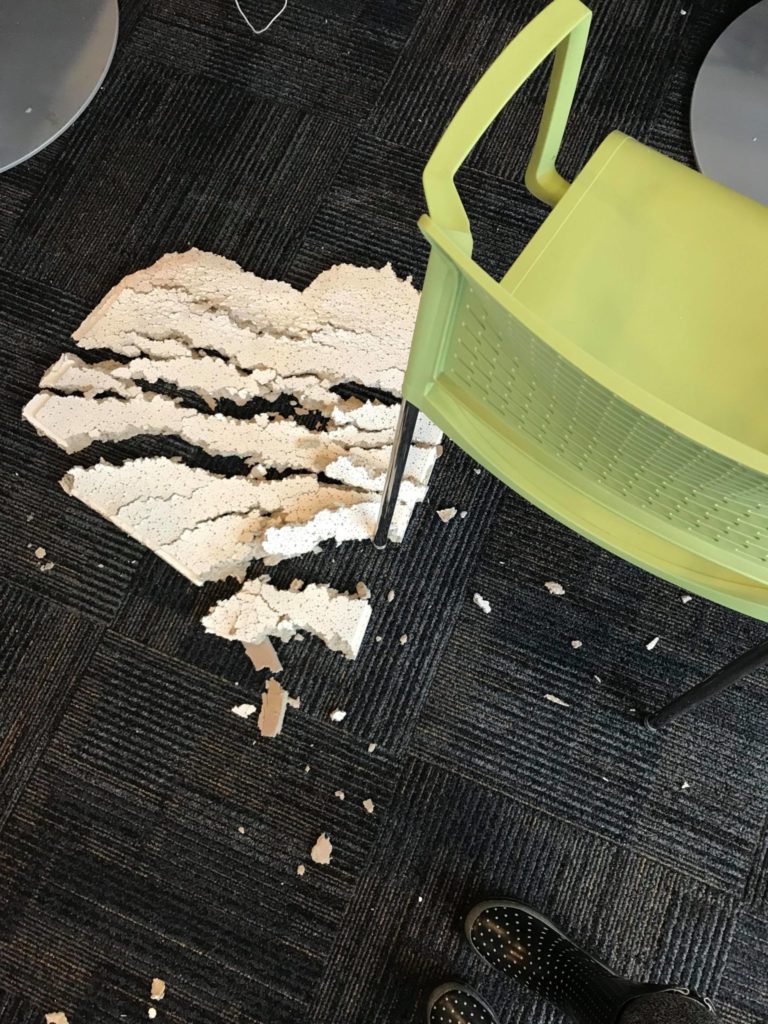 The collapsed piece of the ceiling can be seen in the photo above. Courtesy of Hieu Le

“It hasn’t been updated in over 50 years; we’re using a design and technology that do not meet modern efficiency standards,” Le said.

There is currently no heat or air conditioning in the UCen Lobby or the Hub and the emergency generator circuit capacity needs to be expanded to include all “life safety and operational equipment,” according to the documents.

Approximately $22,500 of this budget would be used to replace toilet partitions, hand dryers and other various bathroom accessories in three of the UCen bathrooms that have not been updated since 1966. These bathrooms need new water supply lines and need to be re-tiled.

New “low-flow” toilets, faucets and fixtures need to be placed in the bathrooms as well, according to the documents.

A total of 21 exterior doors need to be replaced and fitted with new locks. The UCen also needs to replace four of its regular elevators and one freight elevator.

The sprinkler system is functional, but needs to be replaced and it is recommended that exposed sprinkler heads be concealed to prevent vandalism, according to the documents. Some of the UCen’s fire alarm control panels need to be upgraded to a campus standard networked system.

“Those are the most essentially priority needs. We’ve accounted for that in the total priority costs,” Le said.

Money raised by the UCen renovation project would be used to address these repairs, according to Le.

“If this renovation expansion were to not happen, that operation and maintenance fee over a span of 30 years is going to accumulate to $40 to $45 million that’s spent into a current facility right now that is deteriorating and has declining value,” he said.

Currently, students are paying approximately $40 a quarter in student fees to the UCen. If students vote to pass the UCen renovation project at the end of April, student fees will increase by $20.40 until 2022, and to $96.06 until 2052.

These numbers will rise due to inflation, according to documents obtained by the Nexus.

Design fees, internal feels, insurance, escalation and contingency fees are not included in the budget estimate.

A version of this article appeared on p.1 of the April 5 print edition of the Daily Nexus.

Update: This article was updated to include a Thursday morning picture of a sewer leak in a water closet.

Tbh, I would vote to demolish the UCen—there’s no point in renovating a not-so-well thought out building.

All i got from this is that the money we currently pay is being wasted on a building that is dying?

i get so embarrassed when our tour guides lead families/prospective students through our ucen. fix it already