The Daily Nexus
Sports
UCSB Eliminated from Big West Tourney by UCI
March 11, 2018 at 10:57 am by Omar Hernandez 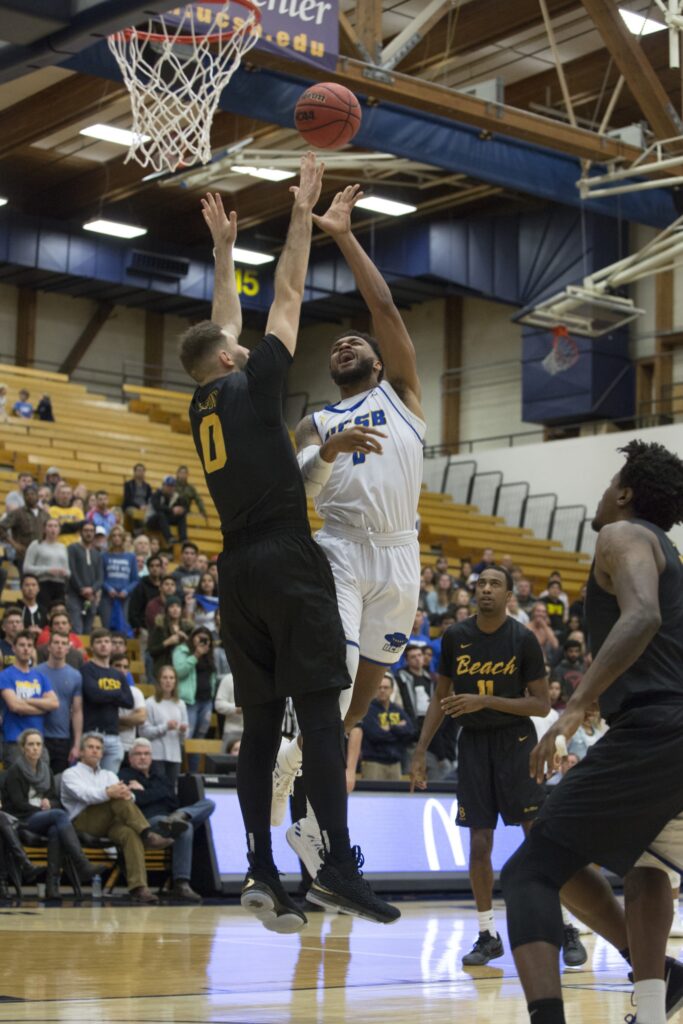 Falling just short of the Big West Tournament championship game, the UCSB Men’s basketball team lost Friday night 61-58 against the UC Irvine Anteaters. The loss in the semi-finals brought the Gauchos incredible turn-around season to an end, however this team certainly established their place in UCSB history. They ultimately finished 23-9 on the year, tying the school record for most wins in a season. Irvine moved up to 18-16 after the victory and are now set to take on Cal State Fullerton in the tournament finale.

The game was back and forth for almost the entirety of the first half, as neither team held a lead larger than five until the Gauchos went on a streak with a couple minutes to go. Sophomore Max Heidegger did most of the heavy lifting on offense for UCSB. The guard scored 15 of his 18 points in the first half en-route to leading both teams in scoring and getting his first All-Tournament First Team selection. While he cooled down in the second half, as the game went on the spacing that his three point shooting created opened lanes in the interior that both Leland King II and Jalen Canty took advantage of.

The Anteater’s only double digit scorer in the first half was guard Max Hazzard, who was one of the best shooters in the conference this season. The sophomore notched 10 points in the half and knocked down back to back buckets with six minutes to go to give Irvine their largest lead of the night, before the Gauchos closed the half on a run to go up 37-35 at halftime.

Both teams struggled to create offense throughout the second half, but again the Gauchos built up a little cushion early on. Senior Jalen Canty was a force in the paint for UCSB, he officially got 3 blocks in the half but changed countless more shots. He also pulled down six rebounds, establishing his presence inside on both side of the court. The center succumbed to the same problem as the rest of the starters later on however, which was not knocking down makeable shots.

No Gaucho shot over 33% in the second half, and while Irvine did play great defense a lot of the misses were open.  Because of a lack of consistency on offense for the Gauchos, the Anteaters were able to hang around even with shooting problems of their own.

“We got some pretty good looks. Sometimes shots don’t fall. That’s just how basketball works sometimes. It happens, but we competed,” Forward Leland King pointed out postgame. “That’s all you can care about and worry about because offense is gonna be there sometimes and sometimes it’s not.”

When the offense isn’t there it becomes that much more important for the team to make it up in rebounds and second chance opportunities, both areas that the Gauchos couldn’t succeed at. In the second half Irvine out-rebounded UCSB by 4, and won the overall battle 40-38. One of the most worrying statistics was the fact that the Gaucho bench was outscored 31-1 in the game. Because four of five starters aren’t returning next year, it’s going to be vital for some of the younger players to gain confidence going into next season.

Even with all the shooting struggles, the game came down to the final few possessions. After Heidegger went one for one from the line with 2 minutes to go, sophomore guard Essayu Worku came down to the other end and hit a jumper to put the Anteaters up 61-58 with 45 seconds to go. Senior Gabe Vincent couldn’t knock down a three-pointer on the left wing in the next possession, and the Gauchos opted not to foul Irvine on defense. This actually gave UCSB the last shot of the game which was a desperation heave by guard Marcus Jackson that clanked off the rim.

This certainly was a disappointing loss for one of the best basketball teams in school history. The Gauchos were looking at a potential 14 seed in the NCAA tournament if they had gone all the way, and it could have been a storybook ending for the veteran squad. Instead they won’t be in the Big Dance, but that shouldn’t take away form the amazing year that this team had. While they couldn’t make it to March Madness, this team brought new life to the Thunderdome and UCSB in general, and they’ll always have that.