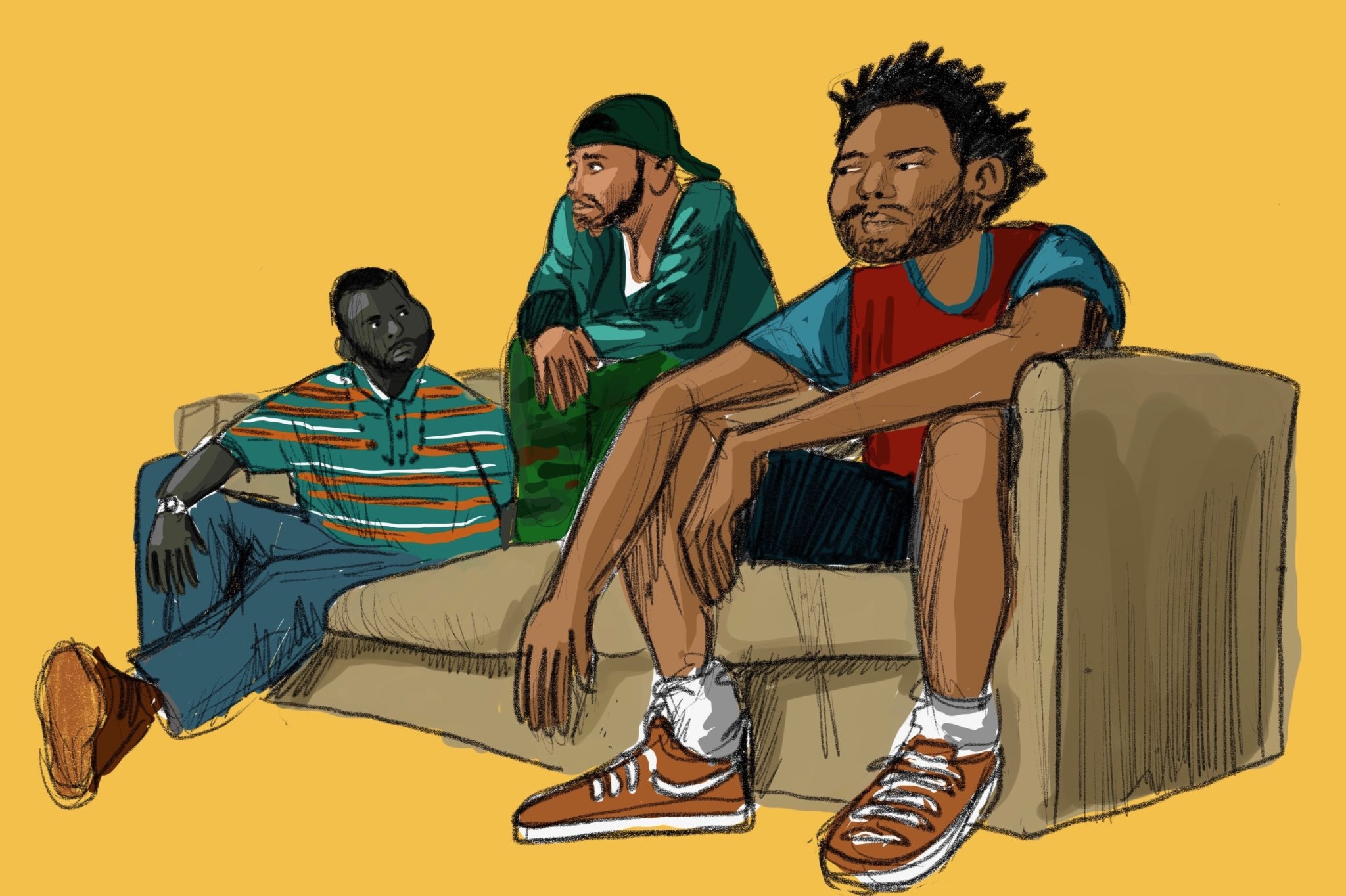 In Quentin Tarantino’s 1994 cult masterpiece Pulp Fiction (referenced by Glover in episode two with glowing chicken wings), there is genius through rare nuggets of wisdom and insight peppered in between layers of chaos. Moments like these ring true amidst the unthinkable events happening around the characters and similarly set a new contextual lens for the audience to perceive those events. Donald Glover’s self-written, -acted and -produced passion-project “Atlanta”is amazing at doing this exact thing.

The show contains countless ridiculous instances for the main characters, including but not limited to a shooting, a black, Christian Justin Bieber, a fourth-grader wearing white face, wringing out a baby’s diapers to try to pass a drug test, buying drugs from the Migos and, in the season two premiere, Katt Williams holding an alligator in his bathroom. Despite this and constant hilarious scenes of humor, the most important and lasting moments of “Atlanta” are just that: moments. Little quotes, particular song choices, landscapes and stylistic anomalies all add up to one of the most brilliant shows our generation has ever seen.

Glover and his team have meticulously made very specific and keen decisions here to produce an incredibly funny, intelligent, clever and — for lack of a better word — woke piece of televised artistry. These decisions contribute to a powerful message of race, gender, poverty and struggle that is extremely crucial to the surrounding culture. With both Golden Globes and Emmys under its belt, “Atlanta” is definitely the show to watch right now and is the show that our divided culture needs now more than ever before.

While revolutionary film “Get Out” breaks ground in presenting the black experience in an all-white context, “Atlanta” finds success in presenting the black experience in a black context, where deadbeat intellectual Earn observes the broken institution around him and asks real questions. Following Earn and his on-the-rise rapper cousin Al — also known as Paper Boi — the general theme of the show is that their environment throws them curveballs and they react accordingly. For reference, the best model of this comes in the pilot when you see Glover’s face after his white friend says the “N”-word. Although I personally cannot relate, I imagine that the constant events like these are used in the show to accurately demonstrate the modern black experience: a lot of bad things happening and a lot of questions. And Glover asks all the right questions.

In episode two, while in the police station awaiting bail, we see this kind of passive intellect in action. Arguments and anecdotes happen all around Earn, and later, when he sees a deranged homeless person beaten by police, he says, “Why is he in here every week? He looks like he needs help.” In the finale to season one, we see Al show the same kind of confusion after he witnesses a drug dealer get shot and killed by police; “Ya’ll really need all them bullets man?” In these instances of an unconventionally passive main character, the audience begins to see the power of the environment of Atlanta and the sad truth about agency in the people of these communities.

In the show’s most powerful moments, however, we can see the characters in “Atlanta” giving us some answers. Paper Boi’s talk show mic drop in season one, episode seven shakes “Atlanta” to its core when he rants, “Caitlyn Jenner is just doing what rich white men been doin since the dawn of time, which is whatever the hell he want.” Later, in episode nine, the tension builds to Earn’s glorious rant at the plot’s climax, where he erupts on Vanessa’s mom and stepdad. In a satisfying storm of words, Earn snapped to the white stepdad, “Stop stunting on me about my culture. I’m not gonna go back to Africa and find my roots because you know what? I’m fuckin broke dude. And stop being so likeable. And don’t be like ‘I understand,’ because you don’t understand.” The carefully placed victories and moments of clarity from the show are powerful and create a narrative that is effective in building tension.

Along with the well articulated commentary on race, “Atlanta” also finds a voice in speaking on other social issues such as poverty, sexuality and masculinity. Earn always functions as the voice of reason in managing his cousin’s rap career, suggesting notably in the finale that, “stunting is kind of a trap. We should probably make a little bit more money first before we start showing it off.” Although a logical and obvious statement in the given context, scenes like these in the show really speak to much larger issues, which, in this instance, is the ongoing phenomenon that young successful rappers often have trouble managing money.

Earlier in the season we see homosexuality and masculinity in the black community being addressed when two guest actors argue about how gay it is to be with a man in drag. After one man claims that men have sex with men in jail anyway and that it is still not frowned upon, he is met with the response, “Yeah but that aint gay, that’s just jail. You was on the outside … That boy gay as hell.” In the most uncomfortable and equally hilarious example of commentary, a talk show in episode seven documents a young black male that instead chooses to identify as a thirty-five-year-old white man.

What these anecdotes display is “Atlanta”’s ability to properly address social issues by sometimes depicting real everyday situations and sometimes flipping those concepts over on themselves. This, again, is reflective of the observant nature of the cast of characters. In providing these intellectuals with odd, crud and culture-bending situations, justice or not, a much larger and articulate picture is painted about what is really going on.

Despite “Atlanta”’s countless strengths such as cast, dialogue, symbolism and cinematography, the most important — and truly the coolest — is representation. “Atlanta” is unapologetically black in a historically white industry and is reaching audiences of all backgrounds. Also, while many shows about marginalized communities use their premise as sort of a gimmick, “Atlanta” succeeds in accuracy and tells intricate stories through the black lens. To simplify, “Atlanta” does not parade blackness around for others to observe from their own view, but rather puts the audience into the black experience. One of the most exciting ways “Atlanta” does this is, of course, through the soundtrack, which features almost exclusively black artists.

As the show follows a rapper and his cousin manager, Atlanta appropriately has an extremely high rap representation. This newest episode alone features Tay-K’s on the run anthem “The Race.” Larger rappers like Kodak Black and Gucci Mane are also featured and proper homage is given to Atlanta icons Outkast in the finale to season one. “Atlanta” also finds proper backgrounds in genres outside of rap, by including artists such as Kamasi Washington and Curtis Mayfield on the roster too. The most memorable moment of representation is undoubtedly the Migos cameo. It comes as a celebratory moment of reflection for the city of Atlanta, as the city’s biggest musical success ever is featured and even shown selling drugs as a throwback to what funded the start of their career. These references to black culture provide satisfying nods to the people that understand them and, more importantly, expose a larger audience to the amazing things that it has to offer. Much like how a rap sample leads listeners to go back and find the sample’s origin, “Atlanta” is showcasing an exciting culture and, hopefully, leading others to explore it more.

“Atlanta” is nothing like any TV show the world has ever seen before. It is more real and more black than any show has ever been. It takes risks, it immerses the audience and it speaks huge volumes in brief moments. It has, in a little over a year, done wonders for black culture, shedding light on semi-hidden issues and taking what we thought we knew about race and turning it on its head. Through introspection and criticism, “Atlanta” makes us as viewers tackle real world issues head on. This amazingly complex, weird and intelligent creation from Glover shows a world of potential for the future of the artist. He may not be the one to save our divided world, but he can definitely tell us where to start.