The Daily Nexus
Tennis
‘Chos Travel to Arizona for Weekend Matches Against Wildcats & SunDevils
March 1, 2018 at 5:00 am by Andrew Bishop 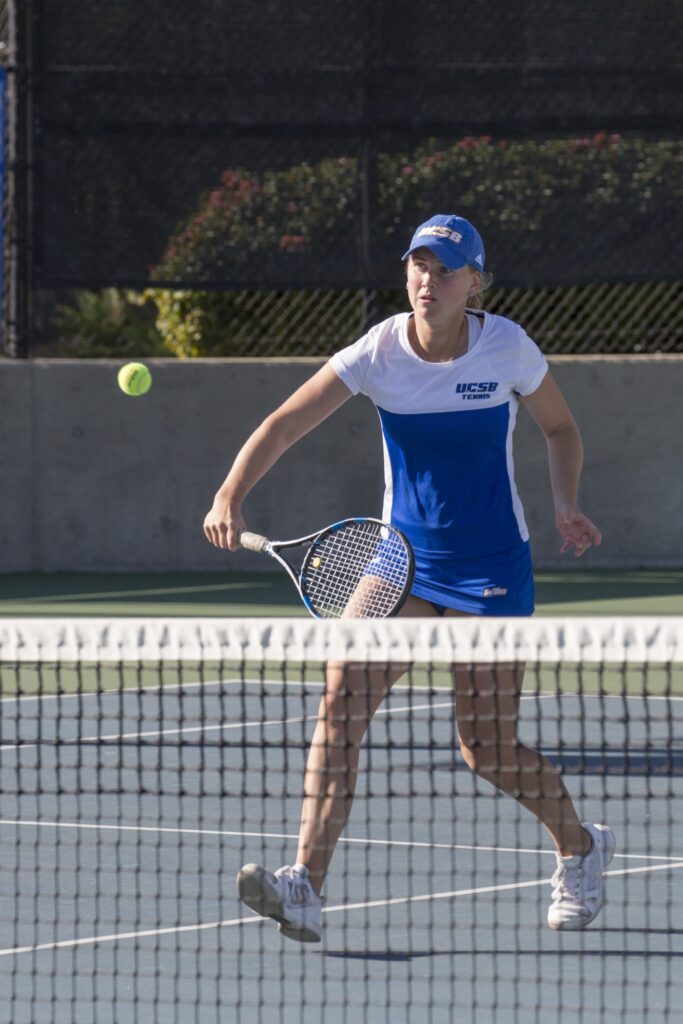 Palina Dubavets comes to the net for a short hit. Dustin Harris/Daily Nexus

Following a 4-3 loss to SMU on Tuesday, the UCSB women’s tennis team will travel to Arizona on Friday to face the University of Arizona, followed by No. 33 Arizona State on Saturday.

The Gauchos, who are 5-7 overall, are coming off of a missed chance to extend their win streak to three consecutive matches for the first time this season. The final score was not indicative of how intense the match actually was, as UCSB trailed the Mustangs for most of the match and opted to play its remaining matches out on each court after SMU secured the match point at 4-1.

Tuesday’s loss was a disappointing one for the Gauchos, who fell just one match short of sweeping their most recent three-match stint at home.

The Gauchos will not have much time to rest and recover, as they will have to face yet another challenging opponent, Arizona, on Friday. The Wildcats are currently unranked on the season, but have experienced a solid 7-4 season despite having a schedule dotted with a number of top ranked opponents.

Unlike UCSB, Arizona has had nearly a whole week of rest after falling 7-0 to No. 39 NC State on Saturday and is motivated to break out of its most recent two-game losing streak which began with a 4-0 loss to No. 8 Texas Tech last Friday. Friday’s match is shaping up to be quite the uphill battle for the Gauchos.

The weekend will not get much easier for the Gauchos, who will face No. 33 Arizona State the next day. The 5-3 Sun Devils have had an impressive season, with only three narrow losses to top ranked teams in No. 19 Oklahoma State, No. 15 Kentucky and No. 11 Ohio State. ASU is coming off a nail-biting 4-3 road loss to No. 11 Ohio State on Sunday and will likely put up a serious fight against UCSB.

Arizona State’s roster features two nationally ranked singles players with No. 84 freshman Lauryn John-Baptiste and No. 107 sophomore Savannah Slaysman. John-Baptiste has been dominant this season, dropping just one loss in singles play to Oklahoma State, leaving her with a personal record of 5-1.

UCSB’s doubles battle against ASU will likely be its most difficult test of the weekend, as the Sun Devils’ roster also features two nationally ranked doubles pairings. The Sun Devils’ No. 27 ranked tandem of Slaysman and freshman Tereza Kolarova, and No. 46 tandem of seniors Kelley Anderson and Nicole Fossa Huergo have dominated opponents this season and will look to do the same against UCSB.

Doubles play has been one of the Gauchos’ more prominent struggles this season, who at one point dropped three doubles points in a row to opponents. Despite lacking consistency in doubles play overall, UCSB has experienced exemplary play by its No. 57 ranked duo of seniors Natalie Da Silveira and Palina Duvabets, who are currently on a three game winning streak in doubles play.

The Gauchos’ tandem of Da Silveira and Duvabets are not unaccustomed to upsets, after having defeated No. 44 Cal’s No. 1 doubles pairing on Feb. 18. While Arizona State appears to be one of the Gauchos’ biggest threats in doubles play this season, fans can certainly expect strong play from their duo of seniors, with the possibility of a major upset.

This weekend will prove to be quite tough for the 5-7 Gauchos, who have experienced a recent onslaught of matches without much rest in between. However, the prospect of toppling challenging foes continues to be a motivating factor for UCSB, which has yet to secure a victory in any of its ranked matchups this season.

The Gauchos will face Arizona on Friday, Feb. 2, at the Robson Tennis Center in Tucson, Arizona.

Santa Barbara’s match against Arizona State is scheduled to take place the day after on Saturday, Feb. 3, at the Whiteman Tennis Center in Tempe, Ariz.