The Daily Nexus
On the Menu
Holy Ham! Should You Remove Pork From Your Dinner Plate?
February 22, 2018 at 12:19 am by Morgan Bakowsky

For the last three years and three months I have been a vegetarian. Aside from a few moments where I was unaware of chicken broth in certain restaurant foods, I have not had any actual slip-ups. As I emotionally prepare to start eating meat again soon, I am thinking about just how much of it I am going to incorporate into my diet. After much thought and research, I have come to one clear conclusion: I will not eat pork. Here are five reasons why you should reconsider eating pork as well. 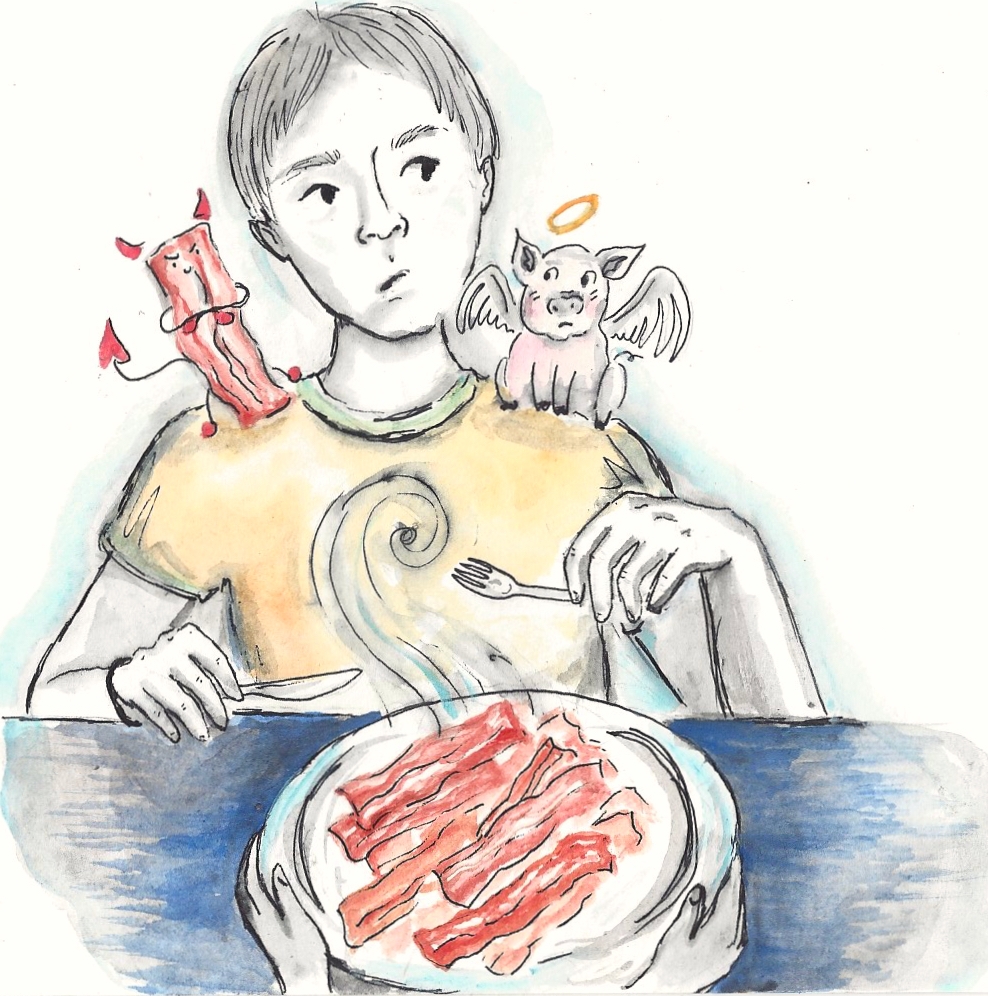 1. Factory pigs are filthy
Pigs are very clean animals in nature. When they have plenty of space to live, they separate the place where they defecate from the places they drink water, cool off and eat. However, they do not have sweat glands. This means that they overheat easily, so to alleviate this they roll in mud like many other thick-skinned animals. Pigs that live on small farms and in the wild do this without problem; however, the pigs that are processed for consumption in the United States are often forced to do all of this in one small space.

This leaves them susceptible to reabsorbing anything that they excrete, including but not limited to: bacteria, toxins, disease, worms, common allergens and parasites. Even though they have clean habits, they are the farm animal that carries the most of these things in general. This is not just because they do not sweat out the things their skin absorbs, but they also have digestive systems that work quickly but ineffectively so they do not filter out most of the unhealthy things they eat. Pigs are known to eat feces (their own or anything else’s), dead animals and trash when food is short. Anything that is in those items goes into a pig’s meat.

2. Their meat is not healthy
Besides storing various unmentionables, pigs store a lot of fat in their meat. Consumption of large quantities of saturated fat over time has been linked to various lifestyle diseases such as heart disease, high blood pressure, diabetes and osteoporosis. In addition, most of the pork provided in the United States and other large capitalist economies is processed. In order to keep up with the consumption of pork, the industry needs to raise as many pigs as possible. As I mentioned before, pigs are exposed to a lot of bacteria and disease, so they get pumped full of antibiotics to treat them as well as various drugs to make them get fatter more quickly. When eating pork, you may be getting these as well, and this is linked to resistance to superbacterias and can cause other medications you might take to be ineffective.

3. Production is bad for the environment
Factories used to produce pork products take up a lot of land that could be used for (forgive my language) organic food products. Pork could potentially be produced ethically and safely on farms where pigs can keep themselves cleaner and be treated a lot better. A whole lot of water is also used in these factories in order to process the meat. On a farm, this would instead be used for feed, water and cleaning which would drastically reduce the amount wasted on washing away the byproducts of slaughter. Speaking of byproducts, did you know that all of the pigs’ feces, urine and anything else washed out of their pens is dumped in locations where it can easily be blown into or tracked onto the property of people living or working near a factory farm? Now you do. GROSS.

4. The industry is filthy
It is no secret that pigs and other farm animals forced into factory production live in cruel and unclean living conditions. Likewise, the working environment for humans is also unfair. The work, as expected, is undesirable and is therefore done mainly by undocumented workers who are paid less than minimum wage. Reasons that the work is undesirable include: working in pig feces and remains, being exposed to an element in pig brains that causes neural damage in humans and heavy-quick moving machinery. Many workers in the industry wind up with permanent disabilities and injuries.

While these workers are slaving away, the big-wigs they are working for are sitting back and profiting. Most of the pork produced, in not just the U.S. but also the world, is under a few large-scale companies. This takes away from the profit of small farmers while filling everyone’s bellies with meat that is less clean and healthful than the meat that comes from small-scale farms.

5. Bonus round: religion, genetics and ethics
Many cultures throughout history have disavowed pork because of its impurity. This includes various Christian religions in addition to sects of both Islamism and Judaism. Remember in high school when we dissected pigs? That is because genetically they are very similar to humans, and if that isn’t enough for you, they are similar in intelligence to dogs. Pigs like to play and are known to be smarter than dogs (please don’t crucify me). Ethically, eating pork is like eating one of your family.

So what can we all do?

As someone who eats well-balanced meals all day on some days but eats carbs all day on others, I’m not one to judge people on their dietary choices. I think that everyone has the right to eat whatever they want and it’s nobody’s business. I do, however, have some recommendations, at least when it comes to pork:

Be informed about the source of the pork you eat and the conditions it is produced in.

Limit consumption of pork to maintain a healthful diet.