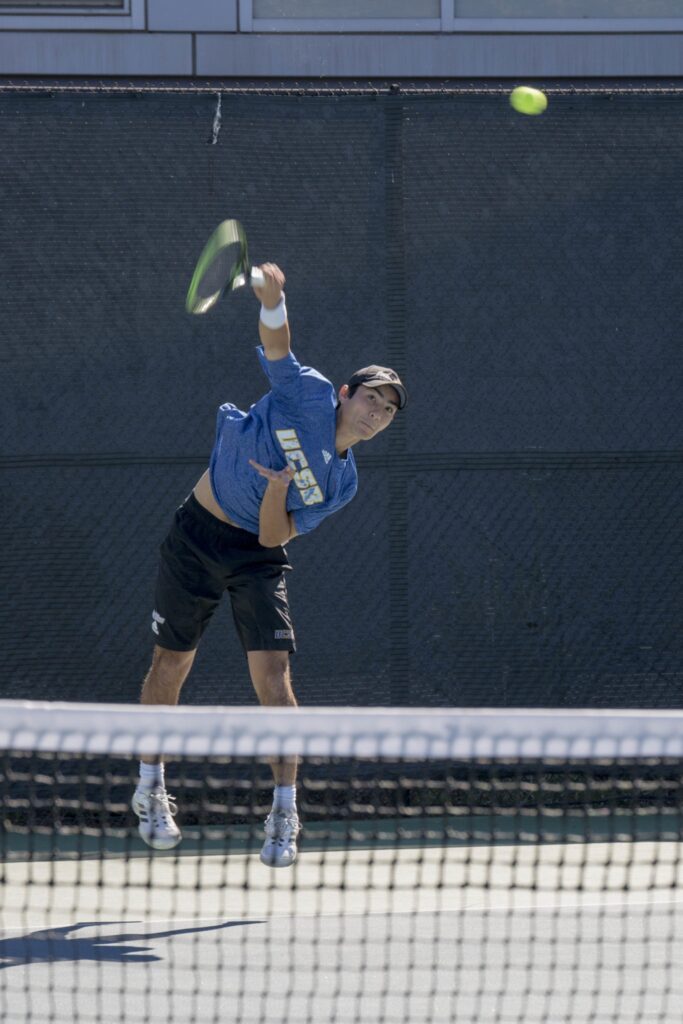 The Gauchos bounced back from their loss against USD two weeks ago with a 7-0 dismantling of USF on Saturday. Perhaps more important than the victory itself was the confidence it instilled in the team; senior Simon Freund cited his victory as “a much needed win.” In that victory, the Gauchos once again proved their depth when Freshman Henrik Atlevi, who subbed in just before the start of singles, put Santa Barbara ahead 1-0 with his first ever victory in a Gaucho uniform.

The entire team will have to carry that confidence into their match on Saturday when they take on a red hot Utes team that has won seven matches in a row, coming into their matchup against the Gauchos with an overall 12-1 record.

However, the Utes have failed to secure any marquee victories this season, the closest semblance to one being their 4-3 victory over Utah State, who is 7-3 on the season.

While they lack key victories, however, Utah also lacks any bad losses — their only loss of the season came on the road against Harvard, a historically powerhouse school who currently sits at 9-2.

“The upcoming matches will be very challenging as we’ll be trying to adjust to playing indoors at 5,300 feet of altitude,” Head Coach Marty Davis said.

For doubles — an area that has often caused the Gauchos trouble this year — Utah has the freshman duo of Randy Cory and Russell Benkaim on court one. While young, both ranked in the top ten in doubles in the UTSA rankings and were the only doubles pair to win in the match against Harvard.

Much like UCSB, the Utes boast strong depth — the only match they won by less than two was the aforementioned match against Utah State.

With freshman Viktor Krustev still dealing with an injury, junior Hironori Koyanagi will have to continue to play solid tennis on court five for the Gauchos.

Also working in Santa Barbara’s favor will be the fatigue factor. On Friday, Utah will have to take on a strong New Mexico team before their matchup with the Gauchos 24 hours later.

On Sunday, UCSB will take on that same New Mexico team, who enters the weekend with a 5-3 record. Earlier this year, the Lobos fought the 25th-ranked Texas Tech Red Raiders in Lubbock, only losing by a score of 4-3.

That being said, the team has battled inconsistency, as is demonstrated by a loss to a Northern Arizona squad that Utah easily handled.

In part, that loss can be attributed to injuries and the spread of the flu, but the loss underscores the lack of depth on a team that only fields eight players total.

The Lobos most consistent contributor this season has been Senior Bart Van Leijsen.

He has been named All-Mountain West for both singles and doubles the last two seasons, and in his sophomore year won the sixth most doubles matches in New Mexico history.

Junior Ricky Hernandez Tong has also led a top-heavy squad this season; as a freshman, his .679 win percentage lead the team.

The Lobos will be a difficult matchup for the Gauchos, especially considering that they will have an extra day of rest. UCSB will likely have a tough match against the Utes, and could be playing on tired legs against New Mexico.

“Obviously, winning on the road against two ranked teams would be very helpful [for our ranking],” Davis said.

The Gauchos will take on Utah on Saturday at 12 p.m., followed by their match against New Mexico on Sunday at 12 p.m. as well.