The Daily Nexus
News
SB County Seeks To Improve Disaster Preparedness
February 15, 2018 at 12:21 am by Tamari Dzotsenidze and Hayley Tice

In the wake of the Jan. 9 mudslide that devastated Monetico neighborhoods, Santa Barbara County has unveiled new disaster preparedness policies to improve communication between the county and citizens. 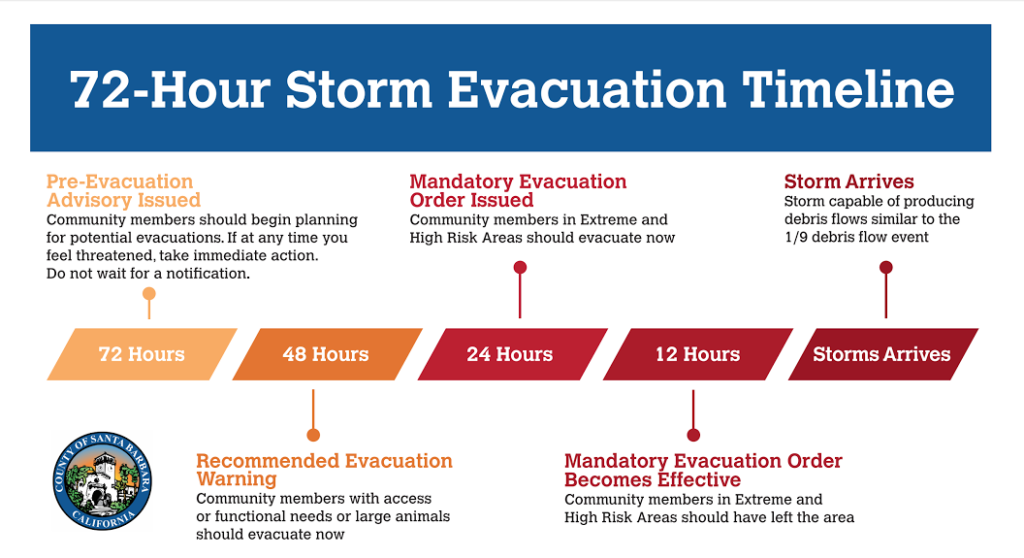 The new policies include a 72-hour evacuation timeline, an interactive county map and new storm evacuation definitions. Residents can type their address into the map to determine whether they are in a high-risk area.

At the time of the Thomas Fire and Montecito mudslides, the UC Santa Barbara Emergency Flip Chart did not outline specific procedures. The section of the chart titled “severe weather” says to monitor media reports, campus emails and ensure that roads are safe before leaving.

For those experiencing severe weather at home, it says not to take risks to reach campus.

“We have to continue to get better and learn more from every disaster,” said Santa Barbara County First District Supervisor Das Williams at a press conference. “We want to prepare this community for the next event and for the continued clean-up.”

Montecito Fire Protection District Division Chief Kevin Taylor said that the goal of these policies is to outline clearly the risks of impending storms, with a focus on the areas affected by the Thomas Fire.

The county is urging citizens to sign up for alerts to ensure that they are aware of any weather changes.

During the Thomas Fire, two alerts were sent out through UCSB Alerts to correct the erroneous evacuation order issued by county officials and to alert students about the health risks at local beaches.

Associate Vice Chancellor John Longbrake said in an email that “unfortunately” only about 4,000 students subscribe to text alerts for UCSB Alerts. He encouraged students to sign up to receive these alerts at alert.ucsb.edu.

The county’s new policies outline a timeline for the 72 hours before a storm arrives. There will first be a pre-evacuation advisory, then a recommended evacuation warning and then a mandatory evacuation order.

The Storm Evacuation Definitions says that with a mandatory evacuation order, “extreme risk for loss of property and life exists,” and that “personal discretion is not an option.”

“A strong possibility exists that we will need to call for future evacuations,” he said. “While evacuations are inconvenient and troublesome, they are also temporary and incredibly important. Most importantly, they can be life-saving.”

In the case of an evacuation, university policies are also vague. According to the Flip Chart, the UCSB Emergency Operation Center Executive Policy Group has the power to implement an evacuation in the case of a “major emergency.”

During the Thomas Fire, many students were frustrated about the poor air quality and the quality of the masks given out by the university.

UCSB’s Student Health Services (SHS) typically keeps about 5,000 N95 masks on hand and ordered an additional 18,000 during the fire, according to university spokesperson Andrea Estrada.

Estrada said that surgical masks were distributed as a temporary measure.

After the initial supply of 5,000 masks was distributed and SHS was waiting for delivery of additional N95 masks, surgical masks were distributed as a temporary measure.

“But students were advised to return to Student Health to pick up the recommended N95 masks,” she said in email.

The fire impacted patient care at SHS as well.

Estrada said that while SHS stayed open, its employees were unable to access electronic medical records during the blackouts and used “emergency procedures” for paper communication.

SHS has a backup generator that it used during these periods for essential services, such as keeping vaccines at proper temperatures and lighting.

According to Estrada, generators on campus are tested on a monthly basis, with an annual test where building emergency systems are transferred to the generator to simulate an actual event.

Estrada also said that the campus implemented several policies to respond to the fire, including a mutual aid provision among UC campuses, an Emergency Leave from Work provision and a memorandum of understanding between UCSB and the Red Cross that enabled the Red Cross to host a shelter on UCSB property.

The campus communicated to students through email, a page on the UCSB Current, social media channels, a special Call Center that was created to field calls related to the fire and a banner on the website.

Longbrake also recommended that students and other community members sign up for alerts from the county’s emergency alert system, Aware & Prepare at awareandprepare.org.

A version of this story appeared on pg. 5 of the Feb. 15 issue of the Daily Nexus.