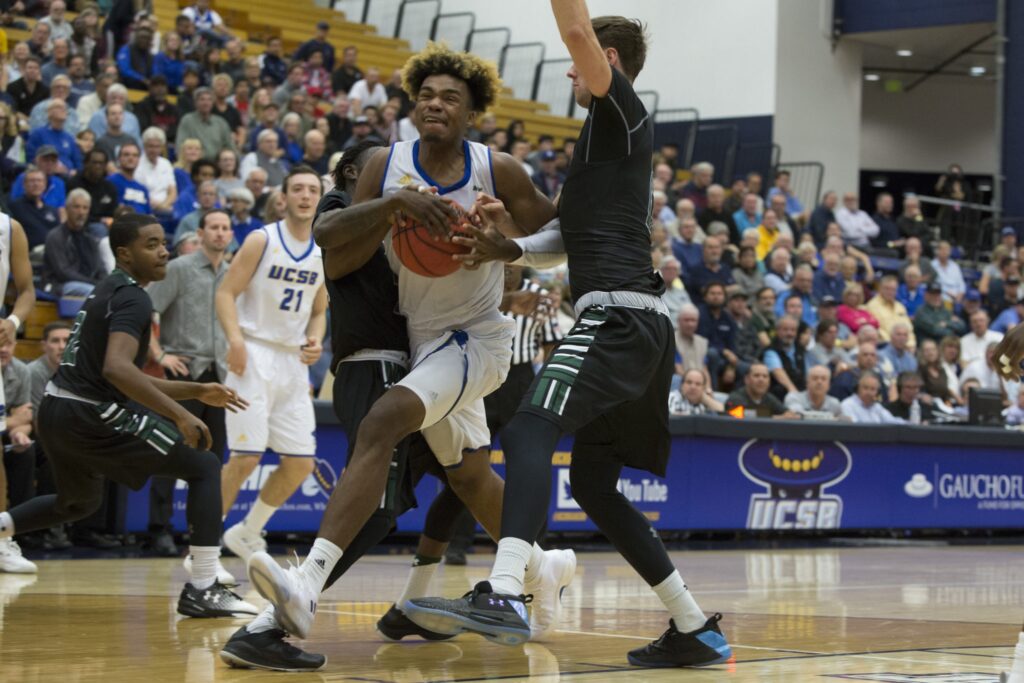 The UCSB men’s basketball team finally claimed sole possession of first place in the Big West on Thursday night with a 90-81 win over UC Davis. This was the seventh victory in a row for the Gauchos, tying their 7 game streak earlier in the season for the longest since 2016 and bumping them up to a 19-5 overall, 8-2 Big West record.

The Gauchos also played the role of streak-busters as the Aggies 19 game home win streak, good for the fourth-best active streak in the NCAA, was cut short on Thursday. UC Davis dropped to a 16-8 overall, 7-3 conference record and now sits in second place in the Big West, just one game back from Santa Barbara in the conference standings.

Coming into this game there was plenty of uncertainty in terms of how these two teams were going to match up. While they both had been battling it out in the Big West conference standings since the beginning of the season, the Gauchos and Aggies hadn’t actually played against each other yet on the court. Even the Davis students were anticipating this one, as the atmosphere at the Pavilion was almost play-off like at the tip-off with about 3,500 people in attendance.

The first half was all UCSB however as the Gauchos came out of the gate scorching hot, building up a twenty point lead at one point and ultimately shooting over 60% from three for the period.

A huge part of SB’s first half dominance was the unselfish yet aggressive mindset that first year Coach Pasternack has imprinted on this team. The first four buckets by the Gauchos were all made by different players and all assisted on, and the ball-movement on offense was creating a lot of holes in a usually stout Aggie defense.

We have seen many times throughout the season that just the threat of the Gaucho’s three point shooting has opened up countless passing and driving lanes, but when they’re actually knocking them down it becomes an almost impossible tasks for opposing defenses to guard them.

While it was a great team effort, the best player in the half for UCSB had to be Marcus Jackson. The graduate transfer from Rice finished the half with 15 points on 6-8 shooting, and continues to prove how important he is to the facilitation of the offense this year.

While it should come to no surprise that Jackson is able to light up the scoreboard every now and then (he was the 35th player in Rice history to score 1,000 points in his time there), his high basketball IQ and ability to knock down the three adds an entirely new element to this Gaucho team that along with the performance of Leland King II and Max Heidegger so far has created arguably the best trio in the conference.

Even with all that SB was doing great the deficit was only 12 points going into halftime, mostly because of the play of Junior TJ Shorts II. The Aggie guard ultimately finished the game with 28 points, 8 assists, and 7 rebounds, and was tasked with making sure the lead didn’t get out of hand for most of the game.

Even at just 5’9, his quickness and shooting ability definitely puts him up on the short-list of best players in the conference, and he will be a big part of the scouting report for the Gauchos when they take on this team again next week.

UC Davis actually made a run late in the second half, cutting the lead down to five with a minute to go in the game. Junior guard Siler Schneider broke past the 1,000 point mark with his first shot in the second half, a huge milestone for a player at this level, and scored 10 points in the last frame to keep the Aggies in the game.

The Gauchos were able to hold Davis off thanks in part to the contributions of Junior Jarriesse Blackmon, whose 8 points off the bench in the half could not have came at a better time.

While Blackmon hasn’t been able to get much going on the offensive end in his time in this season, if performances like this become consistent it would be huge for this team.

Looking ahead, the Gauchos stay on the road as they get set to take on the other second place team in the Big West, Long Beach State. Although Thursday’s win was big, UCSB knows more than anyone that the season is not close to over, and they’ll have to keep fighting for anything they get.

UCSB takes on LBSU at 7 p.m. on Thursday.