The Santa Barbara County Sheriff’s Office has administered Narcan, an opioid overdose treatment, nine times since the start of its Naloxone Program in April 2017, five of which occurred in Isla Vista. 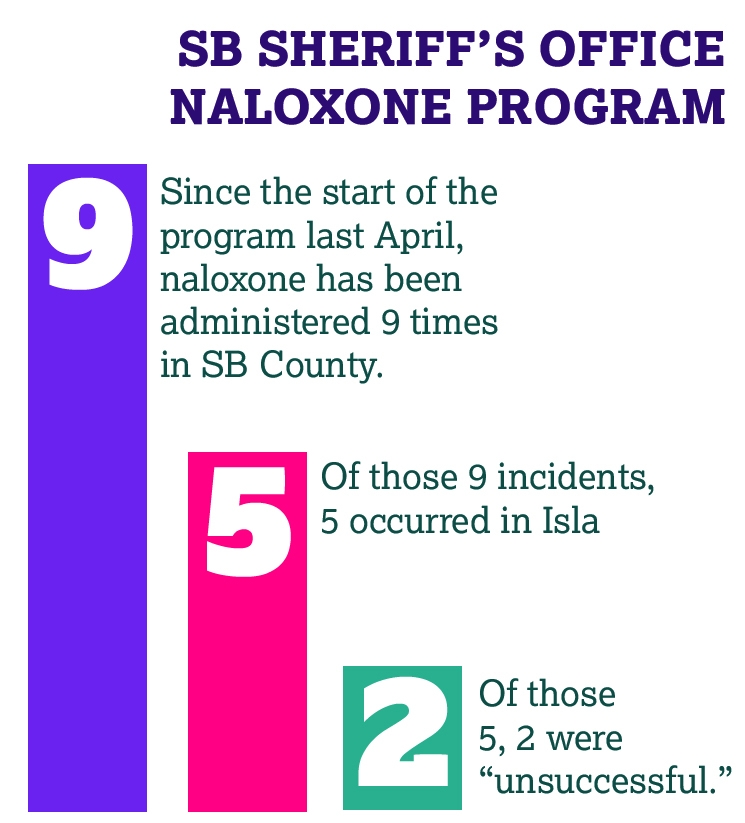 Of the five incidents in Isla Vista, two were “unsuccessful,” according to Craig Bonner, operations support division commander for the Santa Barbara Sheriff’s Office (SBSO). One incident resulted in a death and the second subject did not die, but also did not fully recover.

SBSO worked with the Santa Barbara County Public Health Department and its Emergency Medical Services Agency last year to develop the Naloxone Program to combat the increasing number of overdoses in the county.

Naloxone hydrochloride is the active ingredient in the prescription drug Narcan, a nasal spray that stops the effects of opioids, including extreme drowsiness, slowed breathing and loss of consciousness.

Between 2011 and 2016, the Sheriff’s Coroner Unit observed a marked increase in overdose deaths. Opioids were present in approximately 65 percent of the overdose deaths that occurred in Santa Barbara County in 2016, according to the program press release.

SB County experienced 30 deaths due to all opioid-related overdoses in 2016, according to the most recent calendar year of data available.

“At this point a number of initial first responder naloxone programs throughout the United States were showing significant promise in decreasing the number of people that die from opioid overdoses,” Bonner said.

In October 2017, a 19-year-old male UC Santa Barbara student who was suffering from an apparent overdose in I.V. was administered naloxone and then transported to the hospital, the Nexus reported. Police found the student unconscious, but he survived the incident and woke up soon after the spray was administered.

In 2015, there were 7.7 opioid overdose deaths per 100,000 residents in SB County and 193 incidents of 911-emergency calls where Narcan was administered by first responders.

The number of 911-emergency calls where a first responder used Narcan increased in 2016 to 260.

According to an SBSO press release about the Naloxone Program, sheriff patrol personnel were trained to know when to give Naloxone to block the effects of opioids.

According to the Narcan website, naloxone reverses the effects of opioid overdose in two to three minutes, which gives the opioid-poisoned person time for emergency medical help to arrive.

According to Michelle Wehmer, the SB County Public Health Department epidemiologist, Narcan can be administered for several reasons, including when a first responder sees a subject not breathing and decides to administer the drug, during an accidental drug overdose due to confusion of being on several medications and recreational narcotics use such as snorting and ingestion.

The amount of training an agency or staff person has received can affect the likelihood of a responder to administer Narcan. Naloxone is only effective for opioid drug overdoses.

First responders do not always know which drugs the patient might have ingested, which makes training more helpful for deputies who are now administering the drug on duty.

According to the Narcan website, the nasal spray should be administered immediately and does not take the place of emergency medical care.

It is advised that emergency medical help is sought right away after giving the first dose of Narcan even if the person wakes up because they may relapse into breathing difficulty.

A version of this article appeared on p.1 of the Feb. 8 print edition of the Daily Nexus.