The Daily Nexus
Science & Tech
Elevated Levels of Potassium, Other Metals Found in Ash From Thomas Fire
February 8, 2018 at 12:30 am by Mika Kaczmar

Part of the ash left over from the Thomas Fire contains unexpectedly high levels of potassium and other metals, UC Santa Barbara researchers concluded.

Following the Thomas Fire and the Montecito mudslides, researchers from the UCSB Bren School for Environmental Science and Management tested the concentrations of various elements to determine if the remaining ash was a concern to people in Santa Barbara County.

Samples of ash were collected from 18 locations across Santa Barbara, Santa Paula and Goleta to test the concentration of various elements.

Approximately 20 percent of the ash was a mixture of heavy and light metals such as calcium, aluminum, potassium, iron, magnesium, sodium and phosphorus, according to their tests. 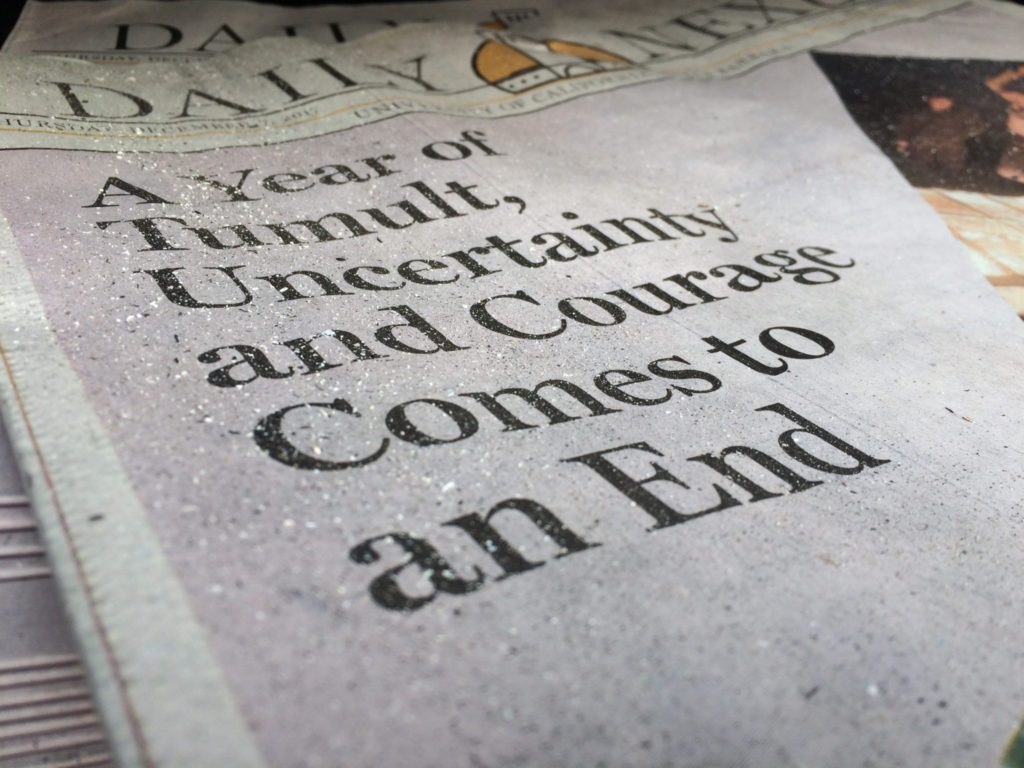 Ash from the Thomas Fire accumulates on a past issue of the newspaper. William Tracy / Daily Nexus

According to UCSB Environmental Science and Management Professor Arturo Keller, these levels were “higher than usual.”

Keller, along with scientist Anastasiia Minakova, postdoctoral student Yuxiong Huang and graduate student Qian Gao, used a chemical analyzing instrument to determine the concentration of elements in the soil by parts per trillion.

The researchers then compared the result to the level of toxicity of the various elements in the soil.

Potassium, a nutrient present in vegetation, was found to have an above average level of toxicity. This could be due to the burning of greenery during the Thomas Fire, according to Keller.

Although levels of potassium and other metals are higher than expected, it is not cause for worry, Keller noted.

“I don’t think we will see those becoming a major problem.” Keller said. “I think they are more of a concern in terms of inhaling the ash at that point than now on the soils.”

However, there is still some concern about UCSB students and others breathing in the remaining ash.

Keller advised anyone in areas affected by the Thomas Fire to clean up any remaining ash, as there is a risk of ash exposure leading to inhalation.

The Santa Barbara County Public Health Department also showed some concern for the remaining contaminants from both the Thomas Fire and the mudslides.

“Using leaf blowers stirs up ash and dust,” the department said in a Feb. 2 press release. “Ash and dust are larger particles, but over time, they break down into smaller, more harmful particles that can lodge deep into the lungs and cause serious health effects.”

The drying mud from the mudslides in Montecito is also problematic because of the contaminants that may be concentrated within.

Contaminants can range from gasoline to sewage, since these products were picked up by a rapidly moving mixture of water and earthy material, KPCC reported. This can be concerning to residents of Santa Barbara, where these particles can be transmitted and inhaled, causing adverse health effects.

As particles continue to surface due to the drying mud, the Air Pollution Control District (APCD) has administered portable monitoring devices to read fine particulate matter in the air in Montecito.

These devices make it easier for those affected to judge the pollution concentration in the air and make smarter decisions about the time they spend outdoors.

Goleta is measured to be between 0-50 PM 2.5, which means the area’s air quality is “good,” according to the APCD.

“Fire [has] this property of redistributing nutrients in our ecosystem. There were other metals, not very much, that we don’t like to have,” Keller said. “What we don’t want is for them to increase in our soils.”

Correction: The story has been updated to include a list of PM stations.