The Daily Nexus
Tennis
UCSB Come Up Short Twice in Three Matches, Get One Win in Home Opener Doubleheader
February 5, 2018 at 10:30 pm by Andrew Bishop 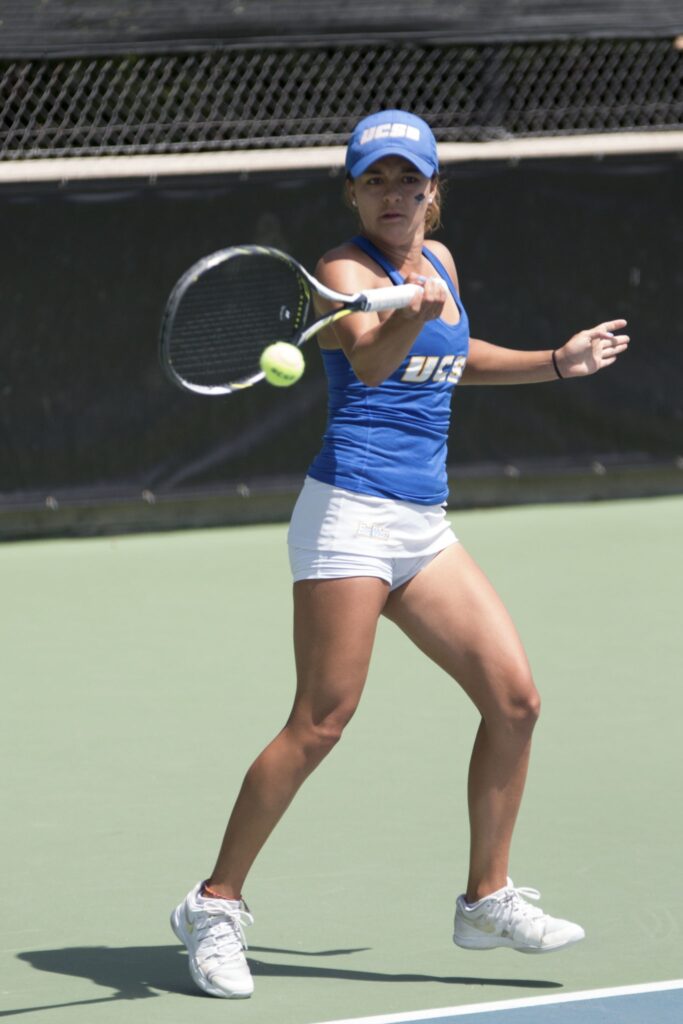 It was a busy weekend for the UCSB women’s tennis team, who competed in three strenuous matches in just two days. The Gauchos began their weekend with a match at No. 6 Pepperdine on Friday, and then faced off against the University of San Francisco and Kansas State in their home opener on Saturday.

Friday’s match against Pepperdine ended very poorly for the now 3-4 Gauchos, who were dominated by the Wave 7-0. Things appeared to be unbalanced from the get-go on Friday, with the Wave shutting out the Gauchos in back-to-back games in doubles play.

The imbalance continued throughout the match, as the Gauchos struggled to keep up with Pepperdine’s four nationally ranked singles players. Sophomore Amit Lev Ari came the closest to winning the Gauchos their only set victory of the day in her first set against Pepperdine junior, No. 44 Dzina Milovanovic; however, Lev Ari fell short 7-6, and lost her subsequent set, which brought the match to an end.

The Gauchos’ home opener on Saturday would not prove to be much easier, with a challenging doubleheader against USF and Kansas State. Despite suffering a tough loss the day before, the Gauchos went into their home opener with confidence, and a burning desire to bounce back from their trip to Pepperdine.

The Gauchos made quick work of USF, routing the Dons 4-0, and losing only a single set on court one.

“We were not so happy with the way we competed at Pepperdine, we lost a bit of confidence with that match, but we were able to win against San Francisco. “We were just a little bit better there,” Head Coach Simon Thibodeau said.

The match against the Dons helped the Gauchos regain some of their confidence, and prepare for a more difficult matchup against Kansas State.

The Wildcats and the Gauchos fought tooth and nail throughout the afternoon, but Kansas State came out on top with a score of 4-3. The Wildcats pulled ahead early in doubles play, after winning two games back-to-back against the Gauchos, leaving the third unfinished.

The Gauchos would soon tie things up in singles play, with the help of freshman Lise Sentenac, who dominated the Wildcats’ senior Carolina Lewis with scores of 6-0 and 6-1 in both of her sets.

Both teams would trade blows in singles play, and the match would ultimately be decided by the game between UCSB senior Natalie Da Silveira and Kansas State freshman Rosanna Maffei. Da Silveira secured a 6-2 victory in the first set, but Maffei came back in the second set, defeating Da Silveira 6-1.

By the start of the third set, the match was tied 3-3, making it the set that would decide the outcome of the match. The pair fought hard, but in the end, Maffei would come out on top 7-6 at the end of the nail-biting final set.

It was an emotional loss for the Gauchos, who were hoping for a clean sweep in front of their home crowd. The hard-fought loss to Kansas State brought the Gauchos to a 3-4 record on the season.

Coach Thibodeau acknowledged the areas where his team struggled, but he applauded their effort throughout a restless weekend.

“I thought they fought really hard against Kansas State. We got a bit of a slow start in doubles, but in singles we gave ourselves a chance to win,” Thibodeau said. “We left it on the courts, but its good experience to play these kinds of matches because it might happen in the future.”

Coach Thibodeau and the Gauchos will have plenty of time to recover and prepare for future matches, with their next being against Saint Mary’s on Saturday, Feb. 17 and No. 14 California on Sunday, Feb. 18. With two full weeks of rest, the Gauchos are likely to come back stronger for their trip to the Bay Area.