The American Federation of State, County and Municipal Employees Local 3299 union held protests across several UC campuses on Thursday, challenging the treatment of workers across the university system and commemorating the death of two workers killed on the job. 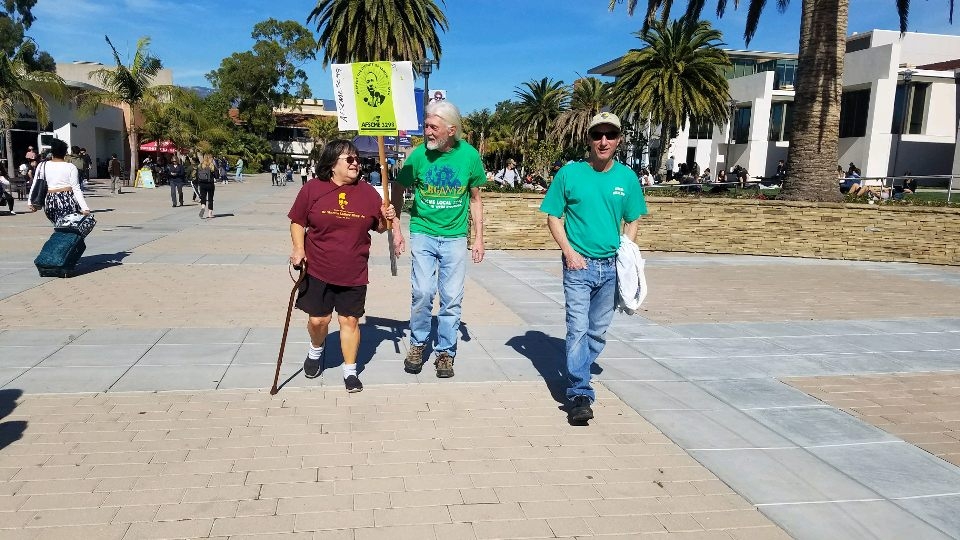 Approximately 40 people marched with signs outside of the UCSB Library and the Arbor, chanting “UC, UC, you’re no good; treat your workers like you should.” The protest was held first between 8 a.m. and 9 a.m. and later from 12 p.m. to 1 p.m.

Thursday’s picket line was held to show “solidarity” with the union’s bargaining team as it works toward reaching an agreement on issues like UC overstaffing and emergency layoffs, according to the American Federation of State, County and Municipal Employees (AFSCME) website.

Groundskeeper lead Juan Donato has worked at UCSB for seven years and joined Thursday’s protest because it is “symbolic” of the 50th anniversary of the death of two sanitation workers, who were killed on the job after their truck’s compactor malfunctioned.

“We deserve, we matter and we deserve to be treated with respect and dignity,” he said. “[It’s] interesting for me 50 years of fighting and [we’re] still in the fight.”

The incident prompted a strike in Memphis, which drew approximately 1,300 workers, according to the AFSCME website.

Gonzales has worked at UCSB for 28 years.

“This is about equality, security, dignity and fairness with all UC workers. What we want is protection for women, immigrants and people of color,” she added.

She said the workers protesting today want wages that increase with inflation, affordable health care, secure retirement and an end to the outsourcing of jobs.

Hijinio Camacho, known around UCSB and Isla Vista as “The Elotero,” also worked at the protest by serving food alongside AFSCME workers to those who were picketing. 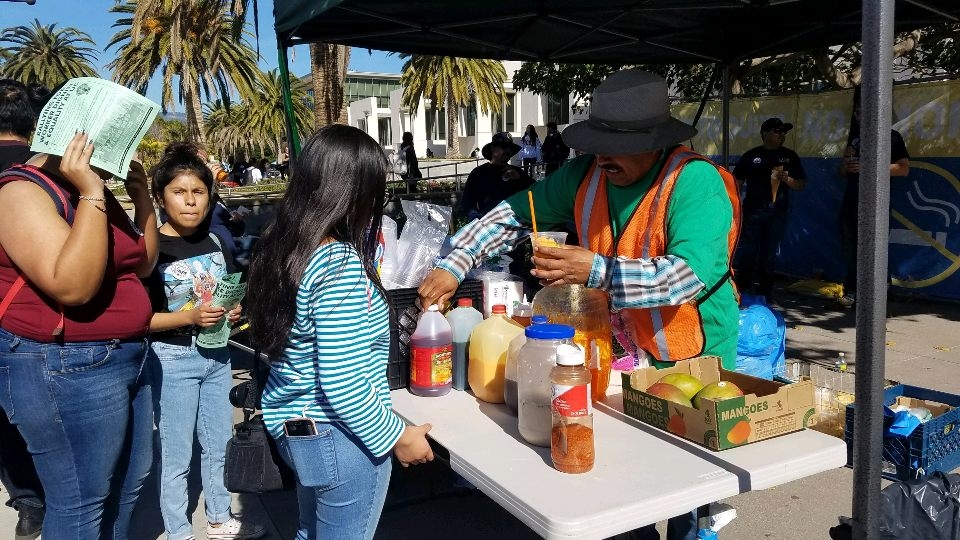 He recently made the decision not to hold fundraisers on UCSB’s campus because he cannot afford the high insurance costs required of campus vendors.

“We represent cooks, custodians, groundskeepers, so we’re right now trying to send a message to management saying that this is about equality, this is about fairness,” AFSCME organizer Mercedes Ramirez said.

“We want [the UC] to treat them right, and that’s why we have to do this,” she said.

Michael Kile, a fifth-year chemistry major and AFSCME intern, explained that he joined the protest today because of his father, who passed away from pancreatic cancer before Kile started his senior year of high school.

He explained that his father worked two jobs, one at U.P.S. and one working full time at California Lutheran University. His mom also worked full time as a teacher while she finished attending school.

“When I was 17, he was feeling sick and he didn’t want to stop working so he kept working, kept working, and he finally went to go get checked and it turned out he had pancreatic cancer, stage four,” Kile said.

“He wouldn’t have had to deal with that if this country can get the concept together that a single job, 40 hours a week, should be enough to provide for you and your family. Many of our workers are working through full-time jobs. If they end up with the same thing then there’s gonna be someone else like me who loses a parent,” he said.

He said he has had to drop out of school and has “literally lost weight from not being able to eat.” He has also been homeless during parts of his time at UCSB.

Kile said that over the past 40 years, unions have been in a “sharp decline.”

“Everyone from Democrats to Republicans have been attacking unions for a very, very long time,” he said. “I mean, Hillary Clinton was on the board of Walmart, which was one of the biggest union busters, Elon Musk is a union buster, Jeff Bezos from Amazon hates unions and the working conditions they produce are horrific.”

He also referenced the wage gap between men and women, explaining that the average pay from women to men is 78 cents an hour, but for Latinx women it is approximately 55 cents an hour.