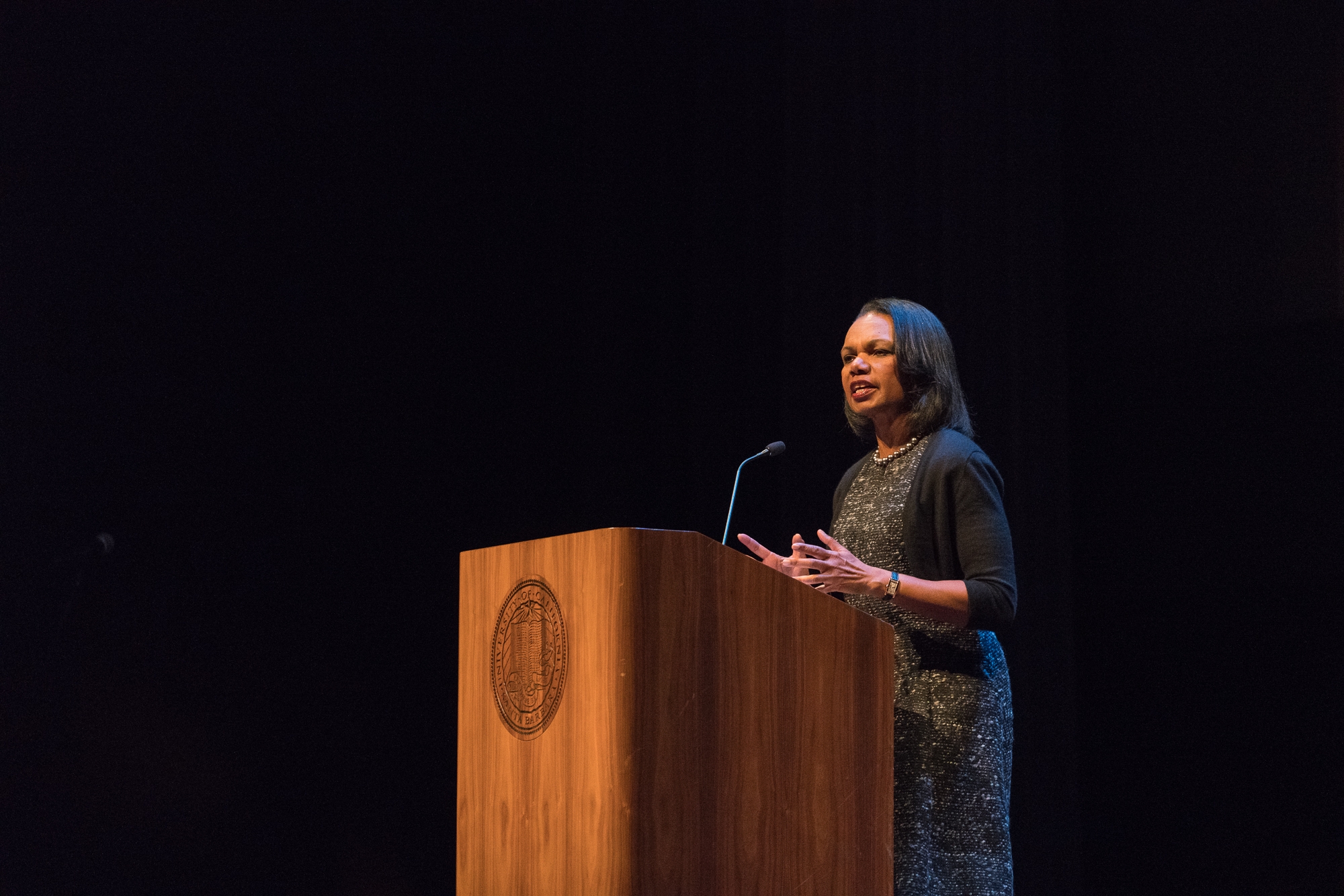 Rice is a controversial figure due to her role in the buildup to the 2003 invasion of Iraq while working under the Bush administration. Critics accuse her of advocating for the war, despite doubts about the credibility of the intelligence regarding the building of weapons of mass destruction by Iraq’s dictator Saddam Hussein.

This dissension caused the debut of a protest group called the Santa Barbara Anti War Collective.
Members of the newly formed organization greeted attendees with chants such as “Lock her up” and “Arrest the war criminal.”

While Rice avoided the topic of the demonstrators, she made an effort to justify her decisions in the 2003 invasion.

Rice explained that Iraq was difficult to predict. As the National Security Advisor at the time, she believed that data concluded that Saddam Hussein was working toward weapons of mass destruction.
Though the invasion showed this presumption was incorrect, Rice felt she had reacted appropriately under the precarious circumstances.

Despite this argument, demonstrators continued to voice their disapproval.

“I’m upset that they’re bringing in Condi Rice to speak at UCSB as if she was a legitimate authority on anything,” Howard Winant, UCSB professor of sociology, said. “She used her academic credentials to manipulate and murder and torture and commit war crimes.”

Cara Yoshizumi, one of the founders of the Santa Barbara Anti War Collective, protested due to a more general anti-war sentiment.

“So much of our country’s resources go into war and killing and environmental destruction,” Yoshizumi said. “The U.S. is an advanced and rich country, and yet we don’t have things like free education and free health care, like most advanced countries do. All of that is because of misplaced priorities, like the war in Iraq.”

Some of the audience attended not in support, but instead to critique and gain perspective on Rice.
“We are not here in support of her, we just want an abstract of what she’s about,” audience member Jeff Smith said.

“She was definitely a part of it… she’s guilty,” Smith said.

Inside, Rice talked identity politics, criticizing Donald Trump’s “America First” slogan.
She contested that a “confident country” is focused on an international level of “larger good,” not just the success of Americans. Rice defined this as spreading democracy and balancing trade.

In her Q&A session, Rice voiced support for the Black Lives Matter movement, but referred to kneeling for the National Anthem as divisive symbolism.

The self-proclaimed feminist also criticized the #MeToo movement. She said that though she overall supported and praised the purpose it served, she warned against oversensitivity of followers.

Rice voiced concern that young women wouldn’t be equipped for the real world, stating she hoped the movement didn’t teach that “women can’t take care of themselves, because they can.”

On immigration policy, Rice took a positive approach, stating, “immigration has been the lifeblood of this country.”

Rice reproached Trump’s decision to build a wall between the Mexico and United States border, stating that “a wall doesn’t have to be a physical thing.”

She backed this argument by claiming that net immigration from Mexico is zero. Rice said that Central America is the source of criminal immigrants, making the wall ineffective.

Though Rice called the past year’s number of 40,000 refugees under the Trump administration lacking, she did suggest capping the number at 70,000.

She broke down the modern system for integrating immigrants through private charities. She explained that a number above 70,000 would be too strenuous on the system, potentially causing it to collapse.

Despite protests and critics, a large number of attendees showed support for Rice by reflecting on her accomplishments.

“Her education, she was a pianist, she was considered to be a position in the football commission, and she’s a woman… this shows she’s a well-rounded leadership type,” Santa Barbara resident Grace Johnson said.

“I’m upset that they’re bringing in Condi Rice to speak at UCSB as if she was a legitimate authority on anything,” Howard Winant, UCSB professor of sociology. Thanks Howard. How’s your fake pseudo-science going for you? Looks like you went to UCSC eh? Go Banana slugs??? Aside from, you know, actually doing something with her life and serving in some of the highest levels of government — in other words, getting outside of Academia — the woman did her post-grad at Notre Dame and spent significant time at Stanford as a student. She has returned to Stanford, where she is… Read more »

Anonymous. I have no particular stake in debate about the scientific merits of behavioral sciences.

That said, how dense are you to take issue with the “pseudo scientific” nature of sociology in a post in support of the academic credentials of a person whose undergraduate and graduate degrees are both in the discipline political “science” (sic)?