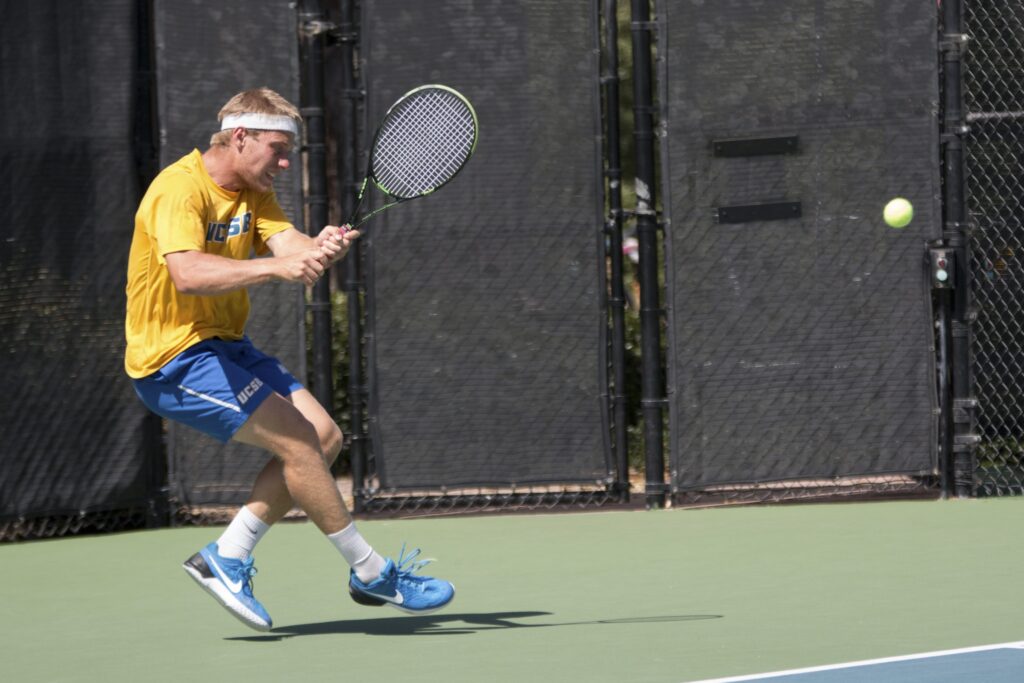 The UCSB men’s tennis started the season strong over the weekend at the ITA kick-off championship classic, blanking SMU 4-0 Friday before losing a hard-fought match against 5th ranked USC on Saturday, 6-1.

The Gauchos came storming out of the gate against the Mustangs on Friday, easily clinching the doubles point to start the match. Juniors Nicolas Moreno De Alboron and Anders Holm, the No.44 ranked doubles duo in the country, defeated SMU’s top doubles pair, Tomas Vaise and Jan-Simon Vrbsky, 6-3.

Santa Barbara then clinched the point by having senior Simon Freund and redshirt freshman Joseph Rotherman win their set, 7-5, after clinching the tiebreaker point.

With the momentum on their side, the Gauchos slammed the door on SMU in singles play, aided in large part by the play of the newcomers to the team.

Guillin won the first set 6-2, and clinched the victory when his opponent retired because of injury. Krustev, who just joined the team a handful of weeks ago, won his match in straight sets, 6-2,6-2.

“Our ability to ‘put the hammer down’ after taking leads in the singles matches was the most satisfying aspect of the win over SMU,” Head Coach Marty Davis said. “We were ruthlessly efficient in the second sets of those matches.”

While the rest of the matches were suspended after Krustev’s victory, fellow newcomer Hironori Koyanagi put together a strong match in his Gaucho debut. Koyanagi won his first set 6-2, and was dominating the second set 5-1 when the match got called.

After their dominant victory over SMU, who dropped to 1-4 on the season, UCSB awaited to see who their opponent would be in their match Saturday. That wait that didn’t last for long, however,  as perennial powerhouse USC defeated Indiana, 6-1.

The Gauchos knew they would have their work cut out for them in their second match of the season. Because the tournament was held at USC, they would be forced to play a de-facto road game against one of the top teams in the nation.

“We need to eliminate mental errors in doubles,” Davis said. “We also need to work on second serve strength, accuracy, and consistency.”

Despite the loss of the doubles point, the duo of Krustev and Guillen displayed a myriad of potential; when the match was called, they were tied 5-5.

In fact, Krustev continued to impress, earning the only point in the match for the Gauchos by winning his singles match in two sets, 6-3, 7-6.

Another standout performance came from Moreno de Alboron; despite his loss, he was able to win the second set against Holt, who is ranked No.11 in the nation for singles.

“We showed traditional Gaucho grit and toughness [today],” Davis said. “Nic dove for balls on concrete … that hurts … and he did it a few times.  Joe Guillin played with a injured finger from a tumble yesterday and all the guys fought their butts off.  I was super pleased with the effort and fight the guys showed.”

But despite this effort, the Trojans ultimately overmatched the Gauchos, and were able to win the match 6-1.

UCSB now sits at 1-1 after splitting their games in the ITA kick-off championship classic, and head back to Santa Barbara for their first home match of the season against San Diego State this Friday.