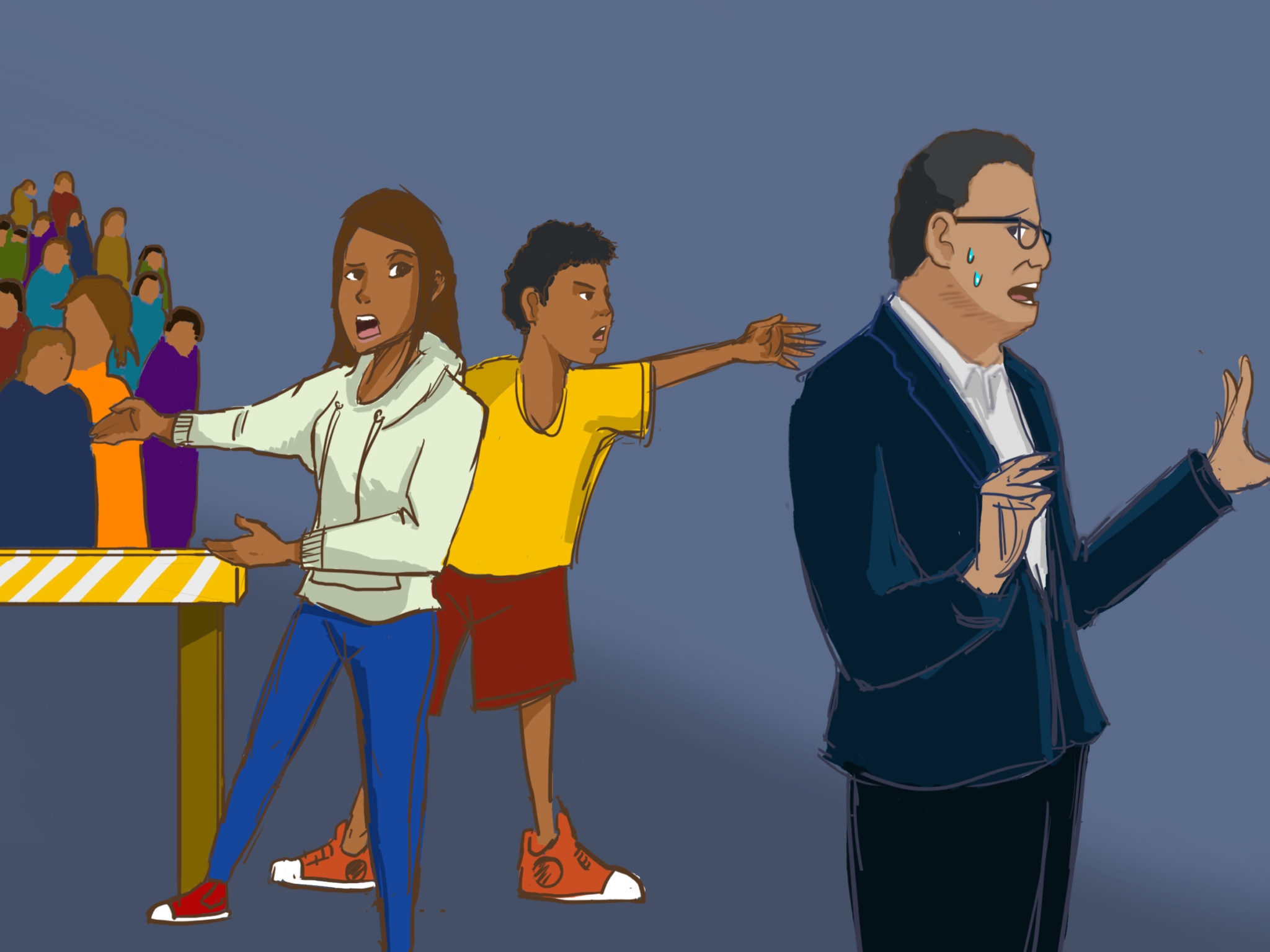 We need to hold elected officials accountable to the promises they make to students, especially when we get them elected.

Last week, Congressman Salud Carbajal voted Yes on H.R. 195, which continued funding until Feb. 19 to avoid a government shutdown, without any mention of protection for recipients of the Deferred Action for Childhood Arrivals (DACA) program. Only six democrats, including Congressman Carbajal, sided with the House republicans to pass the spending bill, and it failed to make it through the Senate. The country was left with the second government shutdown of the decade, and we still do not have a long term solution for Dreamers.

Congressman Carbajal won over 10,000 votes in Isla Vista with college affordability, environmentalism and comprehensive immigration reform as his key legislative priorities. After his win, the congressman returned to UCSB multiple times reiterating his commitments to protect DACA and the immigrant community in his district. Despite his record of cosponsoring proposals to address DACA, the congressman failed to continue his support when nearly all of his fellow democrats did so by voting no on the short term spending bill without a solution to the expiration of DACA.

Over 2,000 DACA recipients will lose their status by Feb. 8 while waiting for Congress to take action.

In fairness, the situation is politically complicated. Congressman Carbajal released a statement explaining that his vote against the government shutdown was to ensure the Central Coast would have access to full FEMA resources in light of the damage done by the Thomas Fire and Montecito Mudslide. He stated, “My office was in communication with these agencies ahead of the vote and they could not guarantee how long-term recovery projects would be handled during a shutdown. In light of this unprecedented and deadly natural disaster, I could not in good conscience vote to allow a shutdown when the full force of federal resources are needed on the Central Coast.”

Amy B. Wang of The Washington Post reported that “[m]ore than 3,000 of FEMA’s estimated 15,815 onboard employees would be suspended in the event of a government shutdown, according to the Homeland Security Department’s contingency plan for a lapse in appropriations.” However, in the 2013 government shutdown, the agency furloughed only those deemed to be nonessential or those not directly involved with on-the-ground relief efforts.

There is no doubt that the damages to our community by both the Thomas Fire and the Montecito mudslide are devastating, and I hope that the Central Coast comes together to heal from these tragedies. But the fact remains that over 800,000 people will be without the ability to work and live in this nation come March 5. Over 2,000 DACA recipients will lose their status by Feb. 8 while waiting for Congress to take action. We need to call on both democrats and republicans to take action so DACA recipients are able to work, attend classes and succeed in this country without fear or uncertainty. Furthermore, it is imperative that Congress enacts comprehensive immigration reform so both DACA students and their loved ones may live without fear of deportation or detainment. Although I can comprehend how the congressman ultimately reached his decision, I am disappointed that he turned his back on students, progressive voters and, most importantly, the undocumented community and their allies.

In this tumultuous political climate, an increasing number of young eyes watch the events unfold in Washington, D.C. with disbelief and disdain.

Those standing by his vote to avoid the government shutdown might list various legislation Congressman Carbajal has introduced or cosponsored benefiting students, but nothing can be said to adequately justify his vote on H.R. 195. A legislator’s voting record is everything; it is the only way they can stand by their word. I am calling on fellow democrats, both students and community members, to hold Congressman Carbajal accountable to his campaign promises and to avoid following politicians simply because they align with your political party. If we are not critical of our elected representatives, we lose leverage and gain a reputation of being easy votes.

In short, the congressman may find a lukewarm reception from students during his next campus visit. It is a matter of trust. Despite delivering 84 percent of the votes in Isla Vista to him, Congressman Carbajal did not take student voices and priorities seriously enough when making his decision. In this tumultuous political climate, an increasing number of young eyes watch the events unfold in Washington, D.C. with disbelief and disdain. Siding with the GOP majority to cast the interests of marginalized groups aside further contributes to proving the assumption that politicians do not care about us.

One faulty vote does not render meaningless the actions the congressman has taken on behalf of students. However, it does shatter the fragile trust between legislator and voter. To regain it, Congressman Carbajal needs not just to show sympathy for undocumented people, but demonstrate tangible efforts behind otherwise empty rhetoric. For example, a donation to the UCSB Dream Scholar Resource Fund and a written commitment to host a fundraiser with proceeds going to an organization assisting all undocumented immigrants, especially for those who do not qualify for DACA or AB-540. We need to see Congressman Carbajal at the forefront, demanding that his colleagues in both the House and the Senate pass legislation to protect DACA recipients before the program expires. Furthermore, students need to be able to convey our concerns about his vote on H.R. 195 to Congressman Carbajal in person. Very few students, especially those belonging to marginalized and undocumented communities, have the privilege or access to meet with the congressman directly, much less hold him accountable with their vote. Therefore, I am extending an invitation to the congressman to host a town hall at UCSB this quarter where he can answer directly to the students.

As Congressman Carbajal faces his constituents in midterm elections this year, I urge each and every student to hold him and our other elected representatives to higher standards than this and demand to see our priorities carried out at all levels of government. We need to call for strong stances on immigration from the congressman, his colleagues and every individual that represents students.

Kristin Hsu wants to emphasize the importance of elected officials to be in dialogue with those individuals that they represent.

I 100% agree we should hold our Congressman accountable and that the Dreamers/DACA legislation needs to be a top priority. That being said, I think Salud Carbajal’s position can be justified despite you saying it can’t ” but nothing can be said to adequately justify his vote on H.R. 195…” since you spent several lines explaining why you understand where he is coming from. I think we should continue to make it known that DACA needs to be a priority and I think it would be unacceptable for him to vote for the CR bill again, but I also think… Read more »

Salud no longer represents the progressives of Isla Vista. If you walk or volunteer on his campaign you are an enemy of Dreamers.

I’m so confused, is there a situation in which he could have both provided the necessary relief funding for Californians (many of whom lost family members in the literal sense, not the leaving the country sense, and there is a difference) and helped the dreamers? I don’t see that as possible. It seems your argument is “yeah okay so he helped his DIRECT CONSTITUENTS many of whom are not only homeless but have literally LOST family/friends with his vote to try and provide aid but he didnt think about this other group of people who are not in as immediate… Read more »

Governing effectively means balancing priorities, rather than picking one and ignoring all others. Rep. Carbajal appears to have recognized that the shutdown was imminent and would threaten many of his constituents–people’s who needed federal support to get their roads open, their power running, and to recover from an extraordinary disaster; and they ended it today. Voting to keep the Government open till February 19 still left time AND pressure to work on DACA which has a slightly longer deadline. That doesn’t mean DACA isn’t a priority. I think one of major problems the U.S. faces is a sole-focus on single… Read more »

Wow. The DN is Always good for a laugh.

I love your article Kristen! thank you for this!

Guess you all better hope the Democrats take the offer on the table and the kiddies can get legal and even citizenship as offered by President Trump!

Who know? Your best friend is a Republican!