The NFL’s Divisional Playoff round has now concluded, and talk about a weekend of upset performances. First on Saturday, the Eagles hosted the Falcons in a cold winter night matchup at Lincoln Financial Field.

As the No. 1 seed, they were the first team in NFL Divisional round history to also be considered the underdog; they went on to beat the Falcons 15-10. For the Steelers, top football analysts were already beginning to write headlines for a likely AFC Championship game versus the Patriots; they ended up conceding a total of 45 points to the Jaguars and exited the playoffs.

And don’t even get us started on that instant classic of a game between the Vikings and Saints. Altogether, it was a breathtaking week for football. So here are some awards to help us look back on such a special round of the NFL Divisional Playoffs.

1) The One and Done Award: Nick Foles’ Haters

With Carson Wentz out for the season after injuring his ACL in a Week 14 matchup versus the Rams, many people projected the Eagles to lose their first playoff game. Keep in mind that the Eagles also boasted a first round bye week since they finished the regular season as the No. 1 seed. Nevertheless, score predictions were very much in favor of the Falcons early on.

Enter Nick Foles, the main reason why postseason expectations weren’t high for Philadelphia. Being only a stand in replacement for the franchise’s future of Wentz, Foles was hired in hopes of keeping the hype rolling, and that he did. The Eagles went on to win their Divisional playoff match against the Falcons in nail biting fashion, and the rest was history. To summarize, enjoy Chris Long wearing an underdog mask in this article’s thumbnail.

A no longer existent run-game, safety Keanu Neal turning bouncing an almost certain interception off his knee back into the receivers hands for a 20 yard gain to setup a before the half field goal, and a Julio Jones slip up leading to a missed clutch catch opportunity to win the game; these were just a few of the many other things that went wrong for the Falcons during their game versus the Eagles.

This game was just riddled with mistakes from both sides, yet Falcons just couldn’t seem to capitalize whenever they were gifted the chance to. The Falcons were also recently lauded as a dominant team that might just make it all the way to the Super Bowl again. Sadly, per Georgia football tradition, they blew it. This year is just not your year Falcons and Bulldogs fans, good news is a lot of good karma should now be stacked and headed your way very soon…hopefully.

This isn’t a full on jab at the Tennessee Titans, considering they upset the Kansas City Chiefs by coming back from a 21-3 deficit. Rather, this one goes out to head coach Mike Mularkey who got the job done well enough in order to keep said job.

Rumors were stirring before the Chiefs game that the Titans would be observing other possible head coach candidates in case things didn’t pan out in the playoffs.

After such a stellar performance, Mularkey managed to quiet his critics and retain his leadership position heading into next season. Regardless, their divisional playoff performance was a pretty abysmal 14-35 loss in Foxborough against the Patriots. Still, there’s plenty to look forward to next year with Mariota’s progression, a defense that’s still forming its identity, and a familiar coaching staff that helped a losing franchise turn it around all the way to the playoffs. 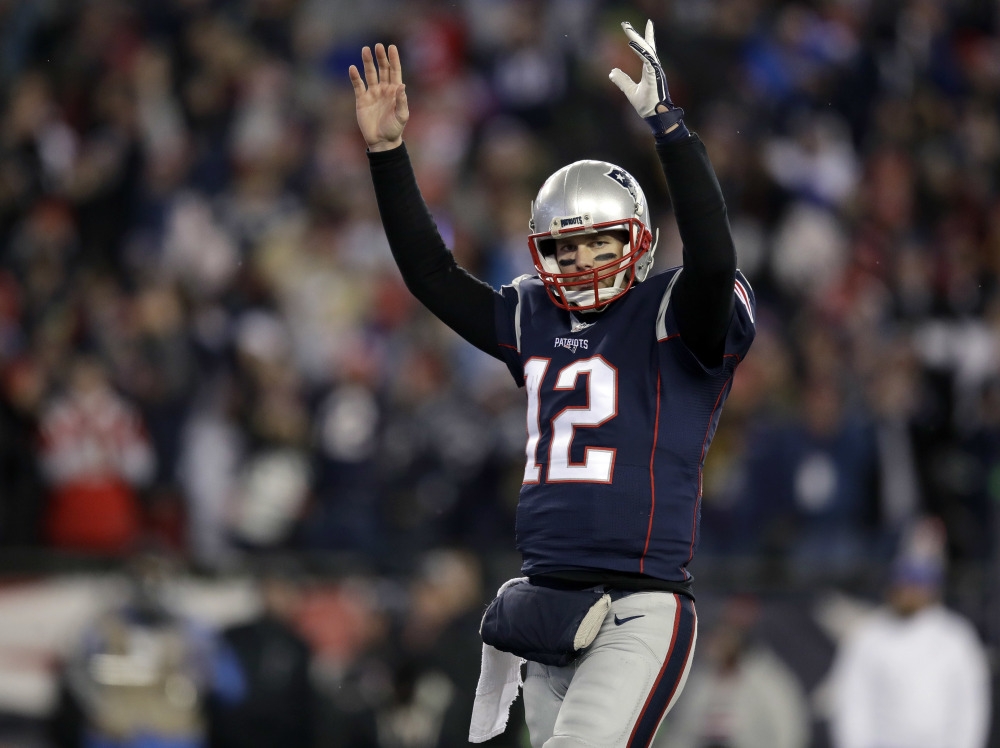 Courtesy of the The Portland Press Herald

Play action dots for first down, 60 yard deep throws, and that pass to Amendola from the right hash to the left while falling down, just wow. Tom Brady looked in fine form against the Titans and his age has appeared to be a non factor for yet another postseason.

Rob Gronkowski, who missed last year’s entire playoffs due to injury, also made his return to postseason football as he helped Brady reach his mark of 337 yards and 3 touchdowns against the Titans. Last year it was the Julian Edelman show, but this year the elite duo of Brady and Gronkowski will continue to prove to be one of the best as well as essential to the Patriots’ repeat Super Bowl aspirations.

What can be said? Blake Bortles went out there Sunday morning and got the job done almost flawlessly. Add in a remarkable rookie postseason performance and you get yourself a Divisional playoff win on the road against the Steelers.

Easier said than done, but this one was a high scoring 45-42 game for the fans “By Jove, I think he’s got it! It’s been 4 seasons putting up with Bortles but I think he’s got it,” – most likely yelled by a Jaguars fan somewhere in Jacksonville.

6) The Steelers Can Still Play the Patriots Award: Madden NFL 18

This was mostly a reference to the Jaguar’s Twitter account, which was honestly on fire all day following their divisional playoff win. Truth be told, most people were already envisioning an AFC Championship matchup between Pittsburgh and New England; until the Jaguars had something to say about it.

Leaving no analyst’s cold take unpunished, the Jaguars even responded to Mike Mitchell’s hubristic response: “we can play [the Patriots] in hell, we can play them in Haiti, we can play them in New England and we’re gonna win”, by letting him know that their premature exit has granted him an offseason full of football video gaming distraction.

7) The Game of the Season Award: Minnesota Vikings vs. New Orleans Saints

The gritty Minnesota defense and the high octane New Orleans offense, this NFC Divisional matchup was definitely the game of the season so far. Following a missed field goal at the half, the Saints were set up with a 17-0 deficit that had fellow internet pundits exclaiming that it was all over since the opponent boasted the best defense in the entire National Football League. Little did they know, yet they still chose to ignore, was that Drew Brees was at the helm of the New Orleans comeback. 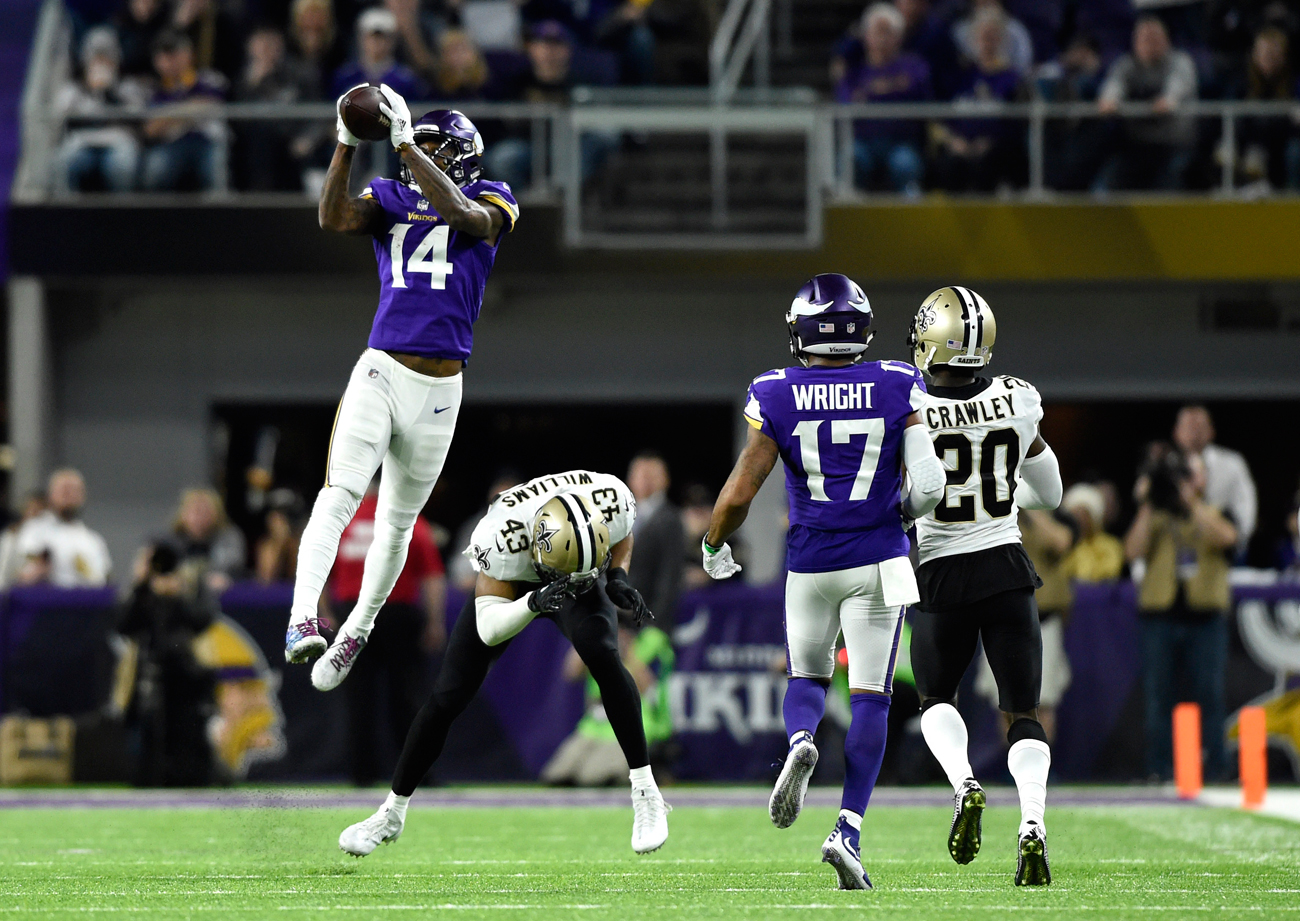 And comeback they did as by the final two minutes of the 4th quarter had the Saints up 21-20 over the Vikings; then what followed was what truly turned this game into a classic. The 4th quarter experienced 4 different lead changes and the entire match was resolved within the last play. With time almost up, the Vikings needed only a field goal to secure their slot in the NFC Championship. The odds were heavily in favor of a Saints victory, but then the unthinkable happened. Stefon Diggs caught a 60-yard touchdown after leaving his safety coverage in the dust, and ran into the end zone as the seconds ran down. It was madness in the U.S. Bank Stadium, and this game will surely be one we’ll all remember for a very long time.

Now I know what you’re thinking: Jeff Fisher, really? Really. Sure his exit from the Rams was not pristine, but guess who he coached simultaneously and are both now in the NFC Championship game: Case Keenum and Nick Foles. Oh, and Jared Goff reached the Wild Card round too. Many not so great things have been said about Fisher over the years, but one thing is for certain; he truly has an adept eye for hidden quarterback talent.