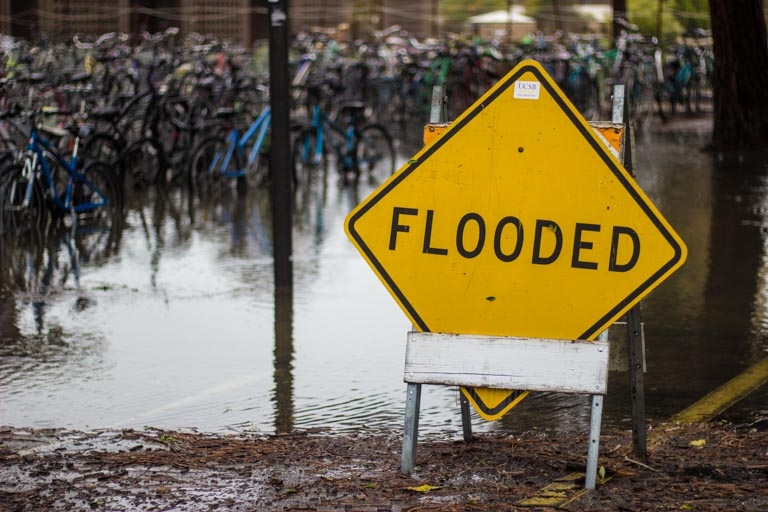 Six inches of running water can knock a person off their feet, while a foot of water can sweep away a car. Jose Arturo Ochoa / Daily Nexus

Mandatory evacuation orders have been issued for parts of Santa Barbara County as an approaching winter storm could cause flooding in areas recently burned by the Thomas Fire.

Isla Vista is currently unaffected by these evacuations, though residents in areas north and south of I.V. were issued mandatory evacuations. Residents are encouraged to evacuate no later than noon on Monday.

The loss of vegetation due to the Thomas Fire, as well as last year’s Whittier, Sherpa and Rey fires, increases the risk of flash flooding and debris. Without vegetation, rain that would generally cause very little runoff could instead result in erosion and dangerous flooding.

Vegetation can take years to grow back following wildfires.

According to the Department of Homeland Security’s Ready campaign, six inches of running water can knock a person off their feet, while a foot of water can sweep away a car.

The National Weather Service also issued a Wind Watch, as winds with speeds higher than 58 miles per hour are expected in the area. High winds can lead to fallen trees or power lines, which may result in damages to infrastructure or power outages.

According to the National Weather Forecast, precipitation rates could be above half an inch per hour during the peak of the storm.

The storm is expected to clear by Wednesday, which is predicted to be partly sunny and around 65 degrees.

Authorities are urging citizens to remain alert and evacuate if necessary.

The map below shows the county-issued evacuation zones.

A message from the Office of Emergency Management warns residents in evacuation zones that they “could be stranded” if they choose to stay in these areas.

The Office of Emergency Management regularly updates its emergency information on the Santa Barbara County website.

Westmont College has cancelled classes from Tuesday, Jan. 9, until Friday Jan. 12, due to “significantly compromised water service” caused by flood damage in Montecito, according to a campus alert. Campus officials are attempting to evacuate students by noon on Jan. 10.