The Daily Nexus
Sports
UCSB End Non-Conf. Portion of Season in Winning Fashion
January 1, 2018 at 12:37 am by Spencer Ault 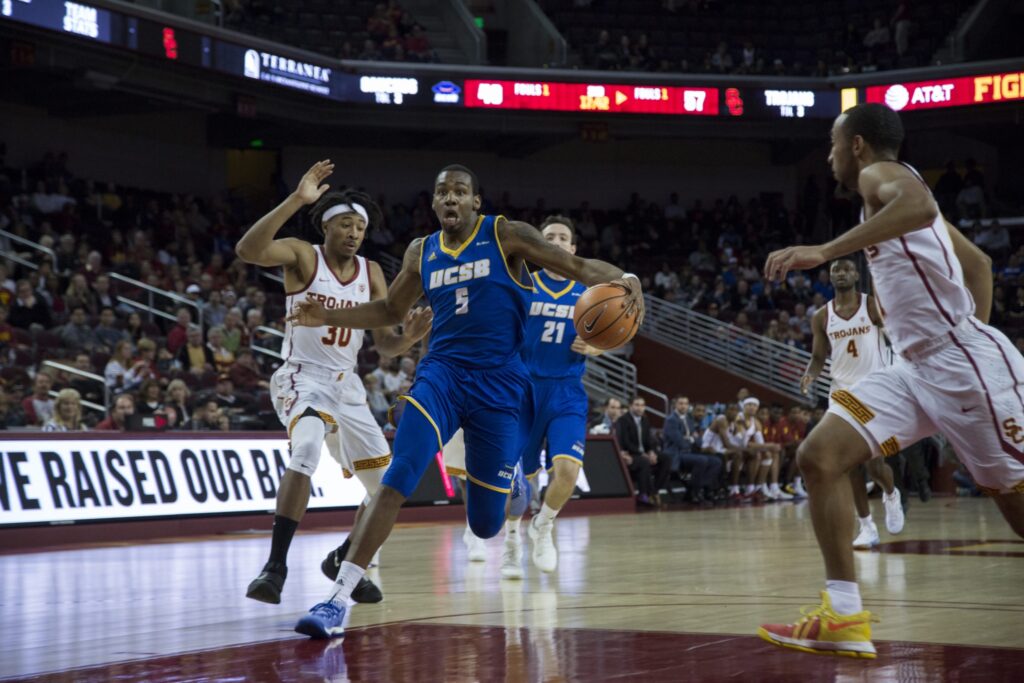 After breaking through the defense, Jalen Canty prepares to shoot. Dustin Harris/Daily Nexus

Playing in its final non-conference game before the opening of Big West play, the UCSB men’s basketball team didn’t waste any time against Pacific Union in the Thunderdome on Saturday night.

The Gauchos jumped out to a big early lead and held strong through all 40 minutes of action, ultimately coasting to an 81-49 blowout win over the Pioneers.

Saturday’s victory capped a successful non-conference schedule for UCSB. Only a year removed from going 2-10 in non-conference play, the Gauchos are 11-3 so far this year.

Those three losses came at the hands of USC, No. 11 Texas A&M and Pitt, all Power Five teams.

UCSB more than held its own in all three of those losses, falling by an average margin of about 13 points.

When they weren’t taking on some of the best teams in the country, the Gauchos took care of business with their 11 wins in their best non-conference performance in at least a decade, and enter Big West play on a three-game win streak.

The third win in that streak came on Saturday night against Pacific Union, an NAIA school with a 2-7 record this season. It was clear immediately that the Pioneers didn’t stand much of a chance of pulling off the upset.

The Gauchos held a 21-10 lead just ten minutes into the game, and managed to open up that advantage to 36-18 by halftime. Sophomore guard Max Heidegger led the Gaucho offense with 11 points in those first twenty minutes despite an uncharacteristically poor shooting performance, going 5-12 from the field and 1-5 from three in the first half.

Much of UCSB’s first half dominance can be attributed to its mastery of the boards. The Gauchos pulled down 36 first half rebounds to Pacific Union’s 15, with graduate transfer Leland King II leading the way with 11 rebounds in the first half for UCSB.

Senior forward Jalen Canty and sophomore guard Christian Terrell also got in on the rebound party, as both players grabbed seven boards in the first 20 minutes. Prior to Saturday’s game, Terrell’s season high for rebounds was seven, set back on Dec. 5 against Nebraska-Omaha.

None of the Gauchos’ first-half starters played more than five minutes in the second half, but that doesn’t mean the hosts took their feet off the gas pedal. UCSB scored 45 points in the second half alone, and saw every player that entered the game score.

J.D. Slajchert was one of those players, and the junior forward made the most of his season-high 10 minutes of play. Slajchert scored a season-best six points on 2-for-5 shooting, and knocked down one free throw.

Overall, the Gauchos had nine players finish with at least five points, a balanced offensive attack that was key to their second-half scoring efforts. Heidegger’s 16 points led the way, but King II and Canty weren’t far behind with 10 each, as both players posted a double-double on the night as well.

Jayson Marquez was Pacific Union’s only player in double-digit points Saturday night, although Rae Hubbard finished one point shy with nine points. Forward Noel Briones led all Pioneers with nine rebounds, third-best across both teams, but a 1-7 night from the field limited him to just two points.

UCSB will attempt to stretch its three-game win streak out a bit more as it enters Big West play on Thursday, Jan. 4 at Cal Poly. The Mustangs are 5-9 on the season, but have a strong 85-82 loss to Cal on their resume.

The Gauchos take Cal Poly on Thursday night at 7:00 pm.