The Daily Nexus
Science & Tech
The Year A Bike Path Was Opened Again
December 14, 2017 at 3:28 pm by Stephanie Pernett

Of the buildings that were completed in 2017, the most anticipated one was the Center for BioEngineering (CBE) building.

This anticipation is not only due to the fact that it is a three-story, 48,000-square-foot building, which has been designed to LEED silver standards and includes faculty and graduate student offices, research labs, administrative offices and a 100-seat auditorium, but also because the bike path that leads to the buildings behind the library had been blocked during construction.

Before the opening of the CBE, anyone who had class in Broida, Webb or Noble Hall had two options: Ride your bike through the hallway in Noble Hall and risk getting a ticket, or walk your bike. Let’s face it, the second option was the only option unless you wanted to risk paying for the consequences.

Originally scheduled to open in 2014, the CBE held its ribbon-cutting ceremony and reception on Oct. 19, 2017. Proposed by Frank Doyle, associate dean of research in the College of Engineering, the CBE was approved in 2011 with plans to start construction in 2012.

The Center was constructed with the idea that it would become a locus of research and teaching –– at the interface of biology, engineering and physical sciences –– that is already producing results that benefit industry and medicine. Research at the CBE is yielding important advances in the understanding, diagnosis and treatment of common and devastating diseases such as cancer, diabetes, Alzheimer’s and macular degeneration. 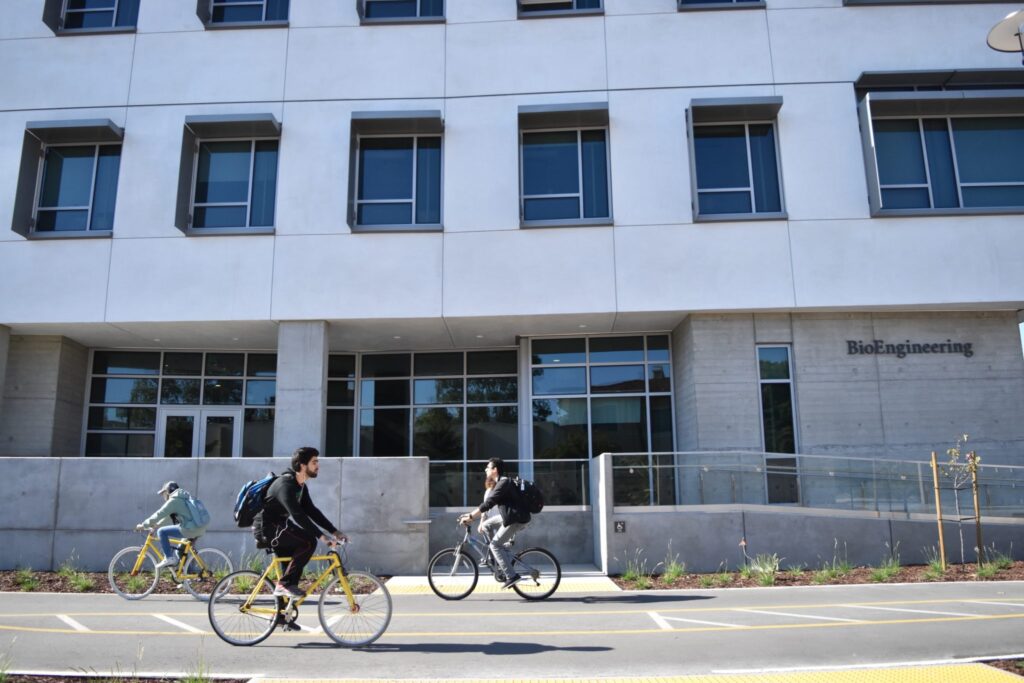 The Center for BioEngineering is now housed in the new, state-of-the-art BioEngineering Building. The three-storey, 48,000-square-foot building, which has been designed to LEED silver standards, includes faculty and graduate student offices, research labs, administrative offices and a 100-seat auditorium. / Jenny Luo

Advancing new academic initiatives is a primary goal for CBE, such as the approved graduate emphasis in bioengineering for Ph.D. students in 13 participating departments across campus. Currently under campus review is a new degree program in bioengineering leading to a Bachelor of Science degree in bioengineering.

All of this contributes to UCSB’s reputation as a world-renowned research institute, but you tend to forget this, especially during the moments when you had to carry your bike through the space between Webb and the fence construction workers put up because some parts of the road were flooded.

Bike riders, from the moment they started on the path by the Psych building, knew it would be a little bit of a challenge with other students walking and biking. An added obstacle would be the construction trucks that would pass by occasionally.

It was a real-life Crossy Road.

In the days after Oct. 19, when the bike path behind the library was opened, students gained a new appreciation for it. Its purpose as a link between two different sides of campus was reestablished. Its closure brought frustration, but its reopening brought joy and appreciation.