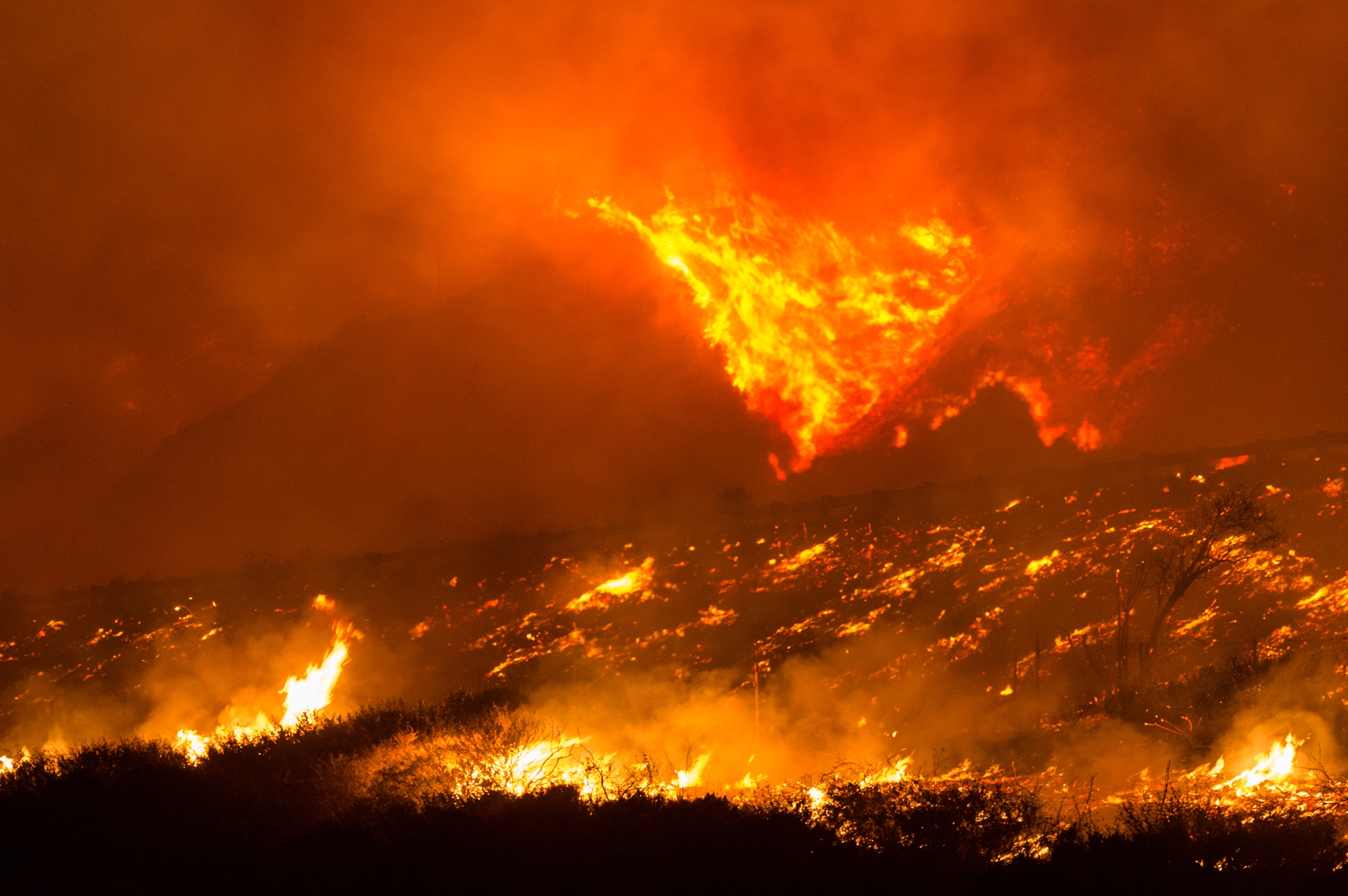 Flames from the Thomas Fire consume the hillside next to US Highway 101 north of Ventura on Tuesday. Courtesy Photo

UC Santa Barbara Chancellor Henry T. Yang announced that all classes would be cancelled Thursday and Friday after students expressed dissatisfaction with the university’s delayed response to the Ventura County fire. A petition to cancel classes gained 3,000 signatures in one hour.

Yang said UCSB is a “significant distance” from the Thomas Fire, but canceling classes will allow the university to determine logistical issues before finals week begins.

Yang also said the university has asked faculty to consider rescheduling final exams on Saturday. Faculty can hold the exam on Saturday, or reschedule the exam for next week.

“We are grateful to our entire campus community for their patience and understanding during this difficult time,” Yang said in an email to students. “We recognize the significant impact the fire is having on our students as we reach the end of the academic quarter.”

Ortega Dining Commons is at maximum capacity due to canceled classes. Students are lined up outside wearing masks to avoid air pollution from the #ThomasFire as they wait to enter the building. pic.twitter.com/GXoi3YHC5S

Since Monday night, the Thomas and Rye fires in Ventura and Los Angeles Counties have affected Santa Barbara County’s air quality and caused intermittent power outages in Isla Vista and on campus.

Kaela Bowens, a second-year film major, said her lecturer for an earth sciences course taught his class in the dark.

“I think that classes should have been canceled yesterday,” Bowens said. “I got there, and the power continued to go on and off.”

Other students have requested that UCSB push finals up from next week.

Bava Balakrishnan, a third-year physics major, said classes should not be cancelled but students should be allowed to finish their finals sooner and go home before the fire reaches Santa Barbara.

He said the university should not have as much of a responsibility to alert students as some have requested.

“UCSB is not obligated to inform students about the news unless it is an immediate emergency. People need to grow up and take responsibility for their own lives. We are not five years old,” Balakrishnan said in an email.

UCSB set up an on-campus emergency center for Thomas Fire at the request of Ventura County. Many students, however, believe the university is not doing enough to protect student safety.

Sophia Uemura, Associated Students (A.S.) College of Creative Studies (CCS) senator and second-year CCS chemistry major, said the university “hasn’t done much” to inform the student body about the poor air quality and was slow to send out information to students.

“UCSB [administration] should have played a bigger role in communicating to the student body on the conditions and how dangerous it is for those who have lung issues and other health issues,” Uemura said. 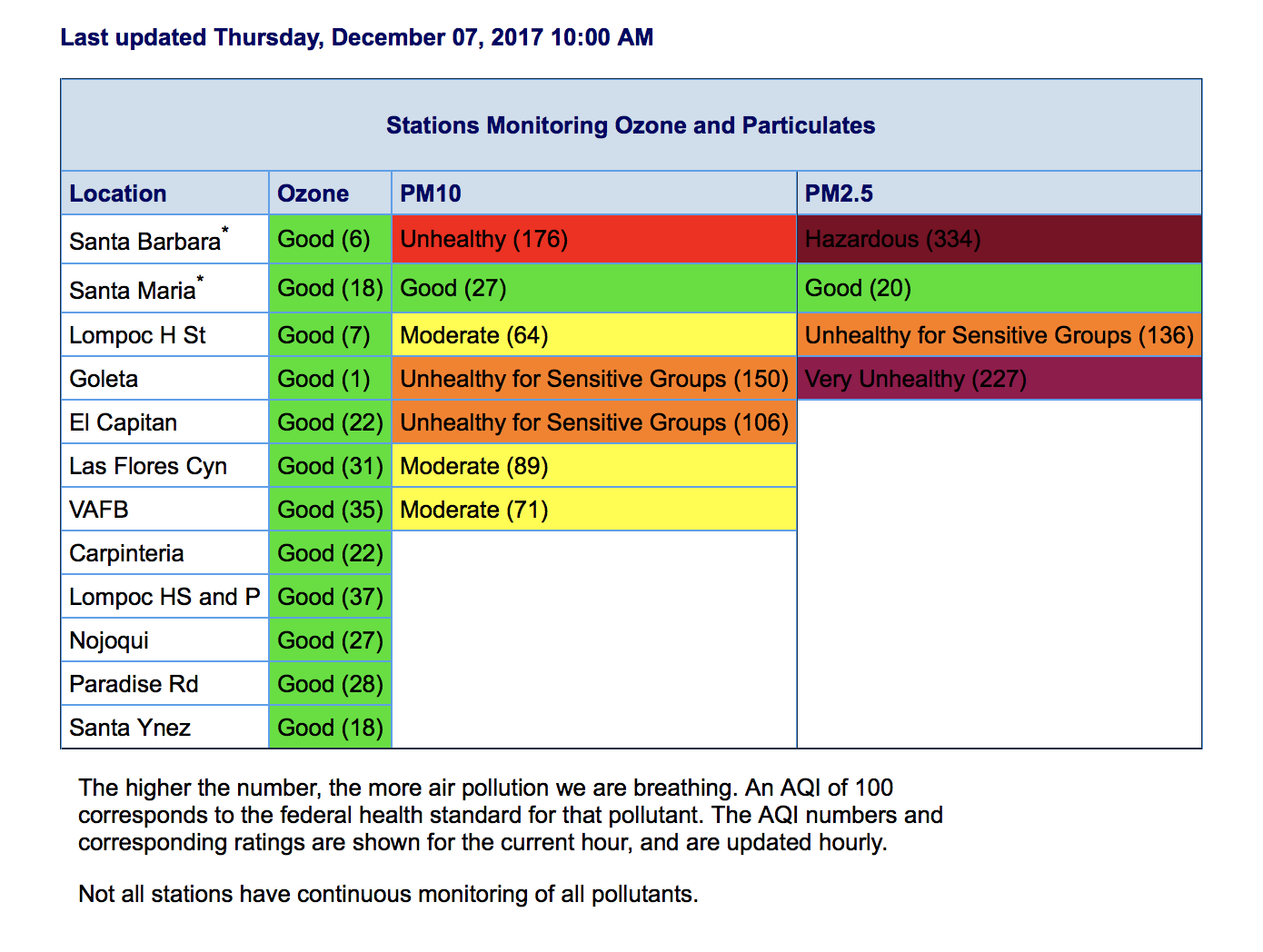 Margaret Klawunn, vice chancellor for student affairs, confirmed to students Wednesday night that the campus is open and will resume normal operations.

“[Other campuses are] closed for specific logistical reasons related to ongoing electrical outages and/or highway and road closures in and around Los Angeles,” Klawunn said in the email. “Fortunately, at this time, those are not factors that are impeding our campus operations at UCSB.”

“Our campus remains open, with classes and most other activities proceeding as scheduled, though intermittent power and communications outages have affected some services and operations,” Yang said in an email.

A.S. President Hieu Le called on Chancellor Yang to cancel classes and excuse all assignments and exams scheduled after Monday’s power outage in a letter to the chancellor. The letter was posted on Facebook Thursday morning.

“By keeping classes open, we are pressuring students into a situation where they have to decide between their short and long-term health versus their grades,” Hieu said in the letter.

Jordan, along with A.S. Senators, called on the administration to cancel classes, make work optional for university employees, send out regular updates about the air quality and distribute masks to all community members who would want one.

Elotero @HijinioCamacho is still UCSB serving students despite low air quality due to the #ThomasFire.“Cuando tengo contrato con los estudiantes tengo que venir, sea lluvia o calor,” he said. “When I have a contract with the students, I have an obligation to come, rain or shine.” pic.twitter.com/d5RVE1umk6

UCSB is offering several resources on campus in response to the fires and outages.

Klawunn said the university is providing free masks at Student Health, the Recreation Center, A.S. offices and in residences halls.

Oscar Zarate, a fifth-year political science major, said he appreciates the masks that Student Health and A.S. have provided but “more needs to be done to protect students from some of the health hazards that come with polluted air.”

According to the Santa Barbara County Air Pollution Control District, Goleta’s air quality is “very unhealthy” and Santa Barbara’s is “hazardous” as of Thursday.

Ash was also seen falling in I.V. and on campus Thursday morning.

The university is currently providing limited face masks on campus and financial aid for those affected by the fires.

On Wednesday night, only San Rafael and San Miguel residence halls were offering masks, according to the halls’ respective desk attendants.

According to Zachary Hackbarth, assistant supervisor at the Recreation Center and second-year environmental studies major, the masks they provide are 1513 N95 masks. There are approximately 500 masks available.

N95 masks filter 95 percent of particles in the air but do not provide full coverage to children and individuals with facial hair.

Masks are also available at the A.S. Ticket Office. Tatiana Cruz, a third-year environmental studies major and cashier at the ticket office, said the office has approximately 50 masks left as of Wednesday night and said 300 masks were sent to the Pardall Center in Isla Vista.

Cruz said they had 500 masks at the start of the day and will restock on Thursday.

Michael Miller, assistant vice chancellor for enrollment services, said UCSB’s Financial Crisis Response Team is working to help students that have been impacted by the fires in Ventura and Los Angeles counties.

The team was created last year to “streamline processes” for students who have been affected by disasters.

The group sent out an email Wednesday night to 1,340 students whose home zip codes are in areas that have been impacted by the fires.

“Our students are our main concern and priority,” Miller said. “We’ll be monitoring additional students that have potentially been impacted.”

Approximately 300 Carpinteria residents were evacuated at approximately 1:45 a.m. Thursday in response to the Thomas Fire, according to Kelly Hoover, spokesperson for the Santa Barbara County Sheriff’s Office.

The area had previously been issued a voluntary evacuation warning, and the Santa Barbara County Sheriff’s Office issued a notice for mandatory evacuation on Thursday morning.

If students are experiencing a short-term financial crisis as a result of the fires, they should email financialcrisis@sa.ucsb.edu and can expect a reply within 24 to 48 hours. Students who wish to talk in more detail about fire-related problems should contact Rebecca Plotkin, lead contact at Financial Crisis Response Team, at rebecca.plotkin@sa.ucsb.edu.

Miller said the process of helping students with financial aid will be a “rolling project as the fires continue to spread.” He explained students would receive varying aid depending on how they have been affected.