Donald Trump winning the presidency has created a platform for the U.S. to say that it does not believe in climate change. Although many scientists and reports say that climate change is indeed happening, there is still disagreement between over what is fact.

While political officials may openly discuss their thoughts on climate change, a UC Santa Barbara researcher and assistant professor of political science, Matto Mildenberger, led a new study that found substantial differences in the climate change views of both Republicans and Democrats across different states and congressional districts. His study has been published in the journal Climatic Change.

“While subsets of the Republican voting public do not support climate policies and hold views consistent with party elite, Republican climate and energy opinions are more varied than might be presumed from political discourse,” Mildenberger, who conducted the research with colleagues at Yale University and Utah State University, said. “Similarly, the results emphasize consistent support among Democrats for climate and energy policies, despite variation in belief intensity.”

To date, the primary barrier to models of partisan opinion distribution has been the absence of high-quality cross-tabs that measure the number of partisans with particular demographic attributes who reside in particular state and local geographies. Critically, neither the U.S. Census nor the American Community Survey (ACS) collects political orientation data. 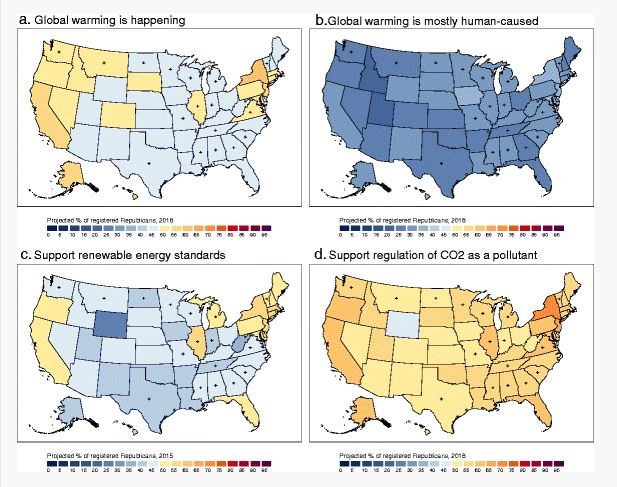 Above is the projected percent of Republicans who hold selected climate opinions and policy preferences by state. States with plus symbol do not provide party registration data; party identification in these states is modeled. / Courtesy of Climatic Change

Mildenberger and his colleagues were able to overcome this challenge by using custom-generated cross-tabs derived from analyses of state voter files that estimate the distribution of political partisans by race, gender, age and geographic location. They combined these custom cross-tabs with unique survey samples of Republican and Democratic climate and energy opinions collected by the Yale Program on Climate Change Communication and George Mason Center for Climate Change Communication between 2008 and 2016. These surveys were conducted by GfK Knowledge Networks using probability-based online samples. Survey questions are provided in supplementary material, along with question-coding details.

This combined dataset allowed them to estimate the spatial distribution of Republican and Democratic climate and energy opinions using a multilevel regression and poststratification (MRP) approach, a statistical model of parameters that vary at more than one level. MRPs are increasingly used to model spatial distributions of public opinion.

Their estimates reveal substantial heterogeneity in partisan climate and energy opinions across the U.S. For example, as much as we agree with general population models of climate opinions, there is a much larger fraction of Republicans who think that global warming is happening than those who think that it is human-caused. 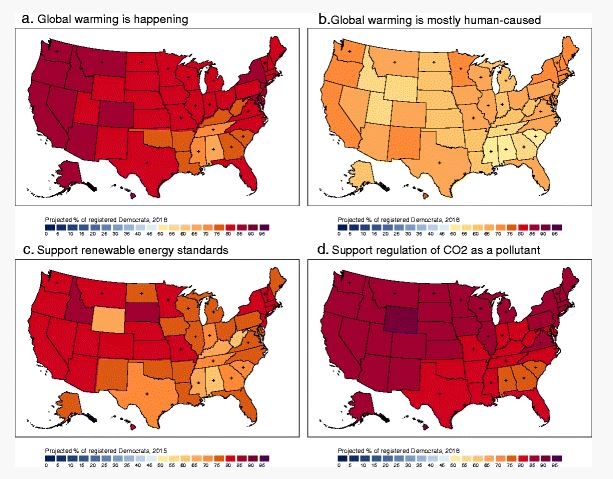 Above is the projected percent of Democrats who hold selected climate opinions and policy preferences by state. States with plus symbol do not provide party registration data; party identification in these states is modeled. / Courtesy of Climatic Change

Nonetheless, more than a quarter of Republicans in most states think that global warming is both happening and human-caused. Despite consistently high belief in climate change and support for climate reforms among Democrats, they found that the intensity of Democratic beliefs varies spatially at the state level.

The geography of partisan climate opinions in the U.S. highlighted in their study, the researchers say, should inform decision-makers, educators and communicators working at sub-national scales. Co-author Peter Howe, of Utah State University, said that an understanding of how support for climate change and energy reforms differs at local scales is especially important given the current policymaking context. Despite the Trump administration’s withdrawal from the Paris Climate Agreement in mid-2017, state and local governments continue to act as critical sites of climate and energy policymaking in the U.S.