Following a nine-hour student sit-in at Cheadle Hall against the university’s treatment of sexual violence in May, UCSB faculty met this Tuesday, Nov. 14, to revisit the status of the 12 demands made by nowUCsb. 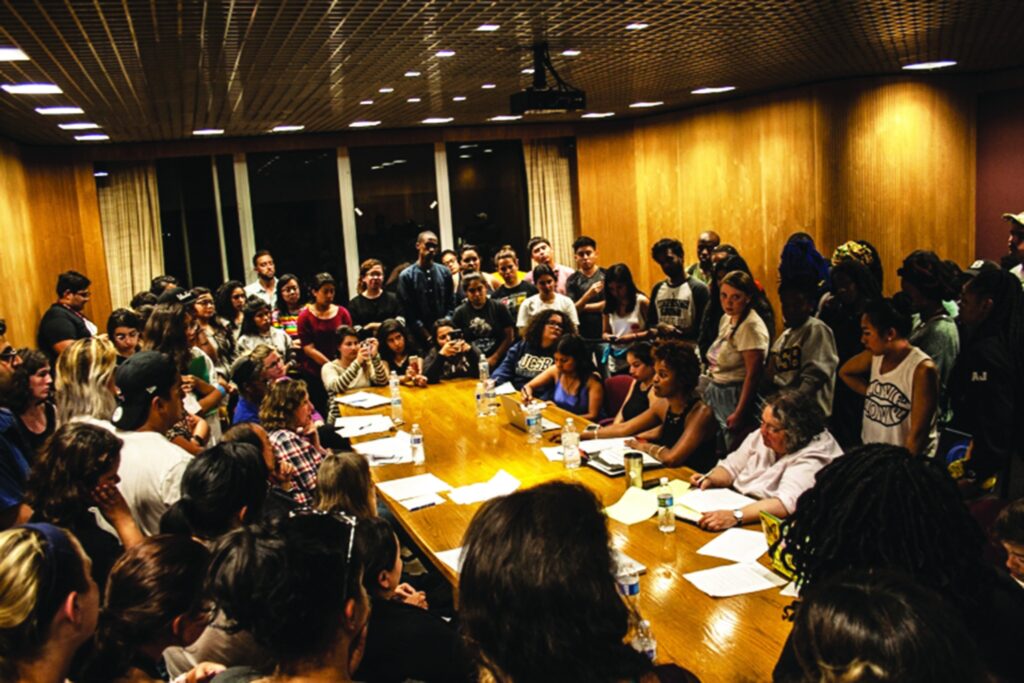 “Not enough [people] participate in the resistance against the continuation of the perpetuation of rape culture,” said Ro’Shawndra Earvin, a UCSB student and a lead speaker at May’s sit-in, as she opened the meeting with a statement expressing her continued frustration.

Earvin expressed her frustration at the university’s handling of the demands, saying Armistead failed to solicit students to join committees to comply with the demands through a university announcement.

“Ro Earvin, in unity with the A.N.W.O branch of UCSB and the Student Activist Network are looking for students interested in working on committees created for the demands signed May 4th 2017 in response to the University’s response to Sexual Assault. And for more information to contact me at r.smivsb@gmail.com with the demand(s) interested in working on and a schedule,” Earvin said in her email to UC administration.

Armistead said she misunderstood Earvin’s request and sent out an email advertising Tuesday’s town hall to all students.

Following Earvin’s opening statement, attendees received updates on each of the 12 demands made by nowUCsb, an organization which strives to “expose and reform broken campus policies on sexual violence” according to the group’s Facebook page.

The administration marked each demand as “incomplete,” “complete” or “in progress.” The panel then provided specific information on the progress of each demand.

The first demand was to create and fund a survivor resource center in Isla Vista. According to Klawunn, the university provides legal and counseling services for survivors, despite there being no “one-stop shop” for these resources. The demand was marked as incomplete, but the panel said it was interested in looking further into the matter.

The second demand, which said C.A.P.S. must provide adequate and timely mental health services to survivors and their families, was marked as in progress.

C.A.R.E. Director Conway said the organization now has eight staff members, which she described as its largest staff ever. She said C.A.P.S. has also diversified the days and times for group counseling and activities.

The third demand sought mandatory sensitivity trainings for UCPD and the I.V. Foot Patrol that address race, gender, class and sexuality in connection to sexual assault and interpersonal violence.

Klawunn said demand four, asking Santa Barbara City College to be more transparent about students who have been disciplined for Title IX violations, is complete.

The seventh demand, for survivors of sexual assault and interpersonal violence to be able to transfer to a different university, is already in practice, Klawunn said. The UC facilitates UC-to-UC transfers for survivors.

Demand 10, which required integrating Queer Connect, an educational workshop that focuses on sexual assault, dating violence and stalking within LGBTQ communities, to reporting and trainings, was also implemented and officially began at the beginning of Fall Quarter, according to Conway.

The remaining seven demands were marked incomplete, but members of the panel assured those in attendance they are working to meet them.

Demand six ordered administration to work with the I.V. CSD to create a report card for government institutions and law enforcement agencies for behaviors and education surrounding rape and sexual assault in I.V. Earvin marked that demand six has not been satisfied.

The university is unable to meet demand eight for increased lighting on Slough Road because the Coastal Commission will not approve the change in infrastructure, according to Klawunn.

Demand nine, to organize a meeting with all UC Chancellors on our UC Santa Barbara campus to develop system-wide level change, was not met “the way the demand is written,” Klawunn said.

Demand 11 asked the UC president to conduct yearly campus tours, where they should hold a public sexual violence town hall at every UC campus once per year.

Robin Holmes-Sullivan, UC vice president for student affairs, will instead hold a town hall at UCSB on Jan. 8.

Demand 12 requested Chancellor Yang and his office regularly update students about the progress being made on these demands. Klawunn said the demand was incomplete and said Tuesday’s town hall was one way to update the public.

After the panel discussed their progress on each of the 12 demands, the floor became open for the approximately 30 students present to ask questions. The panel also answered anonymously submitted questions.

Attendees asked why the UC administration has the funds for Halloween ads but not to meet the 12 demands. Others asked whether programs like Gaucho FYI and Haven are enough to combat rape culture.

The public made suggestions to the panel regarding addressing rape culture at places like the Student Leadership Retreat, where many leaders of organizations gather for training each year.

They also mentioned the newly-introduced UC Title IX Student Advisory Board and asked if the students chosen to serve on this board would be compensated for the time commitment required to be on the board.

Armistead agreed that students who serve on the board should be compensated.