The Daily Nexus
Sports Blogs
The Eagles Aren’t as Good as You Think, They’re Actually Better
November 16, 2017 at 5:01 am by Richard Benites 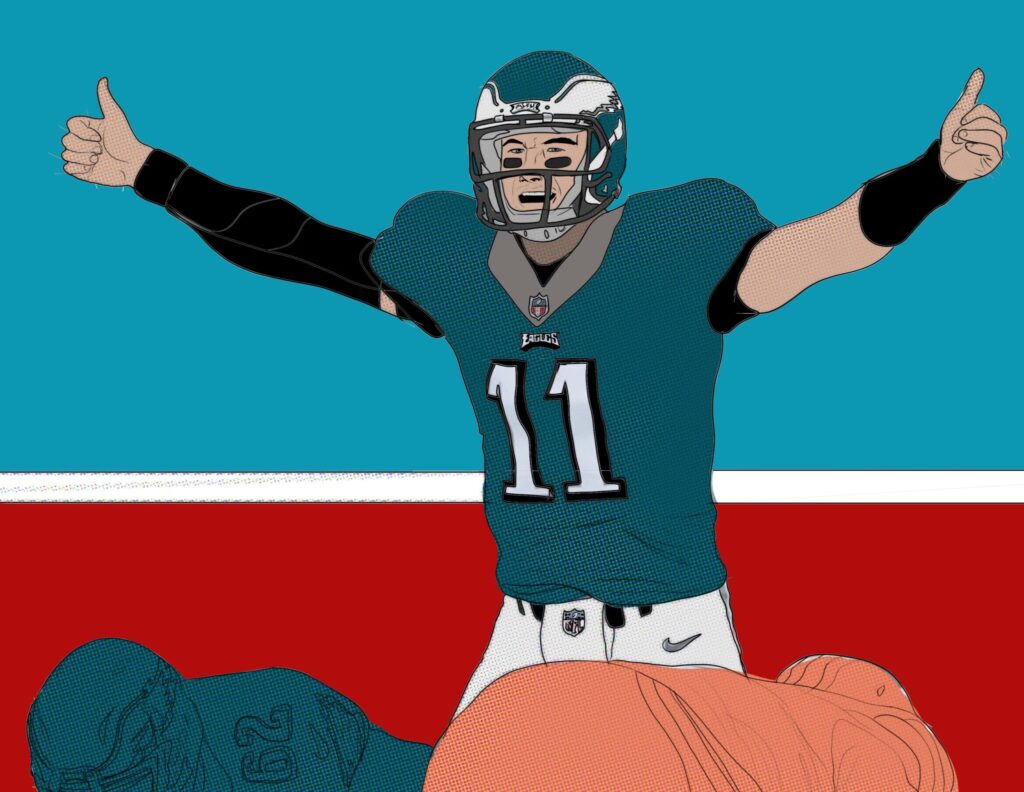 We are well past the halfway mark of the 2017 NFL season, and as Week 11 is set to begin this Thursday, this year’s playoff picture is beginning to form. As the postseason approaches, things are surely to heat up during the latter half of this season.

However, above all these surprise competitors and elite franchise teams, there’s only one clear-cut side above everyone else: the Philadelphia Eagles.

Sitting comfortably at 8-1 and coming off a bye week, the Eagles boast the best record in the league, and their schedule of opponents truly reflects the magnitude of this great feat.

To kick off the year, they were on the road for four of their first six games, not to mention a pair of divisional games that were included in this start against Washington and the New York Giants.

At the end of the six-game span, Philadelphia’s overall record stood at 5-1 even after nearly upsetting an on-fire Kansas City Chiefs team who were fresh off their season-opening destruction of the New England Patriots in Foxborough.

Add in a clutch 61-yard field goal from rookie kicker Jake Elliot in Week 3 to defeat the Giants 27-24 as well as a close affair against a then streaky Carolina Panthers side on “Thursday Night Football,” and this pretty much sums up the rollercoaster of emotions that Eagles fans have been rewarded with.

Now, coming off a 51-point blowout of the “elite” Broncos’ defense in a Week 9 win, Philadelphia now has its sights on a deep playoff run. But as any hardcore Eagles fan will tell you, don’t say Super Bowl just yet.

Injuries, and Lots of Them

Many factors come into play when analyzing the current success of this Eagles squad. However, a good place to start would be the team’s ability to overcome several injuries to very key positions.

These are just a few of the countless roadblocks that Philadelphia has had to deal with. Yet, considering they’ve made it this far and have still managed a best in the league performance week in and week out, the Eagles are really promoting a “next one up” mentality throughout their roster of players.

Luckily, Darby and second-round draft pick Sidney Jones IV are due back any time now, meaning that the Eagles defensive productivity will soon match their offensive output. So word to the wise, no longer should only the NFC East be afraid, but the entire NFL should be as well.

This phrased mindset refers to how well a team’s substitutes and second-string players can acclimate and produce when called upon following injuries to starters. More specifically, how well Philadelphia’s depth chart has adjusted to such mishaps has been a dimension of its momentum.

Starting with the cornerbacks, former seventh-round pick Jalen Mills has played solidly through his sophomore year with three interceptions and one “pick-six” touchdown return. Veteran corner Patrick Robinson was brought in to help as a rotational player, yet he is now graded as the No. 3 CB with a PFF defensive grade of 91.2.

As for the receiving corps, Nelson Agholor has done a complete 180 in terms of his poor performance last year. With 428 yards and five touchdowns through nine games, Agholor can definitely be considered a candidate for the NFL’s Most Improved award. Meanwhile, fourth-string wide receiver Mack Hollins has shown some flashy playmaking ability while only being a fourth-round steal of a rookie.

Concerning the team’s run game, this is where the Eagles have most notably gone off, even with Sproles’s absence.

Thanks to the many talents of LeGarrette Blount, Corey Clement and Wendell Smallwood, the Eagles are fourth in the NFL in rushing yards per game with a 136.8 average. Oh, and they recently traded for pro-bowl running back Jay Ajayi.

Altogether, this is a team that wants to win, and their coaching staff will do their best to appropriately rotate everyone into the play scheme.

The Art of the Trade

Let’s back track a little bit and comprehend just how much of a robbery it was when the Eagles traded one of their three fourth-round picks to the Miami Dolphins for Ajayi. With a year of NFL play under his belt, Ajayi exploded onto the NFL scene last season.

Ajayi has already been to the Pro Bowl and was considered as high as a top-five running back talent entering the 2017-18 season. So one must begin to question how on Earth a player of Ajayi’s caliber, who averaged 4.9 yards per carry last year, managed to be practically gifted to the Eagles.

Simply put, the answer is Howie Roseman, who is the executive vice president of Philadelphia’s football operations.

Roseman has pretty much been the brains behind most of the great Eagles’ trades since this past offseason. With him bringing in names such as Alshon Jeffery, LeGarrette Blount, Timmy Jernigan and Ronald Darby, it’s clear to see that the office personnel has placed the team in a position to succeed with their key decision-making.

In turn, Head Coach Doug Pederson and defensive coordinator Jim Schwartz have done their best to play these free agents and new players.

As previously mentioned, the Super Bowl is in the back of fans’ and players’ minds alike, and the excitement is definitely brewing as the wins keep stacking up.

However, there’s still much of the season left, and topping the Eagles’ list of priorities would be ensuring a first-round bye come postseason time.