The Daily Nexus
On the Menu
The Third Annual Ramenfest Returns
November 16, 2017 at 12:31 am by Tiffany Velazquez

Sunday welcomed Ramenfest once again at the Kimpton Goodland. An unusually overcast morning, the weather begged for a nice warm bowl of ramen. 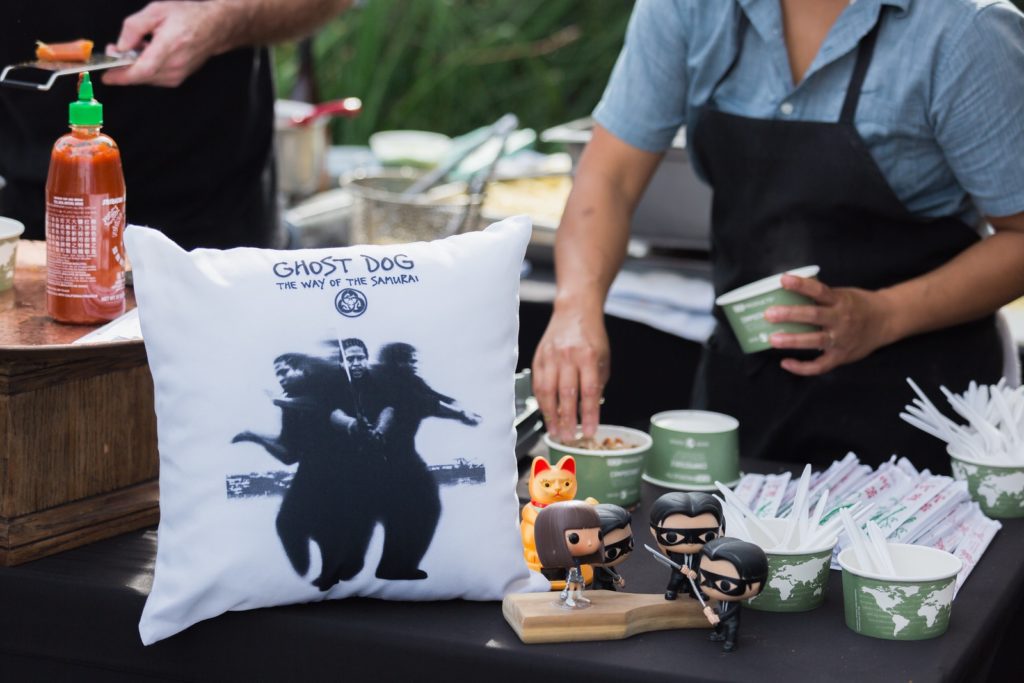 Having attended and been blown away by last year’s event, I was excited to see the interpretations this year’s competitors would take on the classic dish. With freshly prepared ramen and good music courtesy of DJ Darla Bea to set the vibe, I was guaranteed a tasty afternoon.

I chose to start my curious voyage with one of this year’s newest competitors, Industrial Eats, whose table was also conveniently located by the entrance to the event. A duck and smoked salmon ramen, rather than the more commonly used pork belly, the dish also housed a soft boiled egg and scallions topped with a sheet of nori. The duck, while not exactly traditional, provided the dish with a very rich and hearty flavor. Altogether, it was a very enjoyable dish and a perfect start to the day. 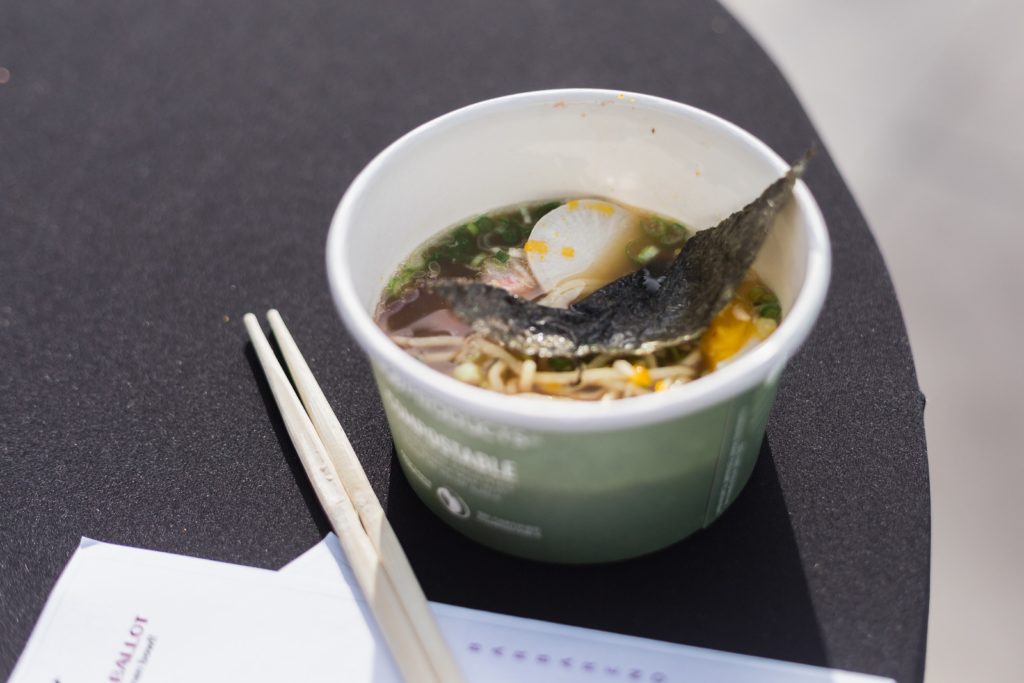 I zigzagged across to the other side of the pool, my next stop being Loquita. The restaurant featured a pork belly ramen with a vibrant soft boiled egg, among other toppings. The dish had a very inviting, warm flavor. It was successful, and although the noodles were somewhat slimy, there was a freshness to it that was unique in itself.

My third and favorite choice — although, my opinion might be biased because of my past experience — was last year’s Ramen King of Santa Barbara, Finch & Fork. An aromatic miso ramen of chashu pork belly, braised mushrooms, house-made togarashi, sliced scallions and an ajitsuke tamago egg, the ramen had very bold and strong flavors. The miso factored in nicely, with the slightly sweet pork belly complimenting its naturally nutty flavor and bringing out the other ingredients. If not for the fact I was only allowed one bowl, I would have gladly gone back for a second helping. 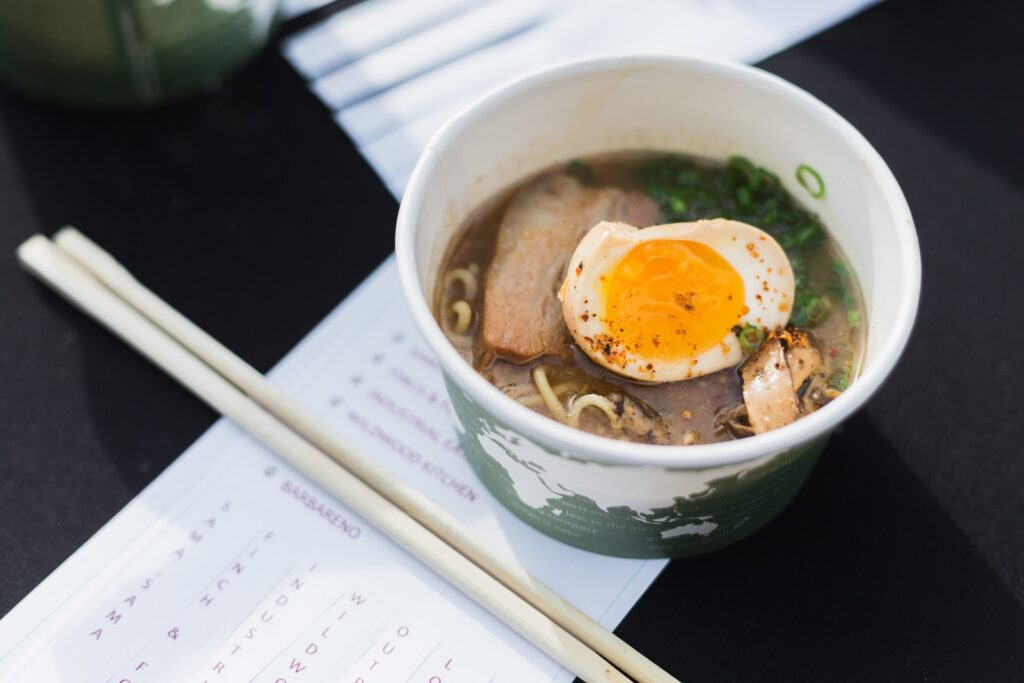 I made my way back around to Outpost, the Kimpton Goodland’s in-house restaurant. It offered a shoyu ramen cooked in kaffir lime leaf with cured pork belly, sautéed mushrooms, green onions and a ramen egg. I opted for a bit of heat in my dish as well by adding pickled Thai chilies. The chili proved to be an excellent choice, and really tied the whole dish together by complimenting the natural heartiness of the mushrooms. The cured pork belly, while understated, offset the newly added heat of the dish in an elegant way, allowing for it to not be overpowered entirely.

My next selection was yet another one of the newcomers, Barbareño, which offered a Central Coast ramen in smoked pork broth with cilantro, pork cheek and house cured bacon. Barbareño opted to include thicker noodles, which created a slightly different flavor. The flavors were overall much more mild than the others, as none of the ingredients really stood out aside from the cilantro. 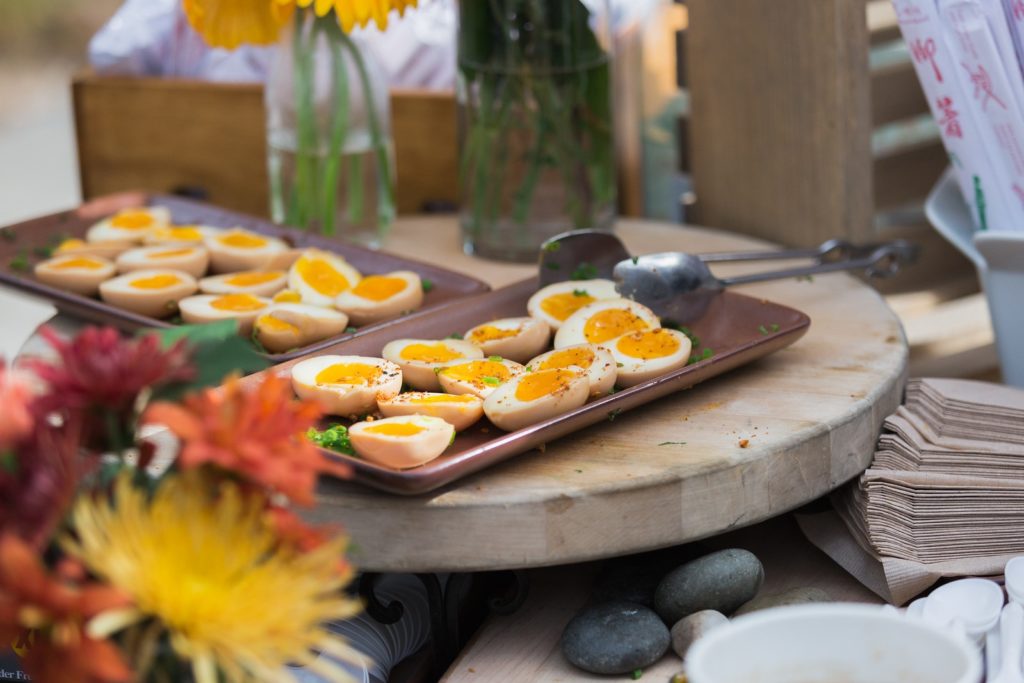 I was excited to try Wildwood Kitchen next, a restaurant that had been unable to attend last year’s event despite being announced as a competitor. With a Top Ramen dumpling, shiitake mushrooms, shoyu-marinated, thinly-sliced chicken breast spiraled with shitake ginger chicken sausage and a marinated soft boiled egg, the dish was definitely the most ambitious in terms of creativity. Unfortunately, it was much better in theory than execution, as the flavors did not quite wow me as I had expected them to. To be perfectly honest, the best part of the dish was not the “ramen” but the chicken sausage.

To round out the day I tried Sama Sama, which boasted a rather long line partly because of the individual preparation of their bowls. The dish offered a tonkotsu miso ramen with sliced pork belly, scallions, torashi noodles, marinated egg, mayu sauce and a nori sheet topping, creating flavors that were understated yet rich. While I could have done with a larger helping of mayu sauce, the crowd really seemed to enjoy the dish nonetheless. 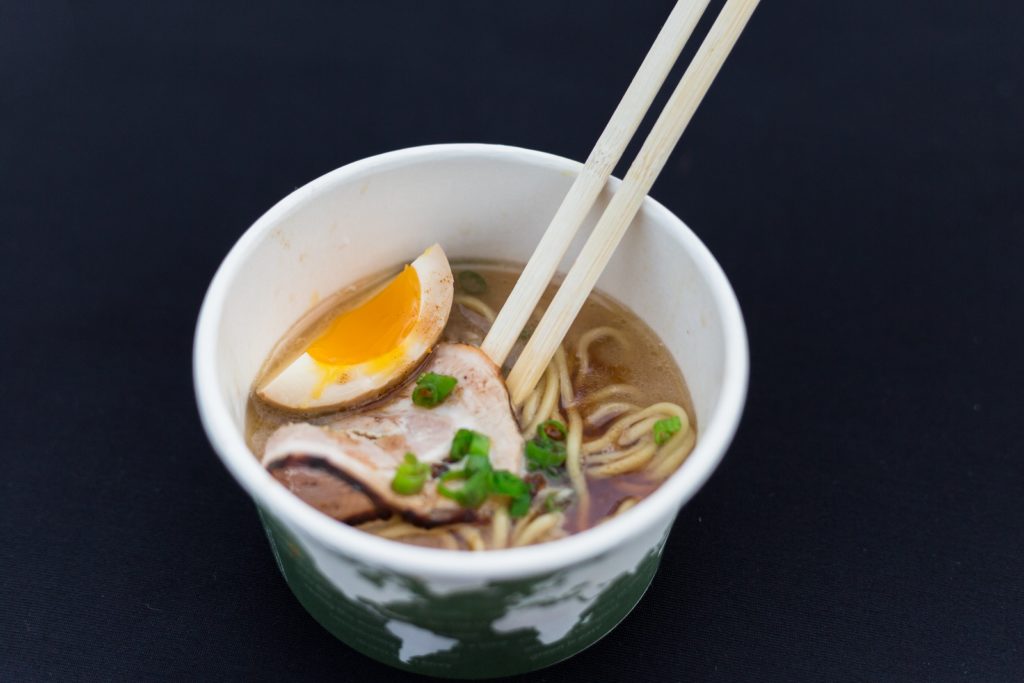 The event met every one of my expectations, and the entire experience was just as great as last year. My only disappointment was not yet being 21 and missing out on Japanese beer, sake and whiskey. I wholeheartedly recommend this amazing event to ramen lovers and newbies alike.

The new Ramen King of Santa Barbara, as decided by the judges, is Industrial Eats! Following close behind was Sama Sama, the winner of the popular vote. 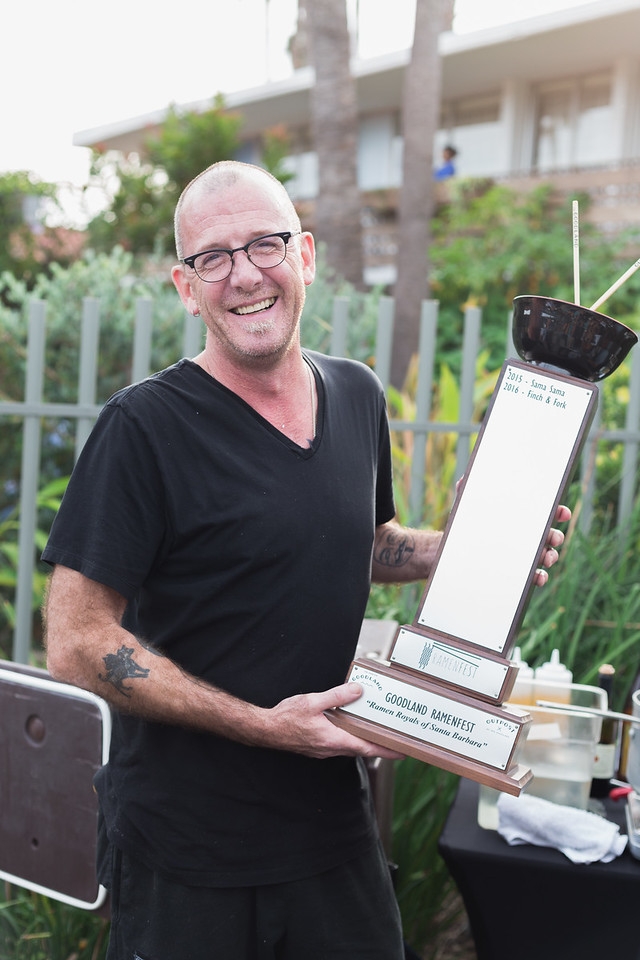