The Daily Nexus
Opinion
Biking On Campus Sucks So Bad
November 15, 2017 at 9:53 pm by Ali Abouesh 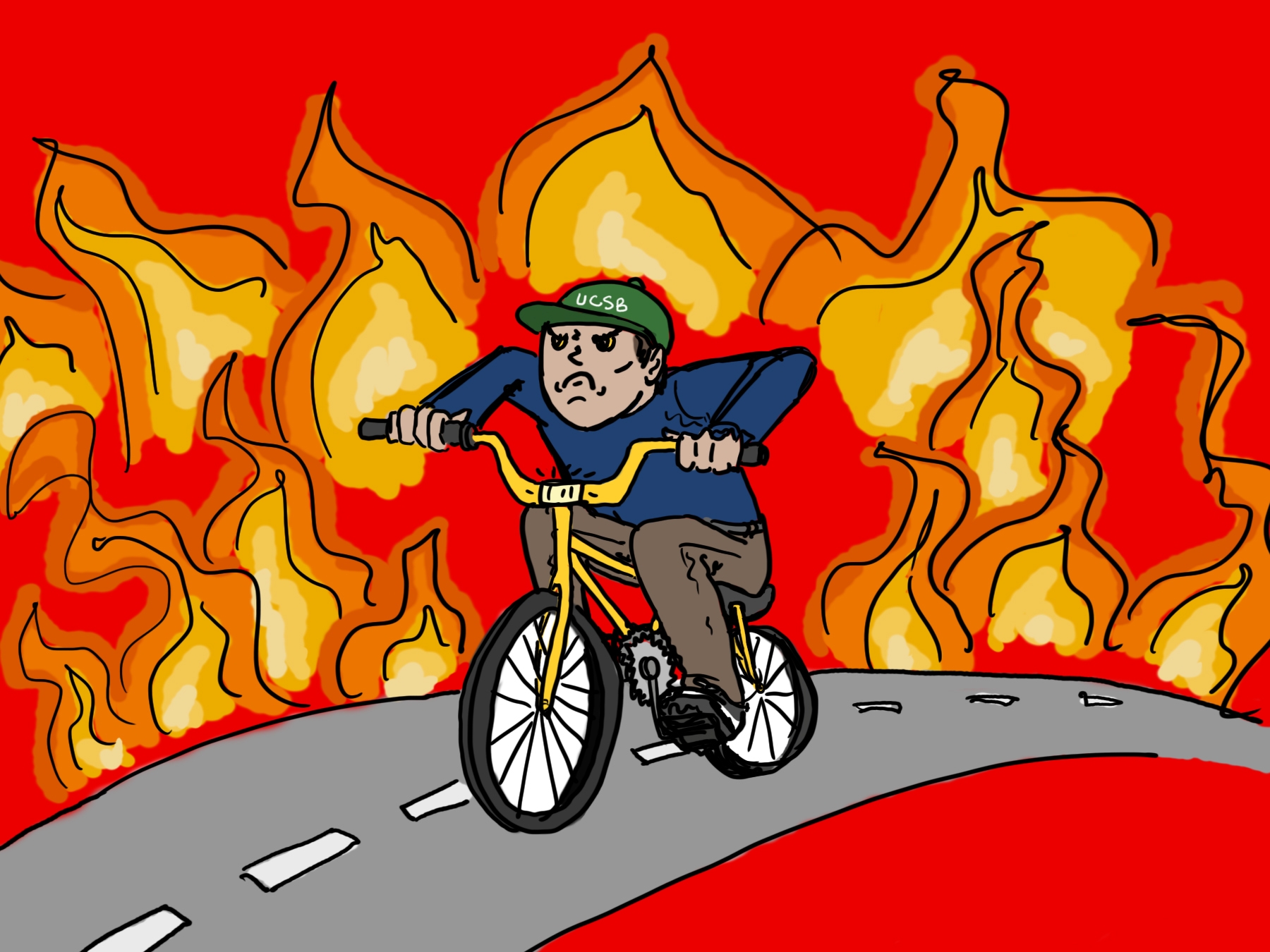 With admissions rising, we are all going to have to get used to the fact that the bike paths have become the venue for UCSB’s newest extreme sport: biking to class. It has gotten to the point to which skydiving and alligator wrestling could be considered safer than biking by Campbell Hall. The way some people at this school ride their bikes makes me wonder if there’s just a large community of people being raised by wolves. It honestly seems like nobody at this school has ever ridden a bike before in their life or even been told rules of basic human behavior. There are some things that people do regularly on the bike path that are dangerous and, almost more importantly, EXTREMELY annoying.

A quick rule of thumb to determine whether you’re making everyone on the bike path secretly wish for you to step on a LEGO every day for the rest of your life is to think of biking like you’re driving a car. If you wouldn’t do something while driving, then there’s absolutely zero reason to do it while biking.

The two modes of transportation are actually pretty similar. There are roundabouts, lanes, traffic and people who have a destination they have to get to in a time crunch. However, unlike driving, we don’t really have any concrete rules on how to act on the bike path. All we have are social norms, and that system is not working. Pretty much the only form of policing we’ve had are Free & For Sale posts dissing the people who act up on the bike paths. The frequency of posts on biking behavior always spikes during the beginning of Fall Quarter since there’s an influx of new freshmen. Now that the quarter is winding down, it’s a good time to talk about room for improvement in our bike-centric culture.

The etiquette for general bike-path use is currently garbage. You wouldn’t drive side by side at 20 miles per hour through downtown during rush hour just to talk to your friend, so why would you do this on a bike path with dozens of people who need to get to class stuck behind you? This happens all the time in the path that goes by Storke Tower and HSSB, and it is one of the worst things. You slow down an entire area of campus just to tell your friend something that could have waited literally five minutes. I can absolutely guarantee that what you have to say is not that important and can wait. This agitates people biking behind you into doing something stupid to get around you since they’re worried about being late.

The next habit I see that I absolutely cannot stand is people who go into the oncoming bike lane to overtake others at peak traffic times. And it’s almost never on the way to the class, it’s always to go back home. But if you are going to be late because two people are biking side by side, that’s just an L that you’re going to have to take. Don’t risk the safety of dozens of other people just because you’re in a hurry. The concepts of lanes on a highway is the same on bike paths. The right lane is for people who don’t want to bike fast and the left lane is for people who do want to bike fast. You don’t bike in the center, you don’t bike side-by-side and you don’t bike into the oncoming lane during peak hours.

The next area that people need to practice proper protocol for are the roundabouts. Look, I get it. They’re difficult even while you’re driving. But there are some things you just shouldn’t do. If it’s late at night and there’s nobody around, you can skip going around the roundabout and go into the oncoming lane. But don’t do it in the middle of the day when a Campbell Hall lecture has just finished up. It’s just stupid, and you put everyone else in a lot of danger just because you don’t want to wait the three seconds that it takes to go around. You wouldn’t want to have to swerve out of the way while you’re driving because some dumpster human wanted to save some time and avoid a U-turn. There’s no reason to make an already difficult area for biking even more dangerous.

Even though I may come off as harsh, I do believe that no biking sin is unforgivable. Unless of course you bike slowly in the middle of the lane at 1:50 p.m., in which case I’ll see you in hell.

The bike path is a common tool; so many of us bike to class, and it is unfair that we have to worry about Sonic the Hedgehog zooming by on a bike and taking all of us out. Just as with the steps we take to make sure students drink alcohol responsibly, we have to take steps to make the bike path safe. The bike path is only going to get more crowded, not less. Safety is going to be a huge problem going forward, so we need to talk about the things that we can do to make it safer to get to class. None of us wear helmets, and we’ve already seen a couple of students get seriously harmed while biking to the point of requiring an ambulance. The protocols that I’ve talked about require very little effort to follow and ultimately will make the bike life a lot easier. Even though I may come off as harsh, I do believe that no biking sin is unforgivable. Unless of course you bike slowly in the middle of the lane at 1:50 p.m., in which case I’ll see you in hell.

Ali Abouesh wants to stop the risky business on bike paths and actually be able to make it to class without getting injured.

What hip checks & elbows are for. If the person you’re about to pass is riding like an idiot & moves over on you, never be afraid to defend yourself, you’ve got the 3 biggest assets on your side: 1) Elbows. 2) Hips. 3) AWARENESS! I had some fool the other day by the music building pull onto the bikepath, all sketchy, saw me coming, but decided the path was all his. Started riding w/ no hands, began weaving & as I was LEGALLY & APPROPRIATELY passing him on the left, he began to swerve into me. Big mistake.Somehow, some… Read more »

Thank you. I agree… I have had plenty of near-death experiences with brain-dead doofuses not looking where they are going, thereby risking a potentially deadly head-on collision in my lane…Other pet peeves 1) riding at night without a white front headlight, 2) using phone held to the head (rather than hands-free) or 3) reading or worse sending texts while bicycling. UCSB Student Health Clinic and all hospital emergency rooms in Santa Barbara sell bicycle helmets for just $10. Please use your head and wear a helmet and protect your investment and ride your bicycle responsibly.

Thanks for writing this. Something that bothers the hell out of me is people in needless rushes passing me on the right. Sometimes they end up running into dirt to not crash into me, who already bikes on the right. My friend started vulgarly calling those people out. I think I will too.

You should always be on the right side of the lane unless you are over taking someone. If someone is passing you on the right, it’s your fault. You are the definition of a bad cycler.