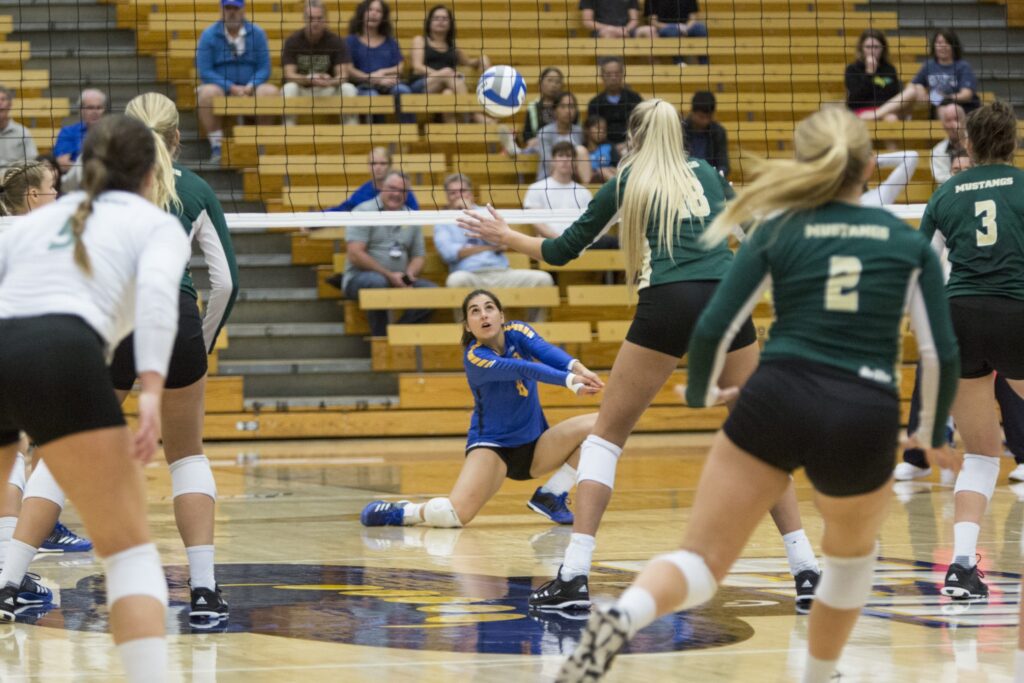 After a serve, Emilia Petrachi kneels to pass the ball. Dustin Harris/Daily Nexus

With the amount of youth this year’s UCSB women’s volleyball team possesses, wins don’t exactly reveal everything about its progression. They’re nice to have, but simple improvement is just as important.

“Honestly, our last match at Cal Poly might be the best match of the year for us. We are improving and playing good volleyball,” she said.

The Gauchos have dropped their last two matches, rematches against Hawaii and Cal Poly, but they showed improvement from the first time around in both cases. For a team with nine underclassmen, that’s a big deal.

UCSB will have a chance to showcase its continued development and maybe pick up a couple wins this weekend. Santa Barbara will play host to UC Irvine on Friday and then UC Davis on Saturday for Senior Night during its final home matches of the season.

The two consecutive losses have knocked the Gauchos (6-17, 5-6) down to fifth in the Big West standings, directly behind the two teams they’ll play this weekend. Just two wins in the Thunderdome, and UCSB will likely find itself back in the top half of the conference.

Five Anteaters have triple-digit kills so far this season, but no attacker has more than 300. It’s a balanced attack, coordinated primarily by junior setter Ali Koumelis and her 883 assists.

“I expect to see a diverse and balanced offense,” Lantagne Welch said. “They have been getting solid production across the board with their experienced outside, their lefty right-side, and they have a really quick attacking middle.”

UC Irvine has won its last two games, both 3-0 decisions, against Cal State Fullerton and UC Riverside. Three games back from Cal Poly, the Anteaters have an outside chance of grabbing a conference championship but must first find a way to overcome the Gauchos.

Following Friday, UC Davis comes to town for UCSB’s Senior Night. The Aggies are 15-11 overall and 7-6 in the Big West, directly above the Gauchos.
UCSB took down the Aggies while on the road back on Oct. 17, but that was a different UC Davis team. UCD has won its last four matches and will look to give Cal Poly its first conference loss the night before it visits Santa Barbara.

“We can take the things we did well [in the first match against UCD], the confidence that we prevailed and, of course, the things that were a little off to improve this time around,” Lantagne Welch said. “Davis is a better team this time around, but definitely we are better now, too.”

Saturday night’s match will be preceded by a Senior Night ceremony for UCSB’s two seniors, defensive specialist Sydney Bast and outside hitter Chanel Hoffman. Bast and Hoffman have served as the Gauchos’ veterans throughout this up-and-down season and earned high praise from their head coach.

“Chanel and Syd are first, and most importantly, great people,” Lantagne Welch said. “They are people you just want to be around. They are my first two recruits ever here at UCSB and have embraced their roles as leaders on this team. They speak up and share experiences and bring extra to the team every day. They truly put the team before themselves, and it has helped the team all year long.”

Playing in their last-ever home matches as Gauchos, Bast and Hoffman will be motivated to finish strong. Their teammates will be similarly motivated to send their seniors out on top, which could prove to be key on Saturday.

“The team will want to give everything they have for Chanel and Syd,” Lantagne Welch said. “They are a huge part of this program and you just want to put everything out on the floor for them.”
The underclassmen have been the focus of this season, but it is those preparing to end their time as Gauchos who will have the spotlight this weekend.

UCSB will face UCI Friday, Nov. 10, and UC Davis Saturday, Nov. 11. Both matches will take place at the Thunderdome at 7 p.m.